The station, which opened in 1908, was staffed by Via Rail until October 2012 when the building was closed. Via Rail passenger trains continue to stop at the station, with checked baggage handled by on-train crew members.

In January 2018, the Town of Amherst announced it had reached a purchase agreement with Via. It will take possession of the building and lease it to allow a local entrepreneur for use as a restaurant, with a plan for its eventual transfer to the entrepreneur through a lease-to-own agreement. As part of the agreement, Via passengers will continue to have access to a waiting area and washrooms, and Via will continue to maintain equipment within the building. The Town has also designated it a Municipal Heritage building. [1]

The Intercolonial Railway (ICR) opened its line from Truro to Moncton on 9 November 1872.

Initially the ICR served Amherst passengers from a station constructed of wood on the same site as the present-day structure. The present structure was opened on 31 August 1908 and is constructed of local red sandstone.

In 1918, the ICR was merged into another federal Crown corporation, the Canadian National Railways (CNR), however to this day, local residents still refer to the Amherst Railway Station as the Intercolonial Railway Station.

In 1978, CN transferred responsibility for passenger rail services to another federal Crown corporation, Via Rail. Via is the owner and operator of the station, which serves the 3 days a week Ocean route.

Several minor modifications have been undertaken to the structure in recent decades, including removing the south wing in 1975, replacing the bottom exterior stone in 1991 with stone from the Roman Catholic Church once located on Prince Arthur Street, and in 1992 new metal exterior doors were installed. 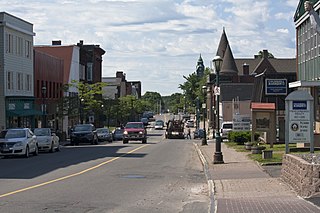 Amherst is a town in northwestern Nova Scotia, Canada, located at the northeast end of the Cumberland Basin, an arm of the Bay of Fundy, and 22 km (14 mi) south of the Northumberland Strait. The town sits on a height of land at the eastern boundary of the Isthmus of Chignecto and Tantramar Marshes, 3 km (1.9 mi) east of the interprovincial border with New Brunswick and 65 km (40 mi) southeast of the city of Moncton. It is 60 km (37 mi) southwest of the New Brunswick abutment of the Confederation Bridge to Prince Edward Island at Cape Jourimain. Amherst is the first town in Nova Scotia, the shire town of Cumberland County, and the largest population centre in the region. 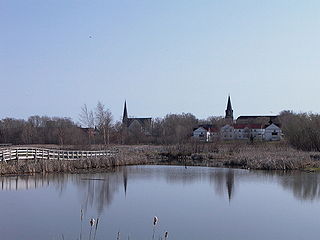 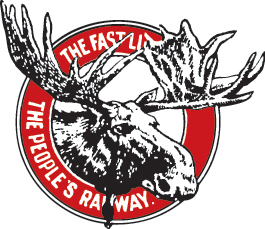 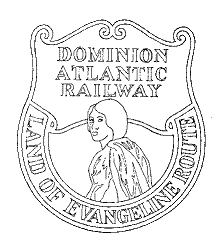 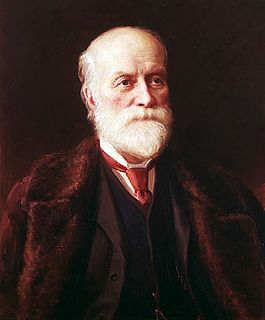 Windsor Junction is a Canadian suburban community in Nova Scotia's Halifax Regional Municipality. It is located 15.6 km (9.7 mi) north west of the HRM urban core and 3 km (1.9 mi) north of the Bedford Basin near the communities of Waverley, Fall River and Lower Sackville. 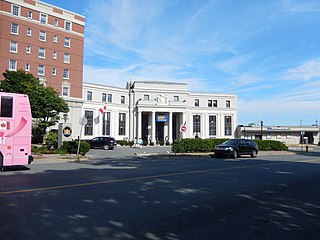 The Sackville station is an inter-city railway station in Sackville, New Brunswick. It is operated by Via Rail. The station was staffed until October 2012. The building is now closed, though Via Rail passenger trains continue to stop at the station. Checked baggage service is now handled by on-train crew members.

Stewiacke station was a railway station in Stewiacke, Nova Scotia, Canada. It served the Intercolonial Railway, Canadian National Railway and later Via Rail. In the 1970s and 1980s, it was served by Budd Rail Diesel Car passenger trains operated by CN and later Via until the end of RDC service in Nova Scotia in 1990. 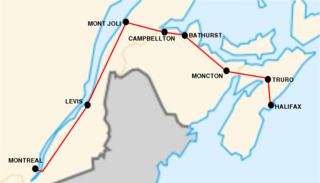