Amy Elizabeth Ray (born April 12, 1964) is an American singer-songwriter and member of the contemporary folk duo Indigo Girls. [1] She also pursues a solo career and has released six albums under her own name, and founded a record company, Daemon Records.

Born in Decatur, Georgia, Amy Ray met Emily Saliers when they both attended the same elementary school. [2] They began performing together and recorded a demo in 1981. After graduation, Ray and Saliers went to different colleges with Ray attending Vanderbilt University. [3] By 1985, both women had transferred to Emory University in Atlanta and formed the Indigo Girls. [3] In 1986, Ray graduated from Emory with majors in English and Religion.[ citation needed ]

In March 2001, Ray released her first solo album, Stag , a southern and punk rock album. The Butchies, a punk band whose members include Kaia Wilson, Melissa York, and Alison Martlew, provided support for five songs, and Joan Jett played on "Hey Castrator". In April 2005, Ray released the softer edged [4] Prom , and in December 2006, she released Live from Knoxville . Her fourth solo album, the melodic [4] Didn't It Feel Kinder, was released in August 2008. Lung of Love, which has more of an indie-rock sound, [4] was released in 2012. [4] [5]

Her backup band for her Stag tour was The Butchies. In 2004, when she embarked on her Prom tour, she brought Les Nuby (guitar), Will Lochamy (drums), and Jody Bleyle (bass). Tara Jane O'Neil replaced Bleyle when she began maternity leave in October. [ citation needed ] Ray's backup band for her 2012 Lung of Love tour was The Butchies. Jenn Stone, former keyboard player for Kesha, also performed on the tour. [5]

In addition to the Indigo Girls [6] [7] and her work as a solo artist, Ray also runs an independent record label, Daemon Records, which she founded in 1990 and which is based in Decatur, Georgia. [7] Some performers signed to Daemon include Girlyman, Magnapop, Nineteen Forty-Five, Michelle Malone, Three Finger Cowboy, Danielle Howle and the Tantrums, Gerard McHugh, New Mongrels, Grady Cousins, The Oblivious, Snow Machine, Utah Phillips and Rose Polenzani.

She often collaborates with The Butchies, a punk band featuring drummer Melissa York and vocalist/guitarist Kaia Wilson. She has contributed the live track "Lucy Stoners" on Calling All Kings & Queens (2001) and the Mr. Lady Records sampler album as well as a live recording of "On Your Honor" on a compilation for Home Alive.

Ray is also an activist involved in multiple political and social causes, including gay rights, low-power broadcasting, women's rights, indigenous struggles, gun control, environmental protection and the anti-death penalty movement among others. She has made several trips to Chiapas, Mexico to support the Zapatista Army of National Liberation.

Justin Vernon (Bon Iver) appears on her 2014 album Goodnight Tender, and she and Vernon continue to maintain a friendship. [9]

Ray was also a judge for the 3rd [10] and 11th Annual [11] Independent Music Awards to support independent artists' careers.

Ray lives in the foothills of North Georgia, where she and her partner, Carrie Schrader, have a daughter, Ozilline Graydon. [12] [13] In March 2021, Ray, a lesbian, spoke on the LGBTQ&A podcast about having gender dysphoria and identifying as genderqueer (though she uses she/her pronouns). [14]

Indigo Girls are an American folk rock music duo from Atlanta, Georgia, United States, consisting of Amy Ray and Emily Saliers. The two met in elementary school and began performing together as high school students in Decatur, Georgia, part of the Atlanta metropolitan area. They started performing with the name Indigo Girls as students at Emory University, performing weekly at The Dugout, a bar in Emory Village.

Become You is the eighth studio album by the Indigo Girls, released in 2002. 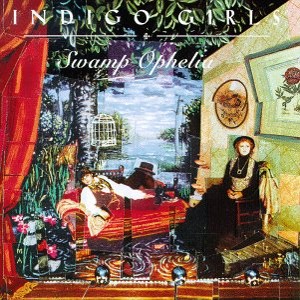 Swamp Ophelia is the fifth studio album by the Indigo Girls, released in 1994.

Emily Ann Saliers is an American singer-songwriter and member of the musical duo Indigo Girls. Saliers plays lead guitar as well as banjo, piano, mandolin, ukulele, bouzouki and many other instruments.

The Butchies were an all-female punk rock band from Durham, North Carolina, that existed from 1998 to 2005. They reunited from their hiatus to tour with Amy Ray of the Indigo Girls promoting Ray's new album in 2010. The frequent focus of their lyrical content concerned lesbian and queer themes.

Melissa York is a rock drummer noted for her work with iconic lesbian bands such Team Dresch, The Butchies, and Amy Ray. She lives in Durham, North Carolina. 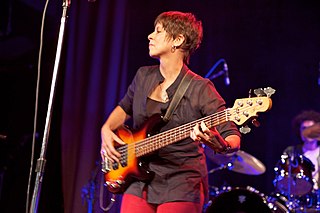 Sara Lee is an English bassist and singer-songwriter, who came to prominence replacing Dave Allen on bass guitar in post-punk band Gang of Four, which she was a member of from 1980 to 1983. She was also a member of Robert Fripp's short-lived band The League of Gentlemen and is also notable for work with B-52s, Ani DiFranco and Indigo Girls. 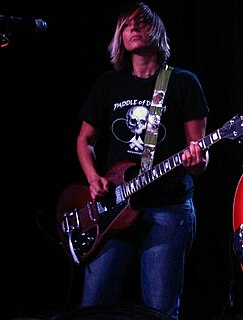 Kaia Lynne Wilson is an American musician from Portland, Oregon, best known as a founding member of both Team Dresch, a revered 1990s queercore punk band, and The Butchies, a pop-rock spin-off from her solo work. In addition to singing, songwriting and guitar, Wilson co-established and operated Mr. Lady Records from 1996 to 2004.

Rites of Passage is the fourth studio album by Indigo Girls, released in 1992. It was reissued and remastered in 2000 with two bonus tracks.

Hazel was an American alternative rock band based in Portland, Oregon. The band was a quartet, consisting of Jody Bleyle, Pete Krebs, Brady Payne Smith (bass), and Fred Nemo (dancer). It lasted from 1992 to 1997.

Nomads Indians Saints is the third studio album by Indigo Girls. Originally released in 1990, it was reissued and remastered in 2000 with three bonus tracks.

Prom is the second solo album by Amy Ray of Indigo Girls, released in 2005 on her Daemon Records label.

Live from Knoxville is the third solo album and first live release by Amy Ray of Indigo Girls, released in 2006 on her Daemon Records label.

Stag is the debut solo album by Amy Ray of Indigo Girls, released in 2001 on her Daemon Records label. On it she is accompanied by The Butchies, the Rockateens, Joan Jett, Josephine Wiggs and Kate Schellenbach. She attributes the Butchies with contributing a punk rock influence to some of the songs.

Poseidon and the Bitter Bug is the 11th studio album by Indigo Girls, released on March 24, 2009 by Vanguard Records. The title is drawn from lines in tracks "Fleet of Hope" and "Second Time Around" – "You're all washed up when Poseidon has his day" and "I've been bitten by the bitter bug." 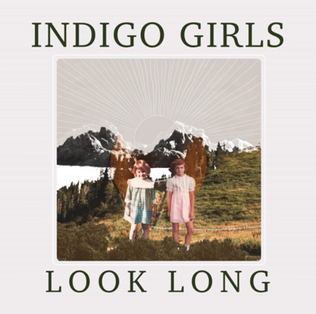 Look Long is the fifteenth studio album by American folk rock duo Indigo Girls. The album was originally due to be released on April 24, 2020, but was delayed until May 22, 2020. The album has had a positive reception from critics.