Andrea Prodan (born 16 November 1961) is a Scottish-Italian film actor, composer and musician. He is the younger brother of rock star Luca Prodan, notorious for his musical career in Argentina, leading the rock band Sumo.

The Prodan family, after suffering internment in a Japanese concentration camp during World War II, was expelled from China due to Mao. Andrea's Italian father was an author and talented sportsman, and had run a prosperous business, with expertise in ancient Chinese pottery. His mother is Scottish.

The family moved to Rome and Tuscany in 1948, where Andrea spent his early years. He was educated in England, and aged 12, became head chorister at The King's School, Canterbury. As solo voice he recorded "A Song for All Seasons". He started in films as a sound assistant on Krull and also on The Vatican Story , with Gregory Peck.

In 1983, he dropped out of Exeter University to join his elder sister Michela on the set of Italian International Films production in Monastir, Tunisia, producing with NBC a sequel to Franco Zeffirelli's Jesus of Nazareth . A.D., an NBC miniseries, the story of the Acts of the Apostles was directed by Stuart Cooper. Andrea Prodan became (for two years), the assistant operator and interpreter for the Italian director of photography, Ennio Guarnieri. A.D. stars included Ava Gardner, James Mason, Denis Quilley and Fernando Rey. He played alongside Ava Gardner as "Britannicus". During that time he filmed a short film, in the Sahara, which won an ICA prize in 1984. He went on to work with Federico Fellini on a series of rare commercials directed by the film giant, and lit by Guarnieri.

Fluent in English and Italian, Andrea Prodan pursued a career mainly in Italian films. In 1985, he appeared in Giochi d'Estate and as a co-protagonist in the film The Berlin Affair (Interno Berlinese) by Liliana Cavani. Following this he appeared in films with the Taviani brothers ( Good Morning, Babylon ) and Peter Greenaway (Il ventre dell'Architetto - The Belly of an Architect ). In 1987, he played the role of Ettore Majorana in the film I ragazzi di via Panisperna by Gianni Amelio. There followed work with various directors such as Giuseppe Bertolucci, Guido Chiesa, and Alex and Fiorella Infascelli. In 1999 he played Karl in Ricky Tognazzi's Canone inverso .

In 1991, he played the mentally disabled but handsome "Marco", who breaks up a romance between characters played by Bruno Ganz and teaming up, once again, with Ornella Muti in the third mysterious short story of La Domenica Specialmente. Muti and Prodan had become friends on the set of 'A Season of Giants', a U.S. mini-series in which he portrayed renaissance painter Raphael, and Muti his muse, Onoria.

In 1995, he travelled to Argentina and with the Argentinian post-punk experimental group Las Pelotas supported The Rolling Stones in his first visit to this country in River Plate Stadium, and with Felix Valls at the console, recorded "Viva Voce", a record in which he impersonates all the instruments, using nothing but his voice. The disc received warm reviews and the musician Peter Gabriel called it his favourite record of the year. In 2001, Andrea decided to settle in Argentina. In 2005, he worked with Emmanuele Crialese in the film Nuovomondo, winner of the Leone d'Argento at the Venice Film Festival (2006). He composed the film score for two Argentinian films (El jardín primitivo and Caballos en la ciudad) and for innumerable advertising spots. A series of TV commercials in which he depicts the fictitious, toothy, comic character 'Al Dentice' was aired nationwide in Italy. He lives in Buenos Aires and in Córdoba, Argentina and has three children. He heads the rock band Romapagana and hosts the radio shows Metiendo Púa, and "Parcialmente Nublado". He is also a point of reference regarding his brother, Luca, who died in 1987. On 31 December 2009 Romapagana released their first album, which was recorded by Mariano Iezzi in CCCI Studios, Buenos Aires, Argentina. The band's second album, "Vívido", was released in November 2016. He directed the play 'Imarca' the same year. In 2019 he edited the record 'Freshness of Surprise' under the alter-ego of Dre Dre Bondang. 2019 also saw the birth of a musical group dedicated to the enthusiastic evocation of David Bowie's tremendously varied musical legacy, it is called 'Bowie ReMembered' and operates from Buenos Aires. Despite 2020's global 'Lockdown' Prodan enters a period of great activity, releasing his second album as Dre Dre Bondang: 'TWO', as well as recording a spate of new songs with Celina Varela and with his Supergroup: 'Bowie ReMembered'. 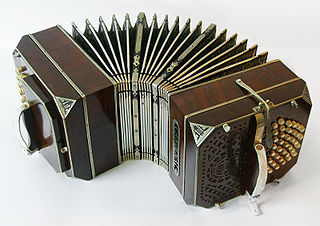 Tango is a style of music in 2
4 or 4
4 time that originated among European immigrant populations of Argentina and Uruguay. It is traditionally played on a solo guitar, guitar duo, or an ensemble, known as the orquesta típica, which includes at least two violins, flute, piano, double bass, and at least two bandoneóns. Sometimes guitars and a clarinet join the ensemble. Tango may be purely instrumental or may include a vocalist. Tango music and dance have become popular throughout the world.

Argentine rock is rock music composed or performed by Argentine bands or artists mostly in Spanish.

Ramón Bautista Ortega is an Argentinian singer and actor, better known as Palito Ortega. Ortega is an icon of Argentinian popular music, and is considered one of the main representatives of the musical style called New wave that marked the Hispanic-American music between the years '60 and '70. He reached international fame, particularly in Latin America and Spain, during the 1960s, when the rock en español style of rock and roll music was popularised among teenagers in the region. 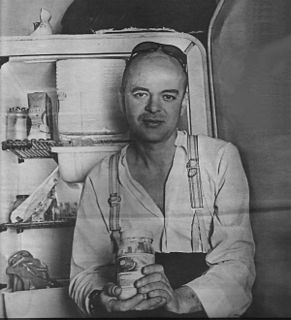 Luca Prodan was an Italian-Scottish musician and singer who rose to fame as the leading vocalist of Sumo, one of the most influential rock bands of Argentina, and is widely considered as one of the country's most important artists. He was the older brother of film actor and composer Andrea Prodan. María Cristina Lancelotti, better known by her stage name Valeria Lynch, is an Argentine singer and actress. Named by the New York Times as one of the 5 best voices on the planet.

Sumo was a 1980s Argentine alternative rock band, heavily influenced by post-punk and reggae. Led by Italian-born Luca Prodan, it remained underground for most of its short activity but was extremely influential in shaping contemporary Argentine rock. Sumo is credited with introducing British post-punk to the Argentine scene, mostly by songs with lyrics in English, and with providing a visceral counterpoint to the progressive and nueva canción influences then dominant in the country's rock en español. 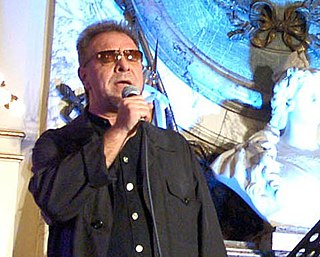 Raúl Alberto Antonio Gieco, better known as León Gieco is an Argentine folk rock performer, composer and interpreter. He is known for mixing popular folkloric genres with Argentinian rock and roll, and lyrics with social and political connotations. This has led to him being called "The Argentine Bob Dylan". 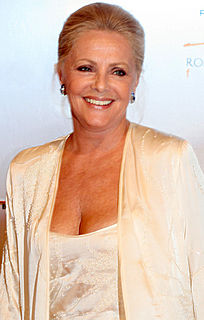 Virna Pieralisi, better known as Virna Lisi[ˈvirna ˈliːzi], was an Italian actress. Her international film appearances included How to Murder Your Wife (1965), Not with My Wife, You Don't! (1966), The Secret of Santa Vittoria (1969), Beyond Good and Evil (1977), and Follow Your Heart (1996). For the 1994 film La Reine Margot, she won Best Actress at Cannes and the César Award for Best Supporting Actress. 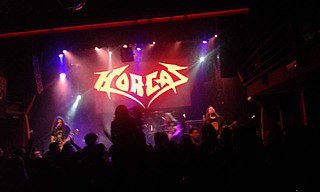 Horcas is a heavy metal band from Argentina created in 1988 by Osvaldo Civile, former guitarist for V8, Argentina’s landmark heavy metal outfit in the 1980s. After quitting V8 in 1985, and impressed by the new generation of thrash metal bands from the Bay Area led by Metallica, Civile set out to put together a new group in that line. That seminal project, which included former V8 bandmate Gustavo Rowek on the drums, was however delayed for a number of reasons, and it was not until 1988 that it could definitely take off. By that time though, put off by the incessant postponements, Rowek had joined another former V8 member, Walter Giardino, in his new project Rata Blanca.

Soda Stereo was an Argentine rock band created in Buenos Aires in 1982. It achieved international success throughout the 1980s and 1990s, and the group is regarded as the most important and influential Spanish-language band ever and a legend in Latin music. The power trio consisted of Gustavo Cerati, Héctor "Zeta" Bosio (bass), and Charly Alberti (drums).

En Vivo en Buenos Aires Released in 1994 is the ninth album and first live one from the Argentine ska reggae Latin rock band Los Fabulosos Cadillacs. It was well received and earned a gold disc.

Antonio Rodrigo Guirao Díaz is an Argentine actor and musician, of TV, films, and theatre.

Sebastian Schneider is a German Argentine guitar player, multi-instrumentalist, singer-songwriter and music producer. He began his career in the Argentine and Latin American rock scene playing in several rock bands and later began his solo career in 2004. 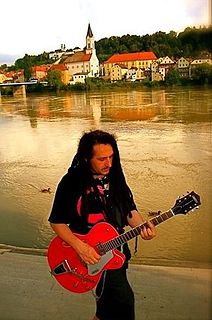 Goy Karamelo is an Argentinian folk singer of Jewish origin. He sings in Spanish, English, and occasionally in other languages. Karamelo began his musical career with Perfectos Idiotas, an Argentinian group that combined several musical styles and languages. He founded the band Karamelo Santo in 1993, and became a solo artist after its breakup in 2009. 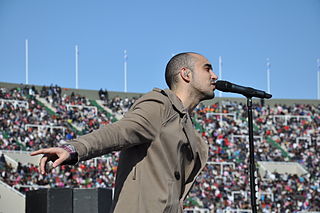 Abel Pintos, is an Argentinian singer-songwriter. He started his solo career at the age of 13 with his album Para cantar he nacido, supported financially by León Gieco. After the release of four studio albums, he started writing his own songs that marked a departure from his folk style. 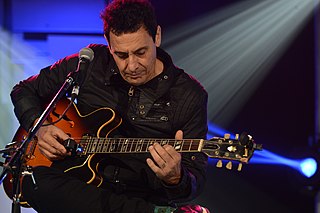 Ricardo Mollo is a musician, producer, singer and composer of Argentinian rock. 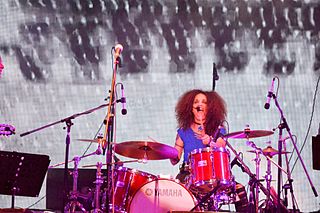 Andrea Álvarez is an Argentinean drummer, percussionist, singer and composer. She was part of Rouge, the first all female Argentine rock band, and accompanied many nationally and internationally renowned artists.