Andy Cutting (born 18 March 1969) is an English folk musician and composer. He plays melodeon and is best known for writing and performing traditional English folk and his own original compositions which combine English and French traditions with wider influences. [1] [2] He is three times winner of the Folk Musician of the Year award at the BBC Radio 2 Folk Awards and has appeared on around 50 albums, both as a solo artist and in collaboration with other musicians. [2] He was born in Harrow, London [3] and is married with three children.

Starting playing the melodeon in his early teens, Cutting was invited to join a local ceilidh band, Happenstance, when he had been playing for only a few months.[ citation needed ] In 1988 he joined the influential and innovative band Blowzabella (which also featured Nigel Eaton, with whom Cutting has since collaborated). Cutting made one album (Vanilla) with Blowzabella before they broke up in 1990. Their repertoire, blending English traditional music with that of central France and Eastern Europe, had a great influence on Cutting. [4] Blowzabella subsequently reformed; they celebrated their 25th anniversary in 2003, with Cutting once again an official member. [4] They released the album Octomento in 2007. [5]

In 1989 Cutting formed a partnership with Chris Wood, whom he had met two years earlier at Sidmouth Folk Festival. They toured extensively over several years, reuniting in August 2010 for the Towersey Village Festival and have made five albums together. Wood introduced Cutting to a wealth of Québécois music and shared his love of English and French dance music. [6] [4] Wood & Cutting, together with Karen Tweed and Ian Carr, make up the Two Duos Quartet, who have made one album, Half as happy as we.

Tweed & Cutting have also worked as a duo; they have made one album together and contributed to a live CD, Across the Waters, recorded at Cork University in 1994.

Cutting works regularly as a session musician, with artists as diverse as Sting, June Tabor and Chumbawamba. He has been a member of several bands, including Fernhill and Tanteeka. As well as the Wood & Cutting duo, he is part of the trio 1651 (with Mark Emerson and Tim Harries), the John McCusker Band, the Kate Rusby Trio and the Kate Rusby Band. [7] [8] He is also a popular workshop tutor and has taught at summer schools for Folkworks. [9]

In March 2011, Cutting was part of the Cecil Sharp Project, a joint commission between Shrewsbury Folk Festival and EFDSS that saw him and seven other modern folk musicians take part in a week-long residential project to create new works related to life and works of folk collector Cecil Sharp. [10]

Andy Cutting is part of Leveret, with Sam Sweeney and Rob Harbron. The trio formed in 2014 [11] and have been described by The Guardian as "magical", and Cutting as a "melodeon and accordion virtuoso". [1] In 2018 The Arts Desk named Leveret's album, Inventions one of their top 3 albums of the year, describing them as creating "strikingly new English instrumental music." [12]

Cutting also performs and records as Simpson Cutting Kerr with guitarist Martin Simpson and fiddle player Nancy Kerr. Their debut CD Murmurs was well received with The Telegraph naming it one of the best folk albums of 2015, describing them as "three of Britain’s finest musicians and interpreters of songs and tunes, each an acknowledged virtuoso in their own right". [13]

Cutting has composed many tunes, several of which have been recorded by other artists. Some have passed into the music session repertoire. His compositions include:

In 2009 Fulmine from Vanilla was included in Topic Records 70-year anniversary boxed set Three Score and Ten as track twenty one on the seventh CD.

Cutting contributed tunes and a biographical essay to:

Edward II are an English band which play a fusion of world music, English folk and reggae. Active from 1980, the band broke up after losing several key members in 1999, relaunching as "e2K" in 2000. In 2003, the band dissolved once more, but have since reformed for a one-year reunion tour in 2009 under the "Edward II" name, celebrating the tenth anniversary of the breakup of the original band. They reformed in 2015 specifically to produce the Manchester's Improving Daily project, which includes the release of new recorded material and a book. The project is designed to celebrate a collection of tunes written in Manchester during the Industrial Revolution, published as Broadsides and currently held in Manchester Central Library. 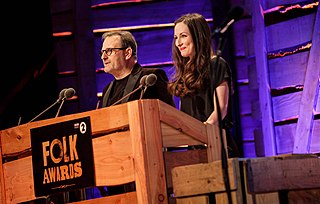 The Old Swan Band is a long-established and influential English country dance band.

Dark Fields is the sixth studio album by English acoustic roots duo Show of Hands, released in 1997 on their own label Hands on Music. The album follows the duo's 1996 performance at the Royal Albert Hall in London, a performance which raised their profile. A live album of the performance was released as Live at the Royal Albert Hall in August, becoming the band's best selling album. The duo followed the success with Dark Fields.

Chris Wood is an English songwriter and composer who plays fiddle, viola and guitar, and sings. He is an ardent enthusiast for traditional English dance music, including Morris and other rituals and ceremonies, but his repertoire also includes much French folk music and traditional Québécois material. He worked for many years in a duo with button accordion/melodeon player Andy Cutting: Wood & Cutting were one of the most influential acts on the English folk music scene. Q Magazine gave their "Live at Sidmouth" album four stars and put the duo "at the forefront of the latest wave of British music acts". One of his first recordings was playing bass and percussion on "Jack's Alive" (1980) the first album by the Oysterband.

Roger Wilson is an English folk singer, fiddler, guitarist, and songwriter who, he says, abandoned a graphic design career to become a full-time musician in 1986. He was a member of The House Band (1993–98) and later joined Chris Wood and Martin Carthy in performances. He has also worked with Kate Rusby's Concert Party, with Pete Morton in Urban Folk, and with John Tams at the National Theatre. 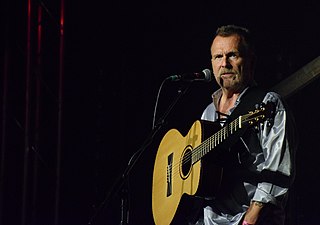 Martin Stewart Simpson is an English folk singer, guitarist and songwriter. His music reflects a wide variety of influences and styles, rooted in Britain, Ireland, America and beyond. He builds a purposeful, often upbeat voice on a spare picking style.

Magpie Lane is an English folk group, based in Oxford, England.

Home Service is a British folk rock group, formed in late 1980 from a nucleus of musicians who had been playing in Ashley Hutchings' Albion Band. Their career is generally agreed to have peaked with the album Alright Jack, and has had an influence on later work. John Tams and several other members of the band, have had solo careers and worked in other projects. In 2016 John Kirkpatrick replaced Tams as main singer in Home Service, and features as such on their next album. 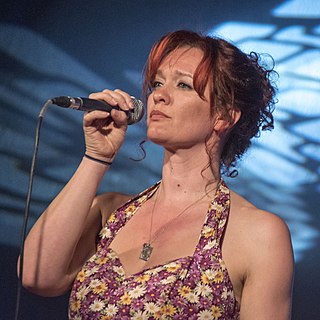 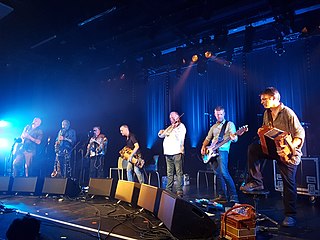 Blowzabella is an English band who play bagpipes, hurdy-gurdy and an array of acoustic instruments to produce a driving, drone-based sound influenced by British and European traditional dance music. Many of their tunes have become standards in the modern folk repertoire. 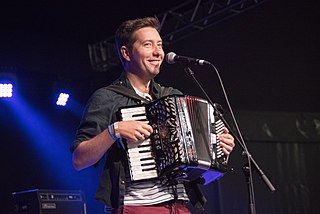 Jim Causley is an English folk singer, songwriter, and musician from Devon who specializes in the traditional songs and music of the West Country. Journalist Colin Irwin has called him "the finest singer of his generation".

Nigel Eaton is a European musician specialising in playing the Hurdy-Gurdy. He originally played the cello but switched to the hurdy-gurdy in 1981 when his father, Christopher Eaton, began making them. He was a member of Whirling Pope Joan with Julie Murphy, also Blowzabella, and Ancient Beatbox, The Duellists and Firestarters of Leiden which had to stop performing because of Brexit. He has released two solo albums, The Music of the Hurdy-Gurdy (1987) and Pandemonium (2002), and has been featured on recordings by other artists including Jimmy Page and Robert Plant, Scott Walker, Shelleyan Orphan, Heidi Berry, Gary Kemp, Bombay Bicycle Club, Carl Davis, Blue Aeroplanes, Martin Simpson, The Palladian Ensemble, Moya Brennan, Robert Plant,, Maddy Prior, June Tabor, Silly Sisters, The Tavener Consort, Hamish Moore, Afro Celt Sound System's "Release", and many works by Loreena McKennitt. Eaton had a Hurdy Gurdy concerto written for him by Howard Skempton, which he performed with Evelyn Glennie, and has performed with The Scottish Chamber Orchestra and The Bournemouth Sinfonietta. Eaton's film work as a session musician has included Robin Hood, The Shipping News, Kingdom of Heaven, Aliens, Mansfield Park, and Tulip Fever. 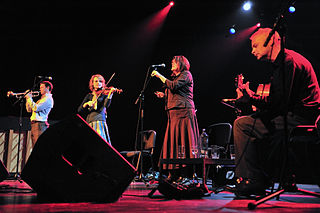 Fernhill is a Welsh folk band, formed in 1996. They have been described by music critic and journalist Colin Irwin, as "highly regarded, innovative cultural ambassadors for Wales and its folk music, having toured in over 20 countries in four continents". Their style is described as "intimate enough with the tradition, that they are unafraid to stretch its boundaries." Stephen Rees has said of them "Their work has not only been unique but has moved and changed also over the years. They are impossible to imitate."

Sue Harris is an English musician classically trained as an oboeist, but best known for her folk music performances with the hammered dulcimer. 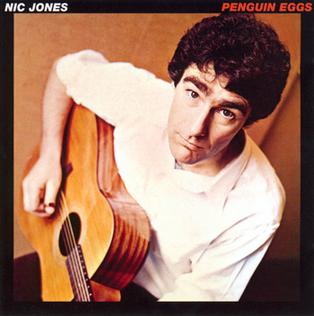 Penguin Eggs is the fifth and final studio album by English folk musician and singer Nic Jones, released by Topic Records in 1980. After establishing himself as a sought after figure on the British folk revival scene, Jones recorded Penguin Eggs with producer Tony Engle; it consists of traditional folk songs arranged by Jones. Exemplified throughout the album is Jones' intricate acoustic guitar playing style, characterised by a distinctive, percussive plucking style and use of open tunings. He also plays fiddle on one song, while he is joined on many tracks by Tony Hall on melodeon and Bridget Danby on recorder.

Shrewsbury Folk Festival is an annual festival of folk and world music and traditional dance held in the town of Shrewsbury in Shropshire, England.