Topic Records is a British folk music label, which played a major role in the second British folk revival. It began as an offshoot of the Workers' Music Association in 1939, making it the oldest independent record label in the world. [2]

The label began as an offshoot of the communist led Workers' Music Association in 1939, selling Soviet and left-wing political music by mail order. [2] After a period of relative inactivity in the Second World War, production resumed in the later 1940s, moving towards traditional music for the emerging revival market. [2] Up to 1949 the composer Alan Bush was involved with choral and orchestral music released on the label. Topic also produced some of the first American blues records to be commercially available in Britain. [3] From about 1950 the two key figures of the second revival, Ewan MacColl and A. L. Lloyd, became heavily involved, producing several records of traditional music. One of the earliest albums of UK traditional music was Street Songs and Fiddle Tunes of Ireland by Margaret Barry and Michael Gorman, issued in 1958.

With the decline of British Communist Party membership in the late 1950s, financial aid to the label began to dry up and, under director Gerry Sharp, they were forced to pursue an entrepreneurial strategy to survive. [2] In the early 1960s, Topic Records separated from the Workers' Music Association, but those involved still had socialist credentials. A new company was registered in 1963. Financially, the company was in a precarious state until that year, when they had substantial sales from the album The Iron Muse , a ground-breaking thematic [4] :29 programme of industrial folk songs. [2] This success allowed them to produce a greater and wider range of records until tastes began to radically change again in the 1970s.

After the arrival of managing director Tony Engle, Topic released a series of albums by ground breaking artists including Nic Jones, Dick Gaughan, The Battlefield Band, as well as major figures on the folk scene including Martin Carthy and Roy Harris. They also began to reissue their back catalogue on cd. In the late 1990s, with the resurgence of traditional folk, spearheaded by children of the revival like Eliza Carthy, Topic managed to gain both commercial and critical success. In the inaugural BBC Radio 2 Folk Awards in 2000 the label received the Good Tradition Award in recognition of their role in the folk music movement. [5]

Other major figures who recorded for Topic included Peggy Seeger, The Watersons, Shirley Collins, June Tabor and John Tams. [2] The breadth of the Topic catalogue was evident in the release of The Voice of the People (1998), a twenty-part series sampling the earliest and greatest of folk singers of the British Isles.

In 2009, the label celebrated 70 years of activity with the release of a seven-CD hardback book set entitled Three Score & Ten - A Voice To The People .

In 2012, this venerable old label began to re-release many of the LPs from its early catalogue in digital form. However, in a departure from the norm, it accompanied the music with a digital booklet containing all the original artwork and sleeve notes from the original album. These are downloadable free from their website.

The label's 70th anniversary was marked by the issue of a boxed set Three Score and Ten, A Voice to the People consisting of a 108-page book and 7 CDs from their back catalogue. Alexis Petridis said in The Guardian , "not bad for a Marxist party offshoot that started in a basement". [7]

Martin Carthy MBE is an English folk singer and guitarist who has remained one of the most influential figures in British traditional music, inspiring contemporaries such as Bob Dylan and Paul Simon, and later artists such as Richard Thompson, since he emerged as a young musician in the early days of the folk revival. 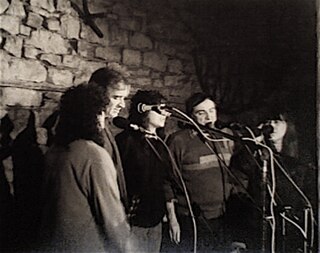 The Watersons were an English folk group from Hull, Yorkshire. They performed mainly traditional songs with little or no accompaniment. Their distinctive sound came from their closely woven harmonies.

Towersey Festival is an annual festival of folk, world music and traditional dance, previously held in the village of Towersey, now relocated to neighbouring Thame in Oxfordshire, England. It has taken place every August bank holiday weekend since its founding in 1965.

Waterson–Carthy are an English folk group originally comprising Norma Waterson on vocals, her husband Martin Carthy on guitar and vocals and their daughter Eliza Carthy on fiddle and vocals.

Elaine "Lal" Waterson was an English folksinger and songwriter. She sang with, among others, The Watersons, The Waterdaughters and Blue Murder. She was born in Hull, East Riding of Yorkshire. In 1998, she died suddenly in Robin Hood's Bay, of cancer diagnosed only ten days before. 'Lal Waterson's voice was stark but captivating, her songs lyrically ambitious and melodically powerful.'

Norma Christine Waterson is an English musician, best known as one of the original members of The Watersons, a celebrated English traditional group. Other members of the group included her brother Mike Waterson and sister Lal Waterson, a cousin John Harrison, and in later incarnations of the group her husband Martin Carthy.

British folk rock is a form of folk rock which developed in the United Kingdom from the mid 1960s, and was at its most significant in the 1970s. Though the merging of folk and rock music came from several sources, it is widely regarded that the success of "The House of the Rising Sun" by British band the Animals in 1964 was a catalyst, prompting Bob Dylan to "go electric", in which, like the Animals, he brought folk and rock music together, from which other musicians followed. In the same year, the Beatles began incorporating overt folk influences into their music, most noticeably on their Beatles for Sale album. The Beatles and other British Invasion bands, in turn, influenced the American band the Byrds, who released their recording of Dylan's "Mr. Tambourine Man" in April 1965, setting off the mid-1960s American folk rock movement. A number of British groups, usually those associated with the British folk revival, moved into folk rock in the mid-1960s, including the Strawbs, Pentangle, and Fairport Convention.

Oak was an English folk band in the early 1970s.

Progressive folk was originally a type of American folk music that pursued a progressive political agenda, but in the United Kingdom the term became attached to a musical subgenre. The latter describes a substyle of contemporary folk that draws from post-Bob Dylan folk music and adds new layers of musical and lyrical complexity, often incorporating various ethnic influences.

Blue Murder is an occasional English folk supergroup, consisting at various times of various members of Swan Arcade, Coope Boyes and Simpson, Waterson–Carthy and The Watersons.

Nancy Kerr is an English folk musician and songwriter, specialising in the fiddle and singing. Born in London, she now lives in Sheffield. Kerr is a Principal Lecturer in Folk Music at Leeds Conservatoire. She is the daughter of London-born singer-songwriter Sandra Kerr and Northumbrian piper Ron Elliott. She was the 2015 BBC Radio 2 Folk Awards "Folk Singer of the Year".

The British folk revival incorporates a number of movements for the collection, preservation and performance of folk music in the United Kingdom and related territories and countries, which had origins as early as the 18th century. It is particularly associated with two movements, usually referred to as the first and second revivals, respectively in the late 19th to early 20th centuries and the mid-20th century. The first included increased interest in and study of traditional folk music, the second was a part of the birth of contemporary folk music. These had a profound impact on the development of British classical music and in the creation of a "national" or "pastoral" school and led to the creation of a sub-culture of folk clubs and folk festivals as well as influential subgenres including progressive folk music and British folk rock.

British rhythm and blues was a musical movement that developed in the United Kingdom between the late 1950s and the early 1960s, and reached a peak in the mid-1960s. It overlapped with, but was distinct from, the broader British beat and more purist British blues scenes, attempting to emulate the music of American blues and rock and roll pioneers, such as Muddy Waters and Howlin' Wolf, Chuck Berry and Bo Diddley. It often placed greater emphasis on guitars and was often played with greater energy.

Music of the United Kingdom began to develop in the 1950s; from largely insular and derivative forms to become one of the leading centres of popular music in the modern world. By 1950 indigenous forms of British popular music, including folk music, brass and silver bands, music hall and dance bands, were already giving way to the influence of American forms of music including jazz, swing and traditional pop, mediated through film and records.

Three Score and Ten: A Voice to the People is a multi-CD box set album issued by Topic Records in 2009 to celebrate 70 years as an independent British record label.

Bright Phoebus, fully titled Bright Phoebus: Songs by Lal & Mike Waterson, is a folk rock album by Lal and Mike Waterson. It was recorded in May 1972 with musical assistance from various well-known members of the British folk rock scene. The album failed to make an impact on its original release, but it was subsequently championed by many musicians, including Billy Bragg, Arcade Fire, Richard Hawley and Jarvis Cocker. For years the album was difficult to obtain but in 2017, a re-release of Bright Phoebus was announced.

Bob Davenport is an English traditional folk singer who has been a leading and influential voice in the British folk revival since the early 1960s.