Harper began his professional playing career with Sydney City in 1986, their last season in the National Soccer League. [1] [2] Harper spent the 1987 National Soccer League season playing for Sydney Olympic. In January 1989, Harper signed for St George after spending much of 1988 travelling in Europe. [3]

After several years with St George, Harper was sold to Marconi-Fairfield for an $18,000 transfer fee. [4]

In the 1993 NSL grand final, Harper scored from a penalty kick to give Marconi a 1–0 win over Adelaide City. [5]

In 1997, Harper signed a two-year deal with the Brisbane Strikers. He cited a desire to continue commentating for the Special Broadcasting Service (SBS) as a motivation for staying in Australia, despite overseas interest. [6]

After retiring in 2001 Harper has written three books, the most popular being (Johnny Warren's biography), Sheilas, Wogs and Poofters, The Incomplete Biography of Johnny Warren & Soccer in Australia. [11] [12] [13]

In June 2020 he completed a doctoral thesis titled "Australia’s Power Structures and the Legitimisation of Soccer (2003-2015)" as part of his Doctor of Philosophy study at the University of Sydney. [14]

He covered the European Championships in 2000 and 2004 with Fox Sports, On 29 July 2006 he joined the Fox Sports football team as a pundit and commentator for the A-League. Harper also features on the weekly program Kick Off as well as previously hosting Fox Sports FC. [18] He is also a regular contributor as an 'expert' Football commentator in the print and electronic media's coverage of football in Australia. During his commentary of an Adelaide United Asian Champions League game, he coined the phrase 'spawning salmon' after Adelaide United's Travis Dodd flew in the air to head down the ball assisting Fabian Barbiero. [19]

In December 2004 Harper was appointed CEO of A-League team Sydney FC. [20] He became director of football development in July 2005, with the role of CEO replaced by an executive general manager. [21] Harper resigned after the end of the 2005–06 season. [22] 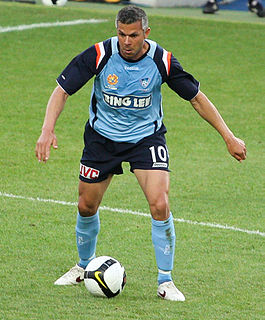 Stephen Christopher Corica is an Australian association football manager and former player. He is the current manager of Sydney FC in the A-League. 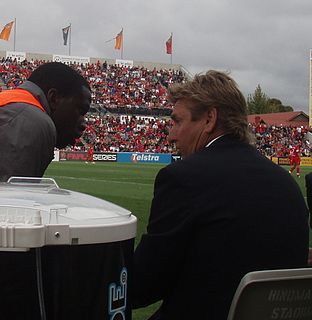 Alexander John Kosmina, known as John Kosmina, is an Australian former football (soccer) player and manager, most recently being the Senior Head Coach of Brisbane Strikers. He is a member of the Football Federation Australia Football Hall of Fame. 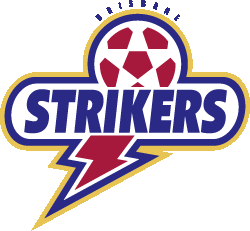 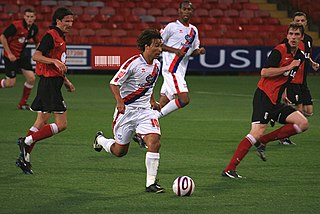 The Joe Marston Medal is an A-League award given to the player of the match in the A-League Grand Final each year. Introduced in 1990, previously the award was also given to the best player in the National Soccer League grand final. The medal is named after Joe Marston, who played for Australia national association football team in the 1950s and was a member of the Preston North End side that played in the 1954 FA Cup Final. 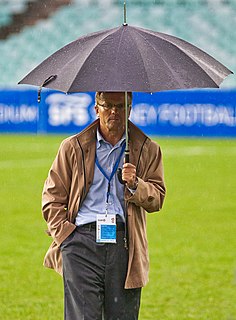 Branko Culina is a football (soccer) coach and former player. He previously managed Sydney FC and the Newcastle Jets in the A-League.

The sport of soccer has had a long history in the Newcastle, New South Wales and the wider Hunter Region. The area has had a number of teams involved in national competitions from 1978 through to the present day, being represented by the Newcastle Jets in the A-League.

The 1995–96 A-League season was the first year of a rebranded Australian National Soccer League (NSL) and the twentieth since the national league began in 1977. The competition was variously known as the A-League and the Ericsson Cup at the time.

Mark Sean Jones is a former Australian football (soccer) player. He last served as manager of the Newcastle Jets.

Adriana Jones is an Australian football (soccer) player, who plays for Melbourne City in the Australian W-League.

The 1996 A-League Grand Final was the first grand final to be held under the A-League name after the short-lived rebranding of the National Soccer League (NSL) began before the 1995–96 season. Melbourne Knights defeated Marconi-Fairfield 2–1 to win their second consecutive grand final.

A marquee player—officially a designated player from the 2019–20 season—is a player whose wage is paid outside the A-League salary cap.