Area code 417 serves the southwestern quadrant of Missouri, including the cities of Branson, Carl Junction, Carthage, Joplin, Lebanon, Neosho, Nixa, Ozark, Springfield, and West Plains. Missouri was originally slated to receive only two area codes. 314 served the eastern part of the state from St. Louis to Jefferson City, while 816 was to serve all points west of Jefferson City, including Kansas City and Springfield. In 1951, 816 was reduced to Kansas City and the northwest, while southwest Missouri was assigned 417.

Even with the presence of Springfield, the state's third-largest city, it is one of the most thinly populated area codes in the nation. Despite the growing proliferation of cell phones and smart phones (particularly in and around Springfield), 417 is nowhere near exhaustion; under current projections, the region will not need another area code until 2031 at the earliest. [1] 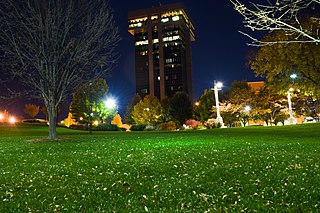 Springfield is the third largest city in the state of Missouri and the county seat of Greene County. As of the 2010 census, the city's population was 159,498. As of 2019, the Census Bureau estimated its population at 167,882. It is the principal city of the Springfield metropolitan area, which has a population of 462,369 and includes the counties of Christian, Dallas, Greene, Polk, and Webster. 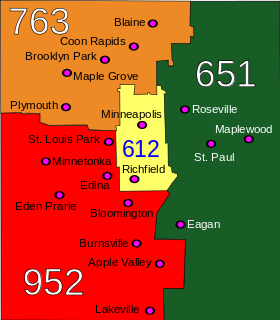 Area code 612 is part of the North American Numbering Plan (NANP) of the public switched telephone network for the city of Minneapolis, Minnesota and a few surrounding areas such as Fort Snelling, St. Anthony and Richfield. By geographical area, it is the smallest area code in the state of Minnesota. However, like many other metropolitan area codes in the United States, the region used to be much larger, accounting for the entire Twin Cities region and a wide area surrounding it. 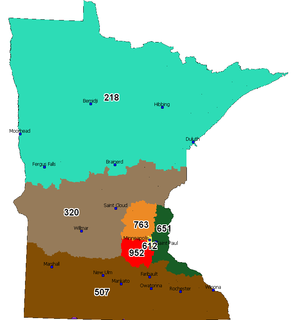 Area code 218 is part of the North American Numbering Plan (NANP) of the public switched telephone network for the northern part of the US state of Minnesota. It is one of Minnesota's original two codes, although its geographical area has been modified since inception. By area, the region is the largest area code in Minnesota, covering roughly the northern half of the state. It includes the cities of Duluth, Hibbing, Brainerd, Bemidji, Fergus Falls, and Moorhead. 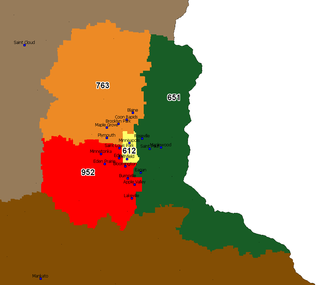 Area code 651 is the telephone numbering plan code for Saint Paul, Minnesota, and the eastern suburbs of the Twin Cities. A dogleg portion also extends to the southeast along the Mississippi River to include cities such as Hastings. The region was the fifth area code created in the state in 1998, when it was carved out of area code 612.

Area code 763 is the telephone numbering plan code for the northwestern suburbs of Minneapolis-St. Paul, Minnesota, including cities such as Plymouth, Maple Grove, and Brooklyn Park. It was created in 2000 along with area code 952 when they were carved out of area code 612, which now only contains the city of Minneapolis and a few inner-ring locales.

Area code 402 is the telephone area code in the North American Numbering Plan (NANP) for eastern Nebraska. It was one of the original area codes created in 1947, at which time it served the entire state.

Area code 308 is the telephone area code in the North American Numbering Plan for western Nebraska. It was created on July 1, 1954, by splitting the numbering plan area (NPA) 402 along a roughly S-shaped boundary line from the western half of the Nebraska–South Dakota border to the approximate center of the Nebraska–Kansas border. A roughly 50-mile segment of the line running northeast to southwest in the eastern third of the state follows the Platte River.

Area code 413 is a telephone area code in the North American Numbering Plan (NANP) for the western third of the U.S. State of Massachusetts. It is the largest numbering plan area in the Commonwealth, and extends from the New York state line eastward into Worcester County, while excluding the Franklin County towns of Orange, New Salem, Warwick, and Wendell, which use the overlay of area codes 978 and 351. The most-populous city of area code 413 is Springfield. 413 also includes Chicopee, Northampton, Holyoke, Greenfield, and Amherst.

North American area code 602 is a state of Arizona telephone area code that covers most of the city of Phoenix.

Area code 901 serves Memphis, Tennessee, and most of its inner-ring suburbs. Geographically speaking, it is the smallest area code in the state. 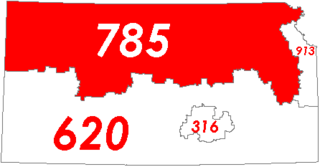 Area code 785 is the area code for telephone exchanges in most of northern Kansas. It was created in a split of the numbering plan area 913 on July 20, 1997, and stretches from the Colorado state line on the west to the Missouri state line on the east, while excluding the Kansas side of the Kansas City metropolitan area, which retained 913. The largest city by population in the numbering plan area is the Kansas state capital, Topeka. 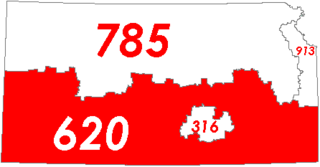 Area Code 620 covers telephone exchanges in most of southern Kansas. It was created as the result of a split from 316 on February 3, 2001. The area code stretches across the southern half of the state, from the Colorado border in the west to the Missouri border in the east. It completely surrounds 316, which now only serves Wichita and its inner suburbs, making it one of the six pairs of "doughnut area codes" in the numbering plan. Permissive dialing of 316 across southern Kansas continued until November 3, 2001.

Area Code 316 is the area code for telephone exchanges in the city of Wichita, Kansas and surrounding communities. The area code formerly covered all of southern Kansas. It is an enclave area code, in that it is completely surrounded by area code 620.

Area code 816 is the area code for Kansas City, St. Joseph, and all or part of 15 surrounding counties in northwestern Missouri. This area code originally covered most of the northern and western two-thirds of the state, including its borders with Arkansas, Illinois, Iowa, Kansas, Nebraska, and Oklahoma, but has been reduced so that it only serves a ribbon bordering Kansas. Within Missouri, 816 borders only area code 660, the latter being a relief code when 816 was nearing exhaustion. 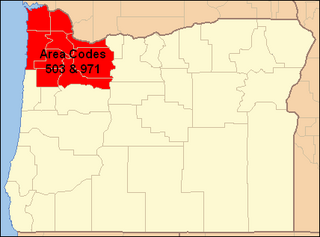 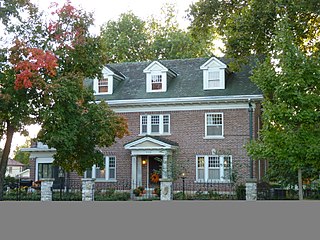 Rountree is a neighborhood in central Springfield, Missouri. The neighborhood's borders are marked by Missouri State University to the west, Glenstone Avenue to the east, Catalpa Street to the south, and Cherry Street to the north. Rountree is predominantly residential, but is home to several popular restaurants, bakeries, and other businesses. The majority of homes in Rountree were constructed during the 1910s and 1920s. Architecture in the neighborhood is diverse, with many examples of Craftsman, Foursquare, and Federalist styles.