Armoured regiments are units provided by the Royal Armoured Corps of the British Army.

The Royal Armoured Corps (RAC) provides the armour capability of the British Army, with vehicles such as the Challenger 2 Tank and the Scimitar Reconnaissance Vehicle. It was created as a loose association of armoured regiments, both the Royal Tank Regiment and those converted from old horse cavalry regiments. Today it comprises fourteen regiments - nine regular and four Yeomanry. 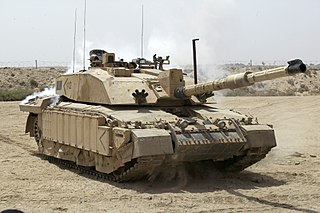 The FV4034 Challenger 2 is a British main battle tank (MBT) in service with the armies of the United Kingdom and Oman. It was designed and built by the British company Vickers Defence Systems.

There are three Armoured Regiments, each equipped with 56 Challenger 2 tanks. 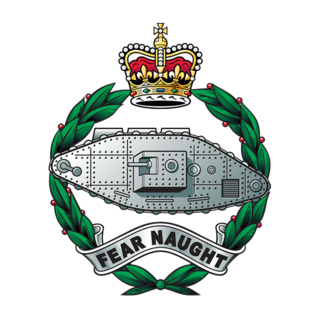 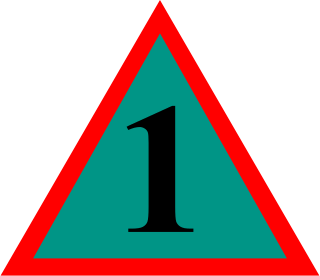 The King's Royal Hussars (KRH) is a cavalry regiment of the British Army. It is part of the Royal Armoured Corps. The regiment was formed in 1992 and is based at Tidworth. It serves as the armoured regiment of the 12th Armoured Infantry Brigade. Under Army 2020 Refine, it will exchange its Challenger 2 tanks for Ajax vehicles.

The organisation of a Type 56 Armoured Regiment is:

The first armoured regiments - known at the time as "tank battalions" - were formed in the First World War, first in the Machine Gun Corps and later as the Tank Corps. Each battalion had three companies, each of three sections of four tanks, for a combat strength of thirty-six tanks; a further twelve were kept in reserve for training and replacement purposes. [2] Twenty-six battalions were formed during the war, quickly reduced to four battalions after the end of hostilities.

The Machine Gun Corps (MGC) was a corps of the British Army, formed in October 1915 in response to the need for more effective use of machine guns on the Western Front in the First World War. The Heavy Branch of the MGC was the first to use tanks in combat and was subsequently turned into the Tank Corps, later called the Royal Tank Regiment. The MGC remained in existence after the war until it was disbanded in 1922.

By late World War Two, there were four armoured regiments in each armoured division. One, the Division's Reconnaissance Regiment, was equipped with the Cromwell tank; the other three, which were in the Armoured Brigade, were equipped with the Sherman medium tank. An exception was the 7th Armoured Division's 22nd Armoured Brigade which had a mixture of Cromwells and Sherman Fireflys (Sherman fitted with 17pdr guns). [3] Each regiment was formed of four squadrons, A, B, C and HQ. The lettered squadrons were made up of four troops of four tanks and a HQ troop. The HQ squadron was made up of command tanks and a reconnaissance troop of light tanks. In north-west Europe, during the battle of Normandy from June to August 1944, anti-aircraft tanks were part of the HQ squadron.

The Cromwell tank, officially Tank, Cruiser, Mk VIII, Cromwell (A27M), was one of the series of cruiser tanks fielded by Britain in the Second World War. Named after the English Civil War leader Oliver Cromwell, the Cromwell was the first tank put into service by the British to combine high speed from a powerful and reliable engine, and reasonable armour. The intended dual-purpose high velocity gun could not be fitted in the turret and the medium velocity dual purpose gun fitted proved inadequate. An improved version with a high velocity gun became the Comet tank. 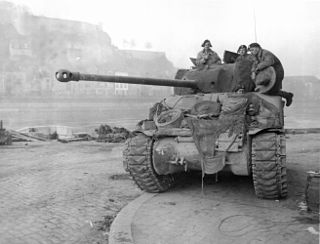 The Sherman Firefly was a tank used by the United Kingdom and some Commonwealth and Allied armoured formations in the Second World War. It was based on the US M4 Sherman, but fitted with the powerful 3-inch (76.2 mm) calibre British 17-pounder anti-tank gun as its main weapon. Originally conceived as a stopgap until future British tank designs came into service, the Sherman Firefly became the most common vehicle mounting the 17-pounder in the war.

The 1998 Strategic Defence Review cut the number of armoured regiments to six, converting one of the existing regiments to the formation reconnaissance role and using the other to form the Joint Chemical, Biological, Radiation and Nuclear Regiment. As a part of this change, the six remaining regiments were expanded from a three-squadron structure with 38 tanks to a four-squadron one with 58. [4] This structure is also known as the "Type 58" regiment. Under the 2003 Defence White Paper, this was reduced to five armoured regiments - the sixth converting to the formation reconnaissance role - with three armoured squadrons to be converted to "light armoured" squadrons, which would eventually be equipped with the Future Rapid Effect System. [5]

The Strategic Defence Review (SDR) was a British policy document produced in July 1998 by the Labour Government that had gained power a year previously. Then Secretary of State for Defence, George Robertson, set out the initial defence policy of the new government, with a series of key decisions designed to enhance the United Kingdom's armed forces.

The Future Rapid Effect System (FRES) was the name for the overarching British Ministry of Defence (MOD) programme to deliver a fleet of more than 4,000 armoured fighting vehicles for the British Army. The vehicles were to be rapidly deployable, network-enabled, capable of operating across the spectrum of operations, and protected against current threats. The programme has now been split into two separate procurement projects for a reconnaissance Specialist Vehicle (SV) and an aspiration for a future Utility Vehicle (UV). The ASCOD SV vehicle has been selected to fulfill the SV requirement.

Following the 2003 defence review Delivering Security in a Changing World , five regular army regiments were equipped for the heavy armoured role: Of the five regiments, two were assigned to the 1st (UK) Armoured Division (The Queen's Royal Hussars and The Royal Scots Dragoon Guards) and three to the 3rd (UK) Mechanised Division (The Royal Dragoon Guards, 2nd Royal Tank Regiment and The King's Royal Hussars).

Two regiments of the Territorial Army, the Royal Wessex Yeomanry and the Royal Mercian and Lancastrian Yeomanry, provided replacement crews for the regular regiments. The 1st Royal Tank Regiment also operated a small number of Challenger 2 tanks for training and demonstration. 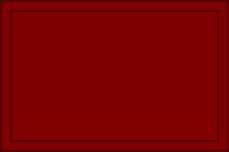 The 5th Canadian Division is a formation of the Canadian Army responsible for the command and mobilization of all army units in the provinces of New Brunswick, Nova Scotia, Prince Edward Island and Newfoundland and Labrador. It was first created as a formation of the Canadian Expeditionary Force during the First World War. It was stood down during the war only to be reactivated through the renaming from '1st Canadian Armoured Division' to the 5th Canadian (Armoured) Division during the Second World War. In both wars the division was recognized by the distinctive Maroon patch worn on the sleeve of its soldiers. 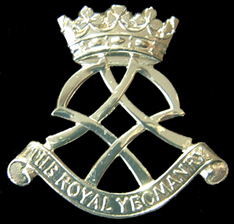 The Royal Yeomanry (RY) is the senior reserve light cavalry regiment of the British Army. Equipped with Supacat Jackal variants and the Land Rover RWMIK, the Royal Yeomanry's military role is to conduct mounted and dismounted formation reconnaissance. The Regimental Headquarters is located at Fulham in London, with squadrons in London and the Midlands at Fulham, Nottingham, Dudley, Croydon, Windsor, Telford and Leicester.

The Combat Vehicle Reconnaissance (Tracked) —or CVR(T)—is a family of armoured fighting vehicles (AFV)s in service with the British Army and others throughout the world. They are small, highly mobile, air-transportable armoured vehicles designed to replace the Alvis Saladin armoured car. 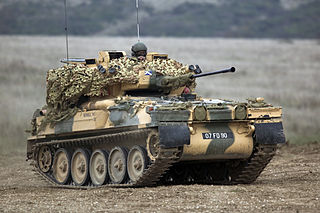 The FV107 Scimitar is an armoured reconnaissance vehicle used by the British Army. It was manufactured by Alvis in Coventry. It is very similar to the FV101 Scorpion, but mounts a high velocity 30 mm L21 RARDEN cannon instead of a 76 mm gun. It was issued to Royal Armoured Corps armoured regiments in the reconnaissance role. Each regiment originally had a close reconnaissance squadron of five troops, each containing eight FV107 Scimitars. 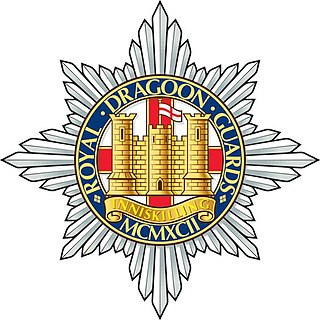 The Royal Dragoon Guards (RDG) is a cavalry regiment of the British Army. It was formed in 1992 by the amalgamation of two other regiments: The 4th/7th Royal Dragoon Guards and the 5th Royal Inniskilling Dragoon Guards. The regiment currently serves as the Armoured Cavalry Reconnaissance unit of the 20th Armoured Infantry Brigade and is therefore equipped with the Combat Vehicle Reconnaissance (Tracked) Scimitar and is based in Catterick Garrison, North Yorkshire. Today the RDG is an operationally experienced regiment having recently served in Iraq, and Afghanistan. 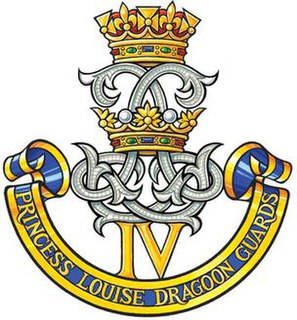 The 4th Princess Louise Dragoon Guards is an inactive armoured regiment of the Canadian militia. 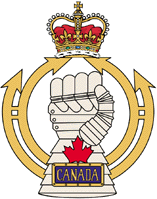 The Royal Canadian Armoured Corps is the armoured corps within the Canadian Army, including regular and reserve force regiments.

The Westminster Dragoons (WDs) is central London’s only Army Reserve cavalry subunit. One of the Royal Yeomanry's six squadrons, the squadron's current role is light cavalry: to provide a rapidly deployable force with fast mobility and substantial firepower in support of operations. Formed in the aftermath of Second Boer War as part of the County of London Yeomanry, the WDs fought in the Battle of Gallipoli and led British forces onto the beaches during the Normandy Invasion in 1944. The squadron most recently saw action on Operation Telic, when it was mobilised for the 2003 war in Iraq and again in 2006 for peace support operations there. Soldiers and officers of the squadron have also deployed as individual replacements on Operation Herrick in Afghanistan.

The Danish Division, short DDIV, is the only remaining military land division in Denmark. It is also the most potent single formation of the Danish armed forces. It was created on 1 January 1997 as the successor of Jutland Division. It is one of the now-two Divisions of Multinational Corps North East, the German-Danish-Polish Corps, the successor to the former German-Danish Allied Land Forces Schleswig-Holstein and Jutland (LANDJUT), a NATO Allied Forces Northern Europe formation. 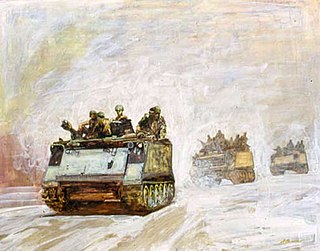 Armoured cavalry began to replace horse cavalry as the reconnaissance arm in most armies after the First World War, although many armies continued to maintain horse cavalry through the end of the Second World War.

There are 13 Cavalry Regiments of the British Army each with its own unique cap badge, regimental traditions, and history. Of the currently 9 regular cavalry regiments; 2 serve as armoured regiments, 3 as armoured cavalry regiments, 3 as light cavalry and 1 as a mounted ceremonial regiment. There are also four yeomanry regiments of the Army Reserve, of these, 3 serve as light cavalry and 1 as an armoured regiment. Each yeomanry light cavalry unit has been paired with a regular unit of the same role, the armoured yeomanry unit is paired with the 2 regular armoured units. All except the Household Cavalry are part of the British Army's Royal Armoured Corps.

The Northumberland Hussars is a British Territorial Army Squadron equipped with FV107 Scimitar and FV103 Spartan armoured reconnaissance vehicles. The squadron is part of The Queen's Own Yeomanry (QOY), a Formation Reconnaissance Regiment. The 'Hussars' are based in Newcastle upon Tyne. 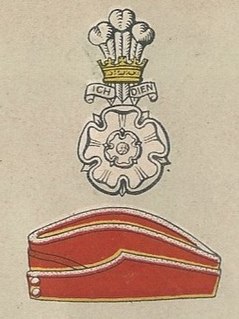 The Yorkshire Hussars was a unit of the British Army formed in 1794. The regiment was formed as volunteer cavalry in 1794 during the French Revolutionary Wars. It was converted to an armoured role during the Second World War. In 1956, it merged with two other Yorkshire yeomanry regiments to form the Queen's Own Yorkshire Yeomanry. Its lineage is continued today by the Queen's Own Yeomanry. 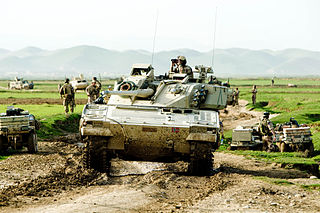 This article supplements the 7th Armoured Division article by providing order of battle information for the division through various periods of the Second World War as the organization of an armoured division was changed by the War Office. Due to the experience gained in the Middle East these changes were sometimes present in the armoured divisions there before the War Office mandated organization. Parallel changes were made in the organization in the armoured brigades. The Division frequently did not match any organization scheme due to the lack of units in the Middle East.

The field forces of the British Army after the Army 2020 Refine reforms are organised, in garrison, as: