Barry Geraghty (born 16 September 1979) is a retired Irish jockey. He is the second most successful jockey of all time at the Cheltenham Festival. [2]

He won the Grand National in 2003 on Monty's Pass. [4] Also that year he won five races at the Cheltenham Festival, including the Queen Mother Champion Chase on Moscow Flyer and was voted Irish sports personality of the year.

In the 2003-04 season he became Champion Irish jump jockey for the second time and won the Stayers Hurdle at Cheltenham on the Jonjo O'Neill-trained Iris's Gift.

Geraghty and Moscow Flyer won their second Champion Chases at the 2005 Cheltenham Festival, and Barry also won the Cheltenham Gold Cup on Kicking King for trainer Tom Taaffe at that meeting. Following the retirement of Mick Fitzgerald he became first jockey to the Nicky Henderson stable in 2008.

In 2009 he won the Champion Hurdle on Punjabi, [5] the Arkle Challenge Trophy on Forpadydeplasterer and Triumph Hurdle on Zaynar. In winning the Champion Hurdle he became the first jockey to have won the big four races at cheltenham (Champion Hurdle, Champion Chase, Stayers Hurdle, Gold Cup) and The English Grand National. On 2 November 2009 he rode his 1000th winner under National Hunt Rules in UK and Ireland when the Nicky Henderson trained Duc De Regniere won at Kempton. [6] He won his fifth Champion Chase at the 2013 Cheltenham Festival on Sprinter Sacre. He has had at least one winner at each Cheltenham festival since his first victory in 2002 except for the 2017 Cheltenham festival. At the 2020 Cheltenham Festival he had five wins for owner JP McManus. This included a record equalling fourth in the Champion Hurdle.

In July 2020, Geraghty announced his retirement. [9] At retirement, he was the fourth most successful British and Irish jump jockey with 1920 winners. [10]

Geraghty rode in every Grand National from 2000 until 2014, winning once and being placed on four other occasions. He missed the 2015 Grand National due to a hairline fracture in his left tibia. [11]

Philip Hobbs is a British racehorse trainer specializing mainly in National Hunt racing. He is based at stables near Minehead, Somerset.

The Ryanair Novice Chase is a Grade 1 National Hunt Steeplechase in Ireland which is open to horses aged five years or older. It is run at Punchestown over a distance of about 2 miles, and during its running there are eleven fences to be jumped. The race is for novice chasers, and it is scheduled to take place each year during the Punchestown Festival in late April or early May.

Sprinter Sacre, is a French-bred, British-trained Selle Français racehorse. He currently has the third highest ever Timeform steeplechase rating of 192p, behind only Arkle on 212 and Flyingbolt on 210 as their highest in the modern era. 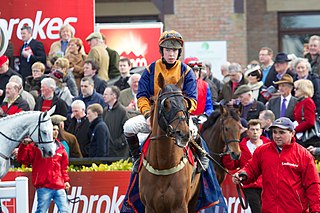 Andrew Lynch is a retired Irish National Hunt jockey. Lynch had his first ride in a bumper at Fairyhouse in April 2001 and his first winning ride in May 2002 on Tristernagh in a novice hurdle at Downpatrick. Lynch won 2 races in the Cheltenham Festival in 2010 and 2011. His 2 Cheltenham Festival wins in 2010 were on Sizing Europe and Berties Dream in the Arkle Challenge Trophy and Albert Bartlett Novices' Hurdle and respectively while his 2011 wins were on Sizing Europe and Sizing Australia in the Queen Mother Champion Chase and Cross Country Chase respectively. In May 2012 Lynch broke his leg after a fall at Cork.

Simonsig was a British Thoroughbred racehorse. He won eight of his 13 races and was best known for winning the Neptune Investment Management Novices' Hurdle at the 2012 Cheltenham Festival and the Arkle Challenge Trophy at the 2013 Festival. He was owned by Ronnie Bartlett and trained by Nicky Henderson. 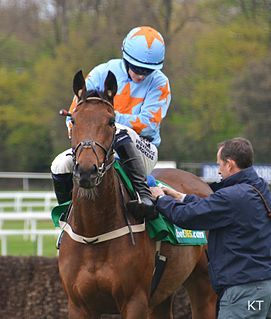 Paul Townend is an Irish jockey who competes in National Hunt racing. Townend comes from Midleton in County Cork and rides primarily for the stable of Irish trainer Willie Mullins. Townend has worked for Mullins since beginning his career as an apprentice flat racing jockey. He was Irish jump racing Champion Jockey for the 2010–11 season, the 2018–19 season and 2019-20 season.