Blott on the Landscape

Blott on the Landscape is a novel by Tom Sharpe which was first published in 1975. The book was adapted into a 6-part television series of the same name for BBC television in 1985.

The story revolves around the proposed construction of a motorway —M101 in the book and the M399 in the BBC series—through Cleene Gorge in rural South Worfordshire—a fictional gorge in a fictional English county.

At one end of Cleene Gorge is Handyman Hall; the home of the politician Sir Giles Lynchwood and his wife Lady Maud Lynchwood.

Sir Giles is secretly in favour of ensuring that the motorway passes through the Cleene Gorge (and is actually the originator of the plan) as it will mean he will be paid the compensation for the destruction of Handyman Hall, which is under a covenant preventing its sale. While superficially pretending to be supportive he takes steps to undermine the inquiry and prevent alternatives being adopted, to ensure the new road travels through the Gorge. [1] By contrast, Lady Maud's family has lived in the gorge for over 500 years, and she is fiercely defensive of her heritage and expects Giles to support her.

Matters are further complicated by their on-going marital problems, including Sir Giles's fetishist infidelity and Lady Maud's wish for children to continue her line (to which Sir Giles is violently opposed); and the actions of Maud's gardener, Blott, a former German prisoner of war who is believed to be Italian. The German Army had become so fed up with Blott that the Nazi High Command decided to get rid of him by assigning him to an Italian bomber on a raid to England. Blott, who had served as navigator—and was not very good at it—made them completely lost and was the only survivor when his plane crashed into a mountain, whereupon he was captured, with his captors believing him to be Italian. Blott is strongly patriotic towards his new home nation and home and fiercely devoted to the Handyman family, Maud in particular. Maud's and Giles's marriage settlement leaves Giles with Handyman Hall in the event of a no-fault divorce but not in the event of death or infidelity, a situation he also seeks to provoke by refusing to co-operate in his marital duties and which Maud sees as a potential solution.

With his military training, and some leftovers of the war secretly buried on the estate, Blott begins a covert campaign including blackmail and wire tapping to scrutinize Sir Giles's activities on Maud's behalf and to undermine the construction of the motorway. He also discovers and aims to foil Giles's plans. In the course of the fight for the Gorge, a picturesque nearby village is destroyed by Blott using a demolition crane to whip up popular opposition to the works. Giles is discovered by Lady Maud and Blott in bed bound by his mistress Mrs Forthby and is blackmailed, as is Dundridge, the official in charge of the motorway construction, and the Hall is quickly converted into a wildlife park in an attempt to prevent the removal of its occupants. Giles himself is finally killed by lions when he is discovered by Blott and Maud trying to burn down the Hall.

As a final resort, Blott concretes himself into his home, located in the entrance archway to the estate, preventing work progress. Dundridge, frustrated and going rapidly mad with power, demands the SAS are called in to remove Blott. Blott, after repelling their attempts to scale the arch, secretly launches an attack on his own archway for which the SAS is blamed, finally compelling enough public attention to cause the plans to be dropped. Dundridge is imprisoned for his part in the 'attack' and the destruction of the village (in which one person had been accidentally killed), and Maud and Blott (who have fallen in love by this time) marry and state their intention to add to the Handyman family.

Clementine Ogilvy Spencer-Churchill, Baroness Spencer-Churchill, was the wife of Winston Churchill, Prime Minister of the United Kingdom, and a life peer in her own right. While legally the daughter of Sir Henry Hozier, her mother’s known infidelity and his suspected infertility made her paternal parentage uncertain. She met Winston Churchill in 1904 and they began their marriage of 56 years in 1908. They had five children together, one of whom died at the age of two. During World War I, Clementine organised canteens for the munitions workers and during World War II, she acted as Chairperson of the Red Cross Aid to Russia Fund, President of the Young Women’s Christian Association War Time Appeal and Chairman of Maternity Hospital for the Wives of Officers, Fulmer Chase. Throughout her life she granted many titles, the final being a life peerage following the death of her husband in 1965. In her later years, she sold several of her husband’s portraits to help support herself financially. She died in her London home at the age of 92. 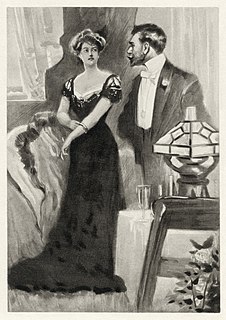 An Ideal Husband is an 1895 stage play by Oscar Wilde that revolves around blackmail and political corruption, and touches on the themes of public and private honour. The action is set in London, in "the present", and takes place over the course of twenty-four hours. 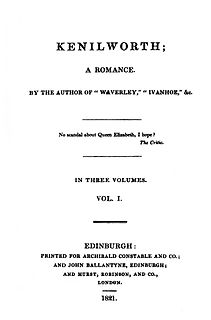 Kenilworth. A Romance is a historical romance novel by Sir Walter Scott, one of the Waverley novels, first published on 13 January 1821. Set in 1575 it leads up to the elaborate reception of Queen Elizabeth at Kenilworth Castle by the Earl of Leicester who is complicit in the murder of his wife Amy Robsart at Cumnor. 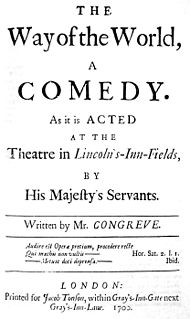 The Way of the World is a play written by the English playwright William Congreve. It premiered in early March 1700 in the theatre in Lincoln's Inn Fields in London. It is widely regarded as one of the best Restoration comedies and is still occasionally performed. Initially, however, the play struck many audience members as continuing the immorality of the previous decades, and was not well received. 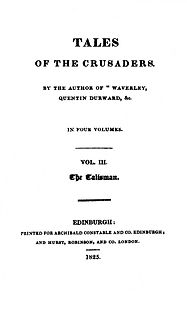 The Talisman is one of the Waverley novels by Sir Walter Scott. Published in 1825 as the second of his Tales of the Crusaders, the first being The Betrothed, it is set during the Third Crusade and centres on the relationship between Richard I of England and Saladin.

The Code of the Woosters is a novel by P. G. Wodehouse, first published on 7 October 1938, in the United Kingdom by Herbert Jenkins, London, and in the United States by Doubleday, Doran, New York. It was serialised in The Saturday Evening Post (US) from 16 July to 3 September 1938 and in the London Daily Mail from 14 September to 6 October 1938.

A Damsel in Distress is a novel by P. G. Wodehouse, first published in the United States on 4 October 1919 by George H. Doran, New York, and in the United Kingdom by Herbert Jenkins, London, on 15 October 1919. It had previously been serialised in The Saturday Evening Post, between May and June of that year. 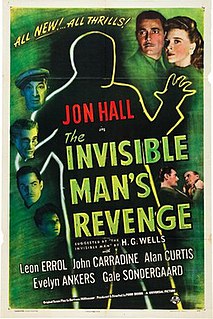 The Invisible Man's Revenge is a 1944 American horror film directed by Ford Beebe and written by Bertram Millhauser. The film stars John Carradine as a scientist who tests his experiment on Jon Hall,, a convict who takes the invisibility serum and then goes on a crime spree. The film was announced on June 10, 1943, and began shooting on January 10, 1944 finishing in mid-February. On its release, reviews in The New York Herald-Tribune, The New York Daily News and The New York World-Telegram noted that the film series and its special effects became tired, while a review in The Hollywood Reporter declared it as one of the best in the series.

Help! I'm a Teenage Outlaw is a British television programme filmed in the Czech Republic and first aired on CITV. The show follows three hapless outlaws during the English Civil War, who are trying to bring justice back to the land.

Bella at Midnight is a fantasy novel for children by Diane Stanley. The story is based on the fairy tale Cinderella. It was first published in 2006. 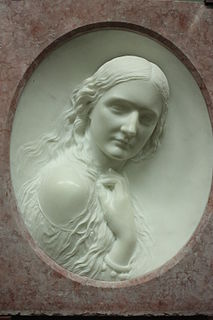 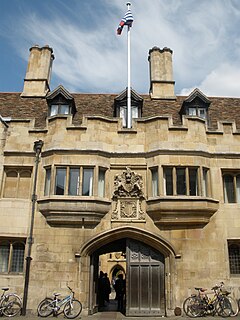 Florence, Lady Baker or Florica Maria Sas; Barbara Szász; Maria Freiin von Sass; Barbara Szasz; Barbara Maria Szász; Barbara Maria Szasz was a Hungarian-born British explorer. Born in Transylvania, she became an orphan when her parents and brother were murdered by the Romanian marauders led by Ioan Axente Sever and Simion Prodan who killed approximately 1000 predominantly Hungarian civilians in Nagyenyed on 8-9 January, 1849. She fled with the remains of the Hungarian army to the Ottoman Empire, to Vidin. Here she disappeared as child only to be seen in 1859 by Samuel Baker who rescued her. While Baker was visiting the Duke of Atholl on his shooting estate in Scotland, he befriended Maharaja Duleep Singh and in 1858–1859, the two partnered an extensive hunting trip in central Europe and the Balkans, via Frankfurt, Berlin, Vienna and Budapest. On the last part of the voyage, Baker and the Maharajah hired a wooden boat in Budapest, which was eventually abandoned on the frozen Danube. The two continued into Vidin where, to amuse the Maharajah, Baker went to the Vidin slave market. There, Baker fell in love with a white slave girl, Florence, destined for the Ottoman Pasha of Vidin. He was outbid by the Pasha but bribed the girl's attendants and they ran away in a carriage together and eventually she became his lover and wife and accompanied him everywhere he journeyed. They are reported to have married, most probably in Bucharest, before going to Dubrushka, but Sir Samuel certainly promised that they would go through another ceremony on their return to England – where they had a family wedding in 1865.

Blott on the Landscape is a 1985 BBC TV series, adapted by Malcolm Bradbury from the 1975 Tom Sharpe novel of the same name. It was broadcast on BBC2 in six episodes of 50 minutes each between 6 February and 13 March 1985.

Maud West was an English detective.

The Haunted Tower is an opera composed by Stephen Storace to a libretto by James Cobb. It was first performed in London at the Theatre Royal, Drury Lane on 24 November 1789. It was one of Storace's more popular works, remaining among Drury Lane's repertoire for 30 years. The printed vocal score went through five editions, attesting to its popularity.