Carnival in Coal is an extreme metal/avant-garde metal band from France. Founded in 1995, the band mixed death metal, black metal and other extreme metal genres with genres such as easy listening, disco, and pop.[ citation needed ]

Originally, Carnival In Coal signed to and released their debut album through the now-defunct French indie label War On Majors Records. The band then released two albums through another French based independent Metal label, Season of Mist, and later signed a multi-album deal to Earache Records and their Elitist Records sub-label. The only album to come from this deal was 2005's Collection Prestige.

The band played its first live show in April 2006 at the Killer Fest in Chaulnes, France, and then went on to play several dates across Europe, including festivals like Hellfest Summer Open Air in France and Brutal Assault in Czech Republic.

Sigh is a Japanese extreme metal band from Tokyo, formed in 1989. They are credited as being one of the first Japanese black metal bands, producing music in the early 1990s when the majority of black metal came from Scandinavia. They gradually shifted from a traditional extreme metal sound to a more experimental, avant-garde style employing symphonic elements.

Cruachan is a folk metal band from Dublin, Ireland that has been active since the 1990s. They have been acclaimed as having "gone the greatest lengths of anyone in their attempts to expand" the genre of folk metal. They are recognised as one of the founders of the genre of folk metal. With a specific focus on Celtic music and the use of Celtic mythology in their lyrics, Cruachan's style of folk metal is known as Celtic metal. The band named themselves after the archaeological site of Rathcroghan in Ireland also known as Cruachan.

Conception is a power/progressive metal band from Raufoss, Norway, originally active from 1989 to 1998, during which they released four studio albums. The band reunited in 2018, twenty years after originally disbanding with a new single and EP.

Kiuas were a heavy metal band from Espoo, Finland. Their music included influences from power metal, folk metal and different styles of extreme metal. Influences from progressive metal can also be heard in some songs.

Suidakra is a melodic death metal band from Germany. During their twenty-year career, they have performed over 200 live shows for several European and Russian tours, as well as a North American tour. They are known for their use of traditional instruments to augment their sound, such as the bagpipe, banjo, and tin whistle.

Morgul is a Norwegian symphonic black metal band formed in Råde, Norway in the year 1991.

Ragnarok is a Norwegian black metal band. The band was formed in Sarpsborg, Norway in 1994 by Jerv and Jontho, after they left Thoth, their previous band. Lyrical themes include Norse Mythology, Vikings, Satanism, War, and Anti-Christianity. The band's name comes from the Old Norse word Ragnarök, the prophesied last battle between the Norse gods and the giants. They are "one of the most extreme black metal bands in Norway", making heavy use of make-up and special effects.

Dreamtale is a Finnish symphonic power metal band from Tampere, formed in 1999.

Dolorian is a doom metal band from Oulu, Finland. Their early recordings are viewed as some of the earliest examples of blackened doom metal. Later recordings mixed dark ambient music with the traditional doom metal style. 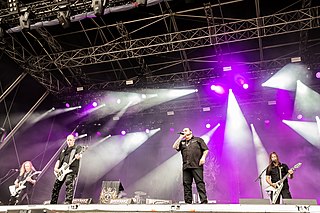 Hortus Animae is a progressive black metal band from Northern and Central Italy. They formed in 1997 in the town of Rimini (Romagna). After the release of their self-produced debut The Melting Idols, they began an active live streak with bands like Lacuna Coil, Ancient and Napalm Death. Upon opening for the cult Norwegian black metal band Ancient in Padova (Italy), the band developed a friendship with their drummer Grom, who soon after joined the band out of admiration for their work and made it his primary side-project. At this point the band began the recording process of their 2nd album and 1st official release Waltzing Mephisto which had been years in the writing. The album was recorded at the well known Italian metal studios Fear. Following the recording, the band signed deal with Greek label Black Lotus Records in October 2002 and subsequently with Sleaszy Rider Records (EMI) for their 3rd and most evolved concept-album The Blow Of Furious Winds in May 2005.

Aurthohin is a Bangladeshi rock band formed in Dhaka in 1998 by Saidus Sumon, Tonmoy Rahman, Ponir and Rumi Rahman. They are considered to be one of the pioneering band in Bangladeshi alternative rock music. They have released 7 studio albums and also have appeared in some mixed albums. Though they were formed as a rock band they have experimented with genres like progressive metal and groove metal. Sumon's interests in slap bass also led the band's sound into funk-rock. 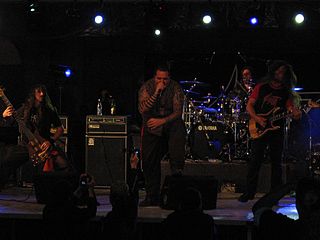 Vesperian Sorrow is a symphonic black metal band from Austin, Texas founded in 1994. They were known as Unholy Descent until they changed their name to Vesperian Sorrow in early 1999. Their lyrics tend to be less extreme than most black metal bands that cover themes of Satanism and Anti-Christianity. They cover instead the cosmos, sorrow, sadness and darkness. Their name, Vesperian Sorrow, directly references this and translates to "sadness or sorrow in the evening hours."

Wuthering Heights is a Danish heavy metal band, with a somewhat eclectic musical style which falls in somewhere between progressive, folk, and power metal. The band is considered a Danish entity although a number of Swedish musicians are associated with it.

Darkestrah is a Kyrgyz pagan metal band, formed in 1999 in Bishkek, Kyrgyzstan. Throughout their career the band has blended folklore music with metal elements. In its lyrics and in musical composition, the band uses national folk musical instruments, such as the komuz and kyl-kyak, and references shamanism and Tengrism. The band also takes influence from genres such as progressive rock and post-rock, generally constructing lengthy, rhythmically complex songs that often feature several discrete movements.