Zimmerman played for Madison High School, scoring 50 goals and notching 25 assists. In four years at Madison, she earned several accolades and honours. She was included in the First Team All-County in 2010 and All-Conference (2010–11). She was also named First Team All-State (2010–11), Morris County Player of the Year (2011) and Star Ledger Player of the Year (2011). Zimmerman then went to Providence College. Her freshman year was a little slow as she only played 10 matches for the Friars. Nevertheless, she managed to score 7 goals and notched on assist, leading the team in points (15). In the following 3 years, Zimmerman became a key player for Providence, leading the team in points and goals in each of the years. Because of her performance, Zimmerman was named for the BIG EAST All-Tournament team, All-BIG EAST First Team honors and was also chosen the 2015 BIG EAST All-Tournament Most Outstanding Offensive Player. [2] [3]

After an outstanding career at college, Zimmerman declared herself for the 2016 NWSL College Draft, but she was not picked by any team. However, her college coach, had a good relationship with Western New York Flash's coach Paul Riley and he managed to get her an invitation to the Flash's preseason camp in Rochester, New York. She began training with Flash, but continued her college education. Zimmerman was included in the Western New York Flash's official roster for the 2016 season, but after not getting to play any minute for the Rochester team, she made the decision to put her career on hold and pursue a graduation.

Back to home at New Jersey, Zimmerman used her contacts to earn a place in the Sky Blue Reserves. On July 1, 2016 with several attacking players cut from the squad for injury problems, the team made the decision to waive GK Erin Nayler to make room and officially signed with Zimmerman. On July 2, she debuted for the SBFC. Zimmerman started and played 73 minutes of the match against the Portland Thorns. She, then, started four of the five matches she played for SBFC until July 31, when Zimmerman suffered an injury after colliding with Estelle Johnson in the 25th minute of the match against Washington Spirit. [3] [4] [5] [6] [7] [8]

In October 2020, Zimmerman signed with W-League side Melbourne Victory. [14]

Oakleigh Cannons Football Club is a soccer club based in the south-east Melbourne suburb of Oakleigh, Victoria, Australia. The club, established by members of Oakleigh's Greek Australian community, currently competes in the NPL Victoria. The club's home ground is at Jack Edwards Reserve, on Edward Street, Oakleigh. 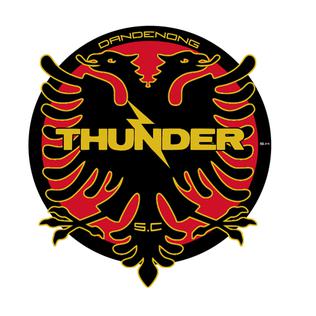 Dandenong Thunder SC is a soccer club from Dandenong, a suburb in the South-East region of Melbourne, Victoria, Australia. They are an Albanian Australian-backed club. Thunder compete in the National Premier Leagues Victoria. 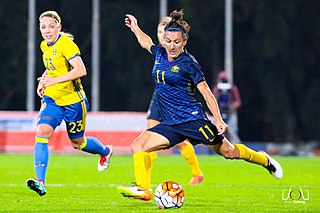 Hume City Football Club is a semi-professional Australian football club based in Broadmeadows, a suburb of Melbourne, Victoria. Established by the local Turkish Australian community, the club competes in the National Premier Leagues Victoria. 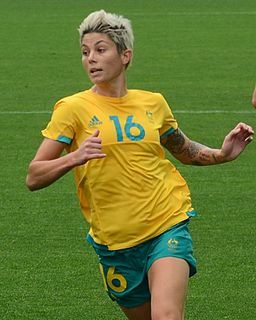 Michelle Pearl Heyman is an Australian soccer player and commentator who currently plays for Canberra United in the W-League in Australia. She became the all-time record goalscorer in the W-League in March 2021, after scoring her 73rd goal. She has previously played for W-League teams Central Coast Mariners, Sydney FC, and Adelaide United as well as the Western New York Flash in the American National Women's Soccer League. Heyman has represented Australia since 2010, playing at the 2014 AFC Women's Asian Cup, the 2015 FIFA Women's World Cup and the 2016 Summer Olympics. In May 2019 she retired from international football.

Ballarat City FC is an Australian semi-professional association football club based in Ballarat, Victoria. For most of its history, the club's home ground was Trekardo Park, before making the move to the Ballarat Regional Soccer Facility in 2014. 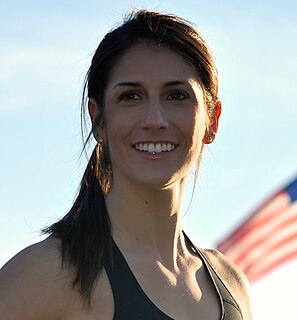 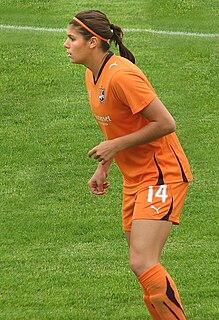 Brittany Nicole Kolmel is an American soccer defender. She was traded in 2018 to the Utah Royals FC of the National Women's Soccer League (NWSL), however she decided to take time off from her professional career. She previously played for FC Kansas City and Western New York Flash in the NWSL, for Sky Blue FC in the WPS, and for the United States U-20 women's national soccer team.

Christopher Cristaldo Zambrini is a Paraguayan-born Australian footballer who currently plays as a forward for Moreland City.

The 2013 Sky Blue FC season was the team's fourth season of existence. Sky Blue played the 2013 season in National Women's Soccer League, the top tier of women's soccer in the United States.

Angela Marguerite Salem is an American former professional soccer midfielder who last played for the Portland Thorns of the National Women's Soccer League (NWSL). In 2016–17, she played for the Boston Breakers. She previously played for the Washington Spirit in the NWSL, the Newcastle Jets in the Australian W-League, the Atlanta Beat and Sky Blue FC in the Women's Professional Soccer (WPS) league, Western New York Flash in the NWSL, and the Finnish club Åland United of the Naisten Liiga.

Taylor Marie Lytle is an American professional soccer player who last played as a midfielder for Utah Royals FC of the National Women's Soccer League (NWSL).

Goulburn Valley Suns are a semi-professional association football club based in Shepparton, Victoria. The club was established in 2013 and currently competes in the National Premier Leagues Victoria 2. The Suns' home ground is John McEwen Reserve.

Adriana Jones is an Australian football (soccer) player, who plays for Melbourne City in the Australian W-League. 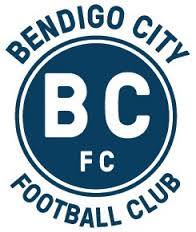 The 2015 Chicago Red Stars season is the seventh season of the soccer club and its third season in National Women's Soccer League. For the first time in NWSL the Red Stars advanced to the playoffs by finishing second in regular season. In addition, the team held the first place for ten consecutive weeks, from week 4 to week 13. However, the club could not reach the NWSL championship, as in the playoffs semi-final the Red Stars lost to the reigning Champion FC Kansas City, by a score of 0–3. It was the club's final season playing home games at the Village of Lisle-Benedictine University Sports Complex.

The 2016 season was the Portland Thorns FC's fourth season of existence in the National Women's Soccer League (NWSL), the top division of women's soccer in the United States. The Thorns finished first, winning the NWSL Shield, an improvement over their sixth-place finish in the 2015 season. They lost their opening game of the 2016 NWSL Championship tournament (playoffs).

Madison Tiernan is an American former professional soccer player who last played as a midfielder for Sky Blue FC of the National Women's Soccer League.