Chief Cashier of the Bank of England

The post is currently held by Sarah John who was appointed in June 2018. She is the 33rd Chief Cashier since the Bank was founded in 1694.

The position has the following responsibilities:

The Executive Director Banking & Chief Cashier is a member of the Governor’s Executive Team which is the Bank’s senior management group. [1]

In 1694 the Bank of England was established. Almost immediately, the Bank started to issue notes in return for deposits. The crucial feature that made Bank of England notes a means of exchange was the promise to pay the bearer the sum of the note on demand. This meant that the note could be redeemed at the Bank for gold or coinage by anyone presenting it for payment. If it was not redeemed in full, it was endorsed with the amount withdrawn. These notes were initially handwritten on Bank paper and signed by one of the Bank’s cashiers.[ citation needed ]

During the 18th century there was a gradual move towards fixed denomination notes. In 1725 the Bank started issuing partly printed notes for completion in manuscript. The £ sign and the first digit were printed but the cashier’s signature along with the name of the payee and other numerals were added by hand.[ citation needed ]

The first fully printed notes appeared in 1855 relieving the cashiers of the task of filling in the name of the payee and signing each note individually. The practice of writing the name of the Chief Cashier as the payee on notes was halted in favour of the anonymous "I promise to pay the bearer on demand the sum of …", a feature that has remained unchanged on notes to this day. The printed signature on the note continued to be that of one of three cashiers until 1870; since then it has always been that of the Chief Cashier. [2] The Bank of England notes on its website that the promise holds "for all time", even after notes have been withdrawn from circulation. This means that every Bank of England note can be exchanged for its face value at any time. [3]

Chief Cashiers of the Bank of England

Listed below are the names of people who have held the post of Chief Cashier at the Bank of England: [4] 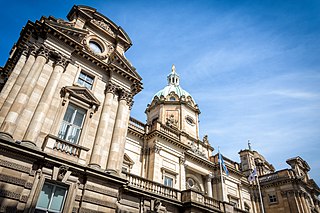 A cheque, or check, is a document that orders a bank to pay a specific amount of money from a person's account to the person in whose name the cheque has been issued. The person writing the cheque, known as the drawer, has a transaction banking account where the money is held. The drawer writes various details including the monetary amount, date, and a payee on the cheque, and signs it, ordering their bank, known as the drawee, to pay the amount of money stated to the payee. 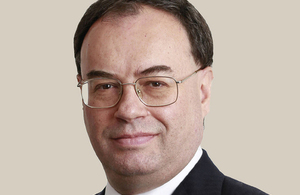 The Bank of England Museum, located within the Bank of England in the City of London, is home to a collection of diverse items relating to the history of the Bank and the UK economy from the Bank’s foundation in 1694 to the present day. 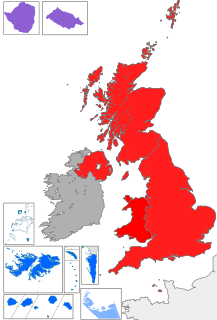 The Bank of England, which is now the central bank of the United Kingdom, British Crown Dependencies and British Overseas Territories, has issued banknotes since 1694. In 1921 the Bank of England gained a legal monopoly on the issue of banknotes in England and Wales, a process that started with the Bank Charter Act of 1844 when the ability of other banks to issue notes was restricted.

Thomas Speed was Chief Cashier of the Bank of England for 1694 to 1699. On 11 February 1695, the bank issued a notice in the London Gazette that Speed, and several others, were empowered to give notes on behalf of the bank in return either for payment of money or bills. Speed was replaced as Chief Cashier by Thomas Madockes. 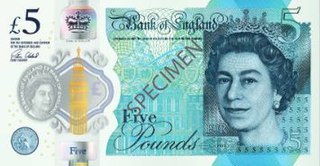 The Bank of England £5 note, also known informally as a fiver, is a sterling banknote. It is the smallest denomination of banknote currently issued by the Bank of England. In September 2016, a new polymer note was introduced, featuring the image of Queen Elizabeth II on the obverse and a portrait of Winston Churchill on the reverse. The old paper note, first issued in 2002 and bearing the image of prison reformer Elizabeth Fry on the reverse, was phased out and ceased to be legal tender after 5 May 2017.

The Bank of England £10 note, also known informally as a tenner, is a sterling banknote. It is the second-lowest denomination of banknote issued by the Bank of England. The current polymer note, first issued in 2017, bears the image of Queen Elizabeth II on the obverse and the image of author Jane Austen on the reverse. The final cotton paper note featuring a portrait of naturalist Charles Darwin, first issued in 2000, was withdrawn from circulation on 1 March 2018. 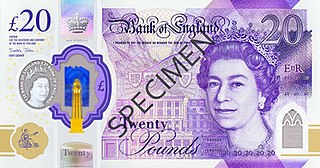 The Bank of England £20 note is a sterling banknote. It is the second-highest denomination of banknote currently issued by the Bank of England. The current polymer note, first issued on 20 February 2020, bears the image of Queen Elizabeth II on the obverse and the image of painter J. M. W. Turner on the reverse. It replaced the cotton paper note featuring a portrait of economist Adam Smith, first issued in 2007.

The Bank of England £50 note is a sterling banknote. It is the highest denomination of banknote currently issued for public circulation by the Bank of England. The current note, the first of this denomination to be printed in polymer, entered circulation on 23 June 2021. It bears the image of Queen Elizabeth II on the obverse and computer scientist and World War II codebreaker Alan Turing on the reverse, with his birth date reflecting the release date. Cotton £50 notes from the previous series will remain in circulation alongside the new polymer notes until 30 September 2022, when this last 'paper' banknote issue will finally cease to be legal tender.

The Bank of England £100,000,000 note, also referred to as Titan, is a non-circulating Bank of England sterling banknote used to back the value of Scottish and Northern Irish banknotes. It is the highest denomination of banknote printed by the Bank of England. As both of these regions have their own currency issued by particular local banks, the non-circulating notes provide the essential link between those currencies and that of England, and security if a local issuing bank were to fail.