The Columbus Blue Birds were a professional Negro league baseball team based in Columbus, Ohio in 1931 and 1933.

Their name appears to have been derived from that of the Columbus Red Birds, the top-level minor league baseball team that played in the American Association from 1931 through 1954.

The Blue Birds, which were one of the five founder members of the second incarnation of the Negro National League, were organized under the ownership of WJ Peebles of Columbus.

Peebles was reported to have built up "a formidable aggregation" and one that was fast growing in favor in the capital city. [3]

Several players, who formerly wore the colors of the Homestead Grays and Kansas City Monarchs had been added to the Birds' roster for their first season. [3]

Columbus started the season well, but proved too weak and finished the first half of the split season in last place of the six team league with a record of 11-18.

The team was disbanded and ended up merging with the Akron Tyrites, one of the top independent Negro league teams of their day. [4] The merged team more or less became the Cleveland Giants, which finished the season. [5] 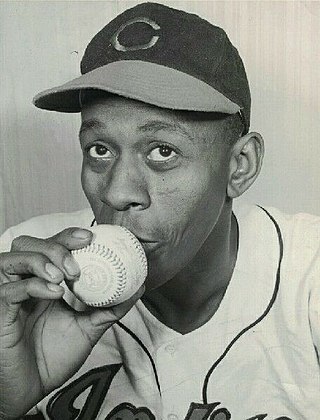 Leroy Robert "Satchel" Paige was an American professional baseball pitcher who played in Negro league baseball and Major League Baseball (MLB). His career spanned five decades and culminated with his induction into the National Baseball Hall of Fame.

The first Negro National League (NNL) was one of the several Negro leagues that were established during the period in the United States when organized baseball was segregated. The league was formed in 1920 with former player Rube Foster as its president.

The second Negro National League was one of the several Negro leagues that were established during the period in the United States when organized baseball was segregated. The league was founded in 1933 by businessman Gus Greenlee of Pittsburgh.

The Homestead Grays were a professional baseball team that played in the Negro leagues in the United States.

The Baltimore Elite Giants were a professional baseball team that played in the Negro leagues from 1920 to 1950. The team was established by Thomas T. Wilson, in Nashville, Tennessee as the semi-pro Nashville Standard Giants on March 26, 1920. The team was renamed the Elite Giants in 1921, and moved to Baltimore, Maryland in 1938, where the team remained for the duration of their existence. The team and its fans pronounced the word "Elite" as "ee-light". 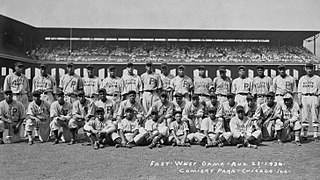 The East–West All-Star Game was an annual all-star game for Negro league baseball players. The game was the brainchild of Gus Greenlee, owner of the Pittsburgh Crawfords. In 1933 he decided to emulate the Major League Baseball All-Star Game, using Negro league players. Newspaper balloting was set up to allow the fans to choose the starting lineups for that first game, a tradition that continued through the series' end in 1962. Unlike the white All-Star game which is played near the middle of the season, the Negro All-Star game was held toward the end of the season.

The Columbus Red Birds were a top-level minor league baseball team that played in Columbus, Ohio, in the American Association from 1931 through 1954. The Columbus club, a member of the Association continuously since 1902, was previously known as the Columbus Senators. It was independently and locally owned through the 1920s.

The Harrisburg Giants were a U.S. professional Negro league baseball team based in Harrisburg, Pennsylvania. Originally formed in April 1890 by Colonel William "C.W." Strothers as an amateur team, they became semi-professional by 1894. They joined the Eastern Colored League (ECL) for the 1924 season with Hall of Fame center fielder Oscar Charleston as playing manager. The Giants became known primarily for their hitting; along with Charleston, outfielder/first baseman Heavy Johnson, winner of the batting triple crown for the 1923 Kansas City Monarchs, was signed away from the rival Negro National League. Speedy outfielder Fats Jenkins, a well-known professional basketball player and member of the New York Rens, also played for Harrisburg throughout its tenure in the ECL.

King Solomon "Sol" White was an American professional baseball infielder, manager and executive, and one of the pioneers of the Negro leagues. An active sportswriter for many years, he wrote the first definitive history of black baseball in 1907. He was elected to the Baseball Hall of Fame in 2006.

The Cleveland Giants were a Negro league baseball team. The team played only one year, 1933. Their home games were contested at Cleveland's Luna Bowl in Luna Park.

The Akron Black Tyrites were a Negro league baseball team that played out another team's schedule for a portion of a single season. They were based in Akron, Ohio, and were a member team of the Negro National League (II). They are also known as the Akron Grays.

League Park refers to two former American football and baseball stadiums located in Akron, Ohio. The original League Park was located at the corner of Carroll St. and Beaver St.; the newer stadium was on Lakeshore Blvd. between W. Long St. and W. Crosier St.

Leroy Morney was an American baseball shortstop in the Negro leagues. He played from 1929 to 1944 with several teams. He was selected to three East-West All-Star Games.

Herman Andrews, nicknamed "Jabbo", was an American baseball outfielder in the Negro leagues. He played from 1930 to 1943 with several teams. 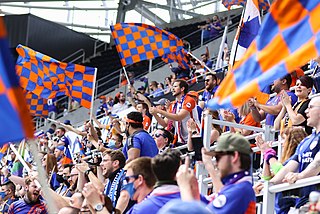