Last updated June 20, 2021
The time during which source code is validated and converted to machine code by a compiler

In computer science, compile time (or compile-time) refers to either the operations performed by a compiler (the "compile-time operations"), programming language requirements that must be met by source code for it to be successfully compiled (the "compile-time requirements"), or properties of the program that can be reasoned about during compilation. Compile time refers to the time duration in which the programming code is converted to the machine code (i.e binary code) and usually occurs before runtime.

Programming language definitions usually specify compile time requirements that source code must meet to be successfully compiled. For example, languages may stipulate that the amount of storage required by types and variables can be deduced.

Properties of a program that can be reasoned about at compile time include range-checks (e.g., proving that an array index will not exceed the array bounds), deadlock freedom in concurrent languages, or timings (e.g., proving that a sequence of code takes no more than an allocated amount of time).

Compile time occurs before link time (when the output of one or more compiled files are joined together) and runtime (when a program is executed). In some programming languages it may be necessary for some compilation and linking to occur at runtime. There is a trade-off between compile-time and link-time in that many compile time operations can be deferred to link-time without incurring extra run-time.

"Compile time" can also refer to the amount of time required for compilation. 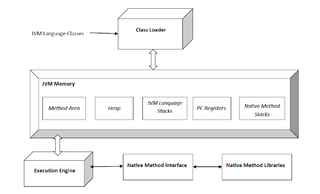 In computing, an optimizing compiler is a compiler that tries to minimize or maximize some attributes of an executable computer program. Common requirements are to minimize a program's execution time, memory footprint, storage size, and power consumption.

In computer science, program analysis is the process of automatically analyzing the behavior of computer programs regarding a property such as correctness, robustness, safety and liveness. Program analysis focuses on two major areas: program optimization and program correctness. The first focuses on improving the program’s performance while reducing the resource usage while the latter focuses on ensuring that the program does what it is supposed to do.

In computer science, runtime, run time, or execution time is the final phase of a computer program's life cycle, in which the code is being executed on the computer's central processing unit (CPU) as machine code. In other words, "runtime" is the running phase of a program.

In computing, just-in-time (JIT) compilation is a way of executing computer code that involves compilation during execution of a program rather than before execution. Most often, this consists of source code or more commonly bytecode translation to machine code, which is then executed directly. A system implementing a JIT compiler typically continuously analyses the code being executed and identifies parts of the code where the speedup gained from compilation or recompilation would outweigh the overhead of compiling that code.

In computer programming, specifically when using the imperative programming paradigm, an assertion is a predicate connected to a point in the program, that always should evaluate to true at that point in code execution. Assertions can help a programmer read the code, help a compiler compile it, or help the program detect its own defects.

In computer programming, bounds checking is any method of detecting whether a variable is within some bounds before it is used. It is usually used to ensure that a number fits into a given type, or that a variable being used as an array index is within the bounds of the array. A failed bounds check usually results in the generation of some sort of exception signal.

Late binding, dynamic binding, or dynamic linkage—though not an identical process to dynamically linking imported code libraries—is a computer programming mechanism in which the method being called upon an object, or the function being called with arguments, is looked up by name at runtime. In other words, a name is associated with a particular operation or object at runtime, rather than during compilation.

In computer science, bounds-checking elimination is a compiler optimization useful in programming languages or runtime systems that enforce bounds checking, the practice of checking every index into an array to verify that the index is within the defined valid range of indexes. Its goal is to detect which of these indexing operations do not need to be validated at runtime, and eliminating those checks.

In computer science, link time refers to the period of time, during the creation of a computer program, in which a linker is being applied to that program. Link time occurs after compile time and before runtime.

In computer science, ahead-of-time compilation is the act of compiling an (often) higher-level programming language into an (often) lower-level language before execution of a program, usually at build-time, to reduce the amount of work needed to be performed at run time.

In computer programming, one of the many ways that programming languages are colloquially classified is whether the language's type system makes it strongly typed or weakly typed. However, there is no precise technical definition of what the terms mean and different authors disagree about the implied meaning of the terms and the relative rankings of the "strength" of the type systems of mainstream programming languages.

In computer science, dynamic software updating (DSU) is a field of research pertaining to upgrading programs while they are running. DSU is not currently widely used in industry. However, researchers have developed a wide variety of systems and techniques for implementing DSU. These systems are commonly tested on real-world programs.

Tracing just-in-time compilation is a technique used by virtual machines to optimize the execution of a program at runtime. This is done by recording a linear sequence of frequently executed operations, compiling them to native machine code and executing them. This is opposed to traditional just-in-time (JIT) compilers that work on a per-method basis.

In computer science, language-based security (LBS) is a set of techniques that may be used to strengthen the security of applications on a high level by using the properties of programming languages. LBS is considered to enforce computer security on an application-level, making it possible to prevent vulnerabilities which traditional operating system security is unable to handle.