A creeper is a low-profile tool used to help a person more easily slide in and out of confined spaces, such as the underside of a car, for performing inspection or maintenance. [1] Other names for such devices include car creeper, garage creeper and mechanic creeper. They are built with a low profile to reduce the amount of added height above the ground, thereby providing as much clearance as possible for the person lying on it.

It is usually a wheeled platform constructed using a stiff frame and wheels. [2] Some also have ergonomic shapes or cutout for the arms and shoulders providing extra room to make it easier to work in the confined space. Other types of creepers include specially designed mats (creeper mats), and there are also various improvised solutions such as lying on cardboard. [3] The alternative to using a creeper is often lying directly on the ground, which gives added clearance, but can make it more difficult to get in and out due to friction against the ground.

Some creepers have dual-uses, such as being able to be folded to make a chair or a stool, or for compact storage. Some also have the ability to recline the headrest somewhat while in the lying position. [4] 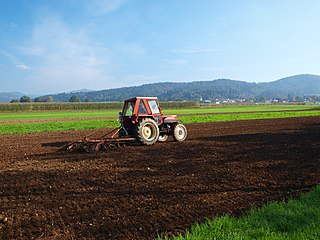 A tractor is an engineering vehicle specifically designed to deliver a high tractive effort at slow speeds, for the purposes of hauling a trailer or machinery such as that used in agriculture, mining or construction. Most commonly, the term is used to describe a farm vehicle that provides the power and traction to mechanize agricultural tasks, especially tillage, but nowadays a great variety of tasks. Agricultural implements may be towed behind or mounted on the tractor, and the tractor may also provide a source of power if the implement is mechanised.

A transmission is a machine in a power transmission system, which provides controlled application of power. Often the term 5-speed transmission refers simply to the gearbox, that uses gears and gear trains to provide speed and torque block conversions from a rotating power source to another device. 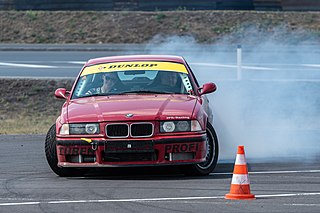 Car tuning is the modification of a car to optimise it for a different set of performance requirements from those it was originally designed to meet. Most commonly this is higher engine performance and dynamic handling characteristics but cars may also be altered to provide better fuel economy, or smoother response. The goal when tuning is the improvement of a vehicle's overall performance in response to the user's needs. Often, tuning is done at the expense of emissions performance, component reliability and occupant comfort.

A mechanic is an artisan, skilled tradesperson, or technician who uses tools to build, maintain, or repair machinery. 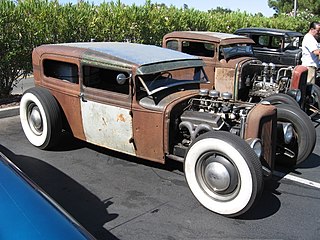 A rat rod, as usually known today, is a custom car with a deliberately worn-down, unfinished appearance, typically lacking paint, showing rust, and made from cheap or cast-off parts. These parts can include non-automotive items that have been repurposed, such as a rifle used as a gear shifter, wrenches as door handles, or hand saws as sun visors. Whether or not so appointed, the rat rod uniquely conveys its builder’s imagination.

Creeper, Creepers, or The Creeper may refer to:

Jeepers Creepers is a 2001 American horror film written and directed by Victor Salva. It stars Gina Philips and Justin Long as Trish and Darry Jenner, siblings who are pursued by the Creeper, a demonic creature and mysterious serial killer portrayed by Jonathan Breck. The film takes its name from the 1938 song of the same name, which is featured in the film under a version by Paul Whiteman. Patricia Belcher and Eileen Brennan also appear in supporting roles, with Salva making a cameo appearance. 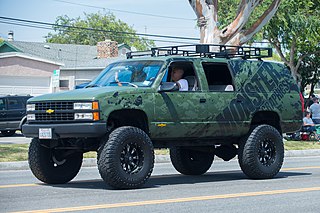 Ride height or ground clearance is the amount of space between the base of an automobile tire and the lowest point of the automobile ; or, more properly, to the shortest distance between a flat, level surface, and the lowest part of a vehicle other than those parts designed to contact the ground. Ground clearance is measured with standard vehicle equipment, and for cars, is usually given with no cargo or passengers.

An auto mechanic is a mechanic with a variety of automobile makes or either in a specific area or in a specific make of automobile. In repairing cars, their main role is to diagnose the problem accurately and quickly. They often have to quote prices for their customers before commencing work or after partial disassembly for inspection. Their job may involve the repair of a specific part or the replacement of one or more parts as assemblies. 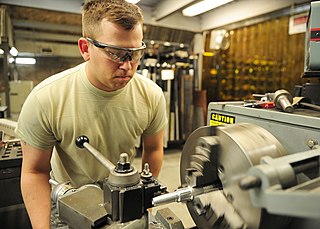 Tool and die makers are highly skilled craftsman working in the manufacturing industries. Variations on the name include tool maker,toolmaker, die maker,diemaker, mold maker,moldmaker or tool jig and die-maker depending on which area of concentration or industry an individual works in.

A jack is a mechanical lifting device used to apply great forces or lift heavy loads. A mechanical jack employs a screw thread for lifting heavy equipment. A hydraulic jack uses hydraulic power. The most common form is a car jack, floor jack or garage jack, which lifts vehicles so that maintenance can be performed. Jacks are usually rated for a maximum lifting capacity. Industrial jacks can be rated for many tons of load.

The multimachine is an all-purpose open source machine tool that can be built inexpensively by a semi-skilled mechanic with common hand tools, from discarded car and truck parts, using only commonly available hand tools and no electricity. Its size can range from being small enough to fit in a closet to one hundred times that size. The multimachine can accurately perform all the functions of an entire machine shop by itself. 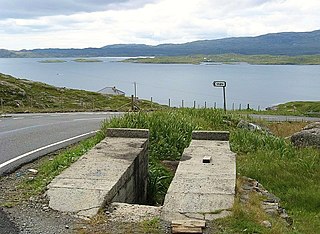 A car ramp provides a simple method of raising an automobile from the ground in order to access the undercarriage. Utilizing a ramp is reported among the three easiest ways to elevate a car. The remaining two methods include using a jack or jack stands. Car ramps also offer safety for mechanics due to vehicle stability during car maintenance and repairs. Some ramp types can be built at home and hand-made with simple tools.

The pipipi, also known as brown creeper, New Zealand creeper, or New Zealand titmouse, is a small passerine bird endemic to the South Island of New Zealand. They are specialist insectivores, gleaning insects from branches and leaves. They have strong legs and toes for hanging upside down while feeding. 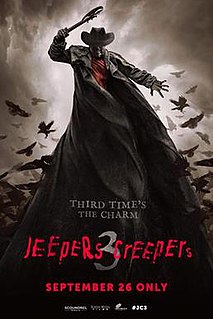 Jeepers Creepers 3 is a 2017 American horror film written and directed by Victor Salva and the third film in the Jeepers Creepers film series, taking place in between Jeepers Creepers and Jeepers Creepers 2. Jonathan Breck reprises his role as The Creeper. Gina Philips returns in a cameo as Trish Jenner, her first return to the series since the original film. The film was shown in theaters on September 26, 2017 in what was originally announced as a one-night-only showing and was then shown again on October 4, 2017.

Lisle Corporation is an American manufacturer of auto mechanic's specialty tools. It is an independent, private corporation that has been operated in Clarinda, Iowa by members of the Lisle family since its founding in 1903.

Creeper World is a tower defense real-time strategy video game developed by Knuckle Cracker. The player must survive the onslaught of the titular blue mass, known as Creeper, which rises up the playing field and attempts to destroy their base of operations, Odin City.

An underground personnel carrier is any heavy duty vehicle designed specifically for the safe transport of personnel and their supplies into underground work areas. The most common underground applications is for the mining of either precious metal or coal.

Creepers are fictional characters from the sandbox video game Minecraft. They are hostile mobs that can be encountered in the game world at any given time or location. Instead of traditionally attacking the player, they creep up on the player and explode, destroying blocks in the surrounding area and potentially damaging the player if they are inside the blast radius. Their green camouflage and silent behavior aid in stealth attacks. Creepers were first added to Minecraft in an alpha update to the game on August 31, 2009.