According to the principle of diffraction, when a wave front passes an obstruction, it spreads out into the shadowed space. A creeping wave in electromagnetism or acoustics is the wave that is diffracted around the shadowed surface of a smooth body such as a sphere. 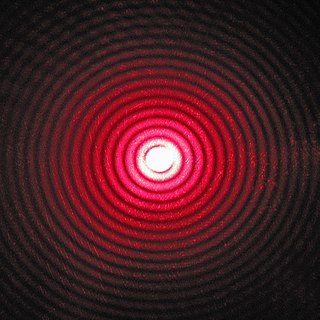 Diffraction refers to various phenomena that occur when a wave encounters an obstacle or a slit. It is defined as the bending of waves around the corners of an obstacle or through an aperture into the region of geometrical shadow of the obstacle/aperture. The diffracting object or aperture effectively becomes a secondary source of the propagating wave. Italian scientist Francesco Maria Grimaldi coined the word "diffraction" and was the first to record accurate observations of the phenomenon in 1660. 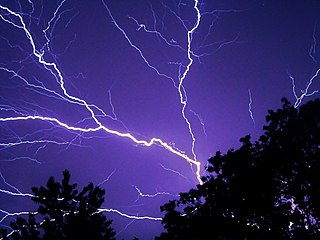 Creeping waves greatly extend the ground wave propagation of long wavelength (low frequency) radio. They also cause both of a person's ears to hear a sound, rather than only the ear on the side of the head facing the origin of the sound. In radar ranging, the creeping wave return appears to come from behind the target. 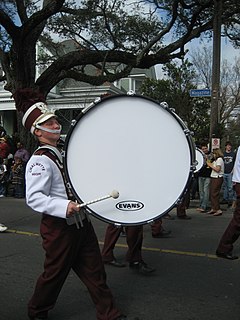 In physics, sound is a vibration that typically propagates as an audible wave of pressure, through a transmission medium such as a gas, liquid or solid.

Vladimir Fock made important contributions to the understanding and calculation of creeping waves. They are described by Airy functions.

Vladimir Aleksandrovich Fock was a Soviet physicist, who did foundational work on quantum mechanics and quantum electrodynamics.

In the physical sciences, the Airy functionAi(x) is a special function named after the British astronomer George Biddell Airy (1801–1892). The function Ai(x) and the related function Bi(x), are linearly independent solutions to the differential equation

The Huygens–Fresnel principle is a method of analysis applied to problems of wave propagation both in the far-field limit and in near-field diffraction and also reflection. It states that every point on a wavefront is itself the source of spherical wavelets, and the secondary wavelengths emanating from different points mutually interfere. The sum of these spherical wavelets forms the wavefront.

In electromagnetic wave propagation, the knife-edge effect or edge diffraction is a redirection by diffraction of a portion of the incident radiation that strikes a well-defined obstacle such as a mountain range or the edge of a building. 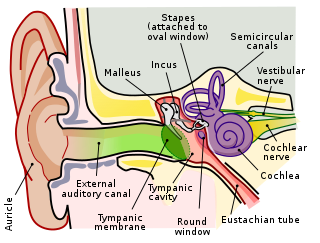 In physics and engineering, a ripple tank is a shallow glass tank of water used in schools and colleges to demonstrate the basic properties of waves. It is a specialized form of a wave tank. The ripple tank is usually illuminated from above, so that the light shines through the water. Some small ripple tanks fit onto the top of an overhead projector, i.e. they are illuminated from below. The ripples on the water show up as shadows on the screen underneath the tank. All the basic properties of waves, including reflection, refraction, interference and diffraction, can be demonstrated. 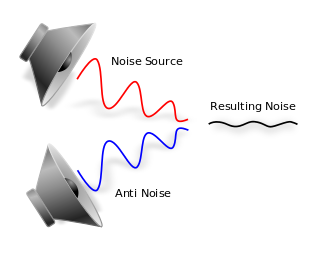 Active noise control (ANC), also known as noise cancellation, or active noise reduction (ANR), is a method for reducing unwanted sound by the addition of a second sound specifically designed to cancel the first.

Atmospheric diffraction is manifested in the following principal ways:

Sound localization is a listener's ability to identify the location or origin of a detected sound in direction and distance. 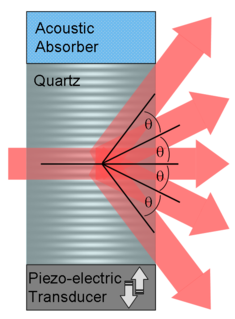 An acousto-optic modulator (AOM), also called a Bragg cell, uses the acousto-optic effect to diffract and shift the frequency of light using sound waves. They are used in lasers for Q-switching, telecommunications for signal modulation, and in spectroscopy for frequency control. A piezoelectric transducer is attached to a material such as glass. An oscillating electric signal drives the transducer to vibrate, which creates sound waves in the material. These can be thought of as moving periodic planes of expansion and compression that change the index of refraction. Incoming light scatters off the resulting periodic index modulation and interference occurs similar to Bragg diffraction. The interaction can be thought of as a three-wave mixing process resulting in Sum-frequency generation or Difference-frequency generation between phonons and photons.

In physics, physical optics, or wave optics, is the branch of optics that studies interference, diffraction, polarization, and other phenomena for which the ray approximation of geometric optics is not valid. This usage tends not to include effects such as quantum noise in optical communication, which is studied in the sub-branch of coherence theory.

An acoustic horn or waveguide is a tapered sound guide designed to provide an acoustic impedance match between a sound source and free air. This has the effect of maximizing the efficiency with which sound waves from the particular source are transferred to the air. Conversely, a horn can be used at the receiving end to optimize the transfer of sound from the air to a receiver.

A head shadow or acoustic shadow is a region of reduced amplitude of a sound because it is obstructed by the head (diffracted). Sound may have to travel through and around the head in order to reach an ear. The obstruction caused by the head can account for a significant attenuation of overall intensity as well as cause a filtering effect. The filtering effects of head shadowing are an essential element of sound localisation—the brain weighs the relative amplitude, timbre, and phase of a sound heard by the two ears and uses the difference to interpret directional information.

An acoustic shadow or sound shadow is an area through which sound waves fail to propagate, due to topographical obstructions or disruption of the waves via phenomena such as wind currents, buildings, or sound barriers.

Acousto-optics is a branch of physics that studies the interactions between sound waves and light waves, especially the diffraction of laser light by ultrasound through an ultrasonic grating.

An ultrasonic grating is a type of diffraction grating produced by interfering ultrasonic waves in a medium altering the physical properties of the medium, and hence the refractive index, in a grid-like pattern. The term acoustic grating is a more general term that includes operation at audible frequencies. 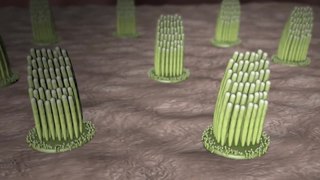 Hearing, or auditory perception, is the ability to perceive sounds by detecting vibrations, changes in the pressure of the surrounding medium through time, through an organ such as the ear. The academic field concerned with hearing is auditory science.