Dagblad Suriname is one of the leading daily Surinamese newspapers. It is published in the Dutch language in Paramaribo. Dagblad was founded in 2002, and is part of FaFam Publishing N.V. [1] The newspaper has been described as centre left. [2] 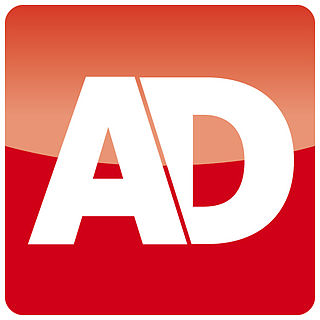 The Party for National Unity and Solidarity is a political party in Suriname historically supported by Javanese Surinamese.

Heracles Almelo is a Dutch professional football club based in Almelo, founded in 1903. The club has won the Dutch national title twice, in 1927 and 1941. Heracles won the Eerste Divisie title during the 2004–05 season, gaining promotion to the Eredivisie for the first time in 28 years. The club has remained in the top division ever since. In 2012, reached the KNVB Cup final for the first time in club history, losing to PSV in the final. The club's main rival is FC Twente.

FC Blauw-Wit Amsterdam was a Dutch football club from Amsterdam. The name referred to the colours of their uniform, blue and white.

Johannes Chrishostomus "Kick" Smit was a Dutch football player. He earned 29 caps and scored 26 goals for the Netherlands national football team, and played in the 1934 and 1938 World Cups. He is the first Netherlands football player who scored a goal in a World Cup. During his club career, he played for HFC Haarlem.

Nieuw Jacobkondre is a town in the Sipaliwini District of Suriname. It is situated on the Saramacca River. The village is inhabited by Matawai people.

Utrechtse Sportvereniging Elinkwijk, known as USV Elinkwijk is a Dutch football club, based in Utrecht. It played professional football during the years 1955–1970.

Bastiaan ("Bas") Jacob Paauwe was a Dutch footballer who was active as a midfielder. Paauwe played his whole career at Feijenoord and won 31 caps for the Netherlands, scoring one goal.

Hendrikus ("Hennie") Hollink was a football (soccer) player and manager from the Netherlands, who played for Roda JC, FC Twente and Heracles Almelo. He played professional football himself in the 1950s and 1960s. He died on 31 January 2018.

De West is one of the main newspapers of Suriname. 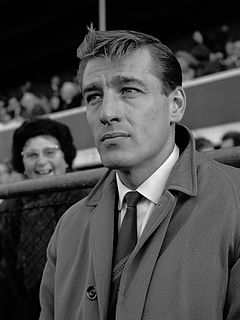 Keith Matthew Spurgeon was an English football player and manager.

Rainville is a resort in Suriname, located in the Paramaribo District. Its population at the 2012 census was 22,747. 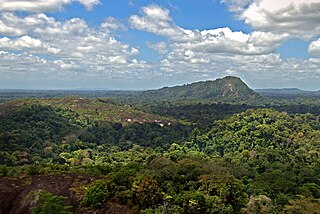 Boven Coppename is a resort in Suriname, located in the Sipaliwini District. Its population at the 2012 census was 539. The resort is mainly inhabited by indigenous people of the Tiriyó, and Maroons of the Kalina tribe. The main village is Bitagron. Other villages include Corneliskondre and Donderskamp. 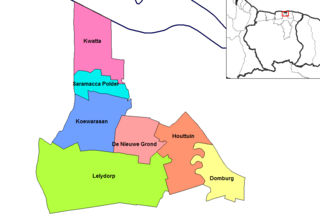 Koewarasan is a resort in Suriname, located in the Wanica District. Its population at the 2012 census was 27,713. It is located to the west of Paramaribo, and is mainly a suburban area. The municipality was founded in 1939, and was originally intended for settlers from Java, however due to World War II, only a single group arrived. The majority of the population are East Indian. Prior to 1939, Koewarasan was an agricultural area used for the cultivation of rice.

Franz Fuchs was an association football manager from Austria.

Damil Dankerlui is a footballer who plays as a right back for Eredivisie club FC Groningen. Born in the Netherlands, he represents the Suriname national team.

Berg en Dal is a village in the resort of Klaaskreek in the Brokopondo District of Suriname. The village is located on the Suriname River.

David George Findlay was a Surinamese politician, editor, and writer. He was the owner and chief editor of the newspaper De West.