Paramaribo (Dutch pronunciation: [ˌpaːraːˈmaːriboː] ; nicknamed Par'bo) is the capital and largest city of Suriname, located on the banks of the Suriname River in the Paramaribo District. Paramaribo has a population of roughly 241,000 people (2012 census), almost half of Suriname's population. [1] The historic inner city of Paramaribo has been a UNESCO World Heritage Site since 2002. [2]

The city is named for the Paramaribo tribe living at the mouth of the Suriname River; the name is from Tupi–Guarani para "large river" + maribo "inhabitants". [3]

The name Paramaribo is probably a corruption of the name of an Indian village, spelled Parmurbo in the earliest Dutch sources. [4] This was the location of the first Dutch settlement, a trading post established by Nicolaes Baliestel and Dirck Claeszoon van Sanen in 1613. [4] English and French traders also tried to establish settlements in Suriname, including a French post established in 1644 near present-day Paramaribo.

All earlier settlements were abandoned some time before the arrival of English settlers in 1650 to found Surinam. They were sent by the English governor of Barbados, Lord Francis Willoughby, 5th Baron Willoughby of Parham, and established a town on the site of Paramaribo (though probably south of the current town center). The town was protected by a fort, called Fort Willoughby. In 1662, Governor Willoughby was granted the settlement and surrounding lands (extending into Suriname's interior) by King Charles II. Around 1665 the village of Paramaribo was expanded and quickly outranked the earlier settlement of Torarica. [5]

In 1667, during the Second Anglo-Dutch War, Paramaribo was conquered by a squadron of ships under Abraham Crijnssen. The Treaty of Breda in 1667 confirmed Paramaribo as the leading town of the now Dutch colony of Suriname. The fort protecting Paramaribo was renamed Fort Zeelandia in honor of the Dutch province that had financed Crijnssen's fleet. (The town was also renamed New Middelburg but the name did not catch on with the inhabitants).

The population of Paramaribo has always been very diverse. Among the first British settlers were many Jews [6] and one of the oldest synagogues in the Americas is found in Paramaribo. [7] The population of the town was greatly increased after 1873, when former enslaved people (who had been freed in 1863) were allowed to stop working for their former masters and leave the sugar plantations.

Paramaribo has remained the capital of Suriname, from its colonial days through the independence of Suriname in 1975 to the present day. The old town has suffered many devastating fires over the years, notably in January 1821 (which destroyed over 400 buildings) and September 1832 (which destroyed nearly 50 buildings). [8] The slaves Kodjo, Mentor, and Present were found guilty of arson, and burnt alive. [9]

The city is located on the Suriname River, approximately 15 kilometres (9.3 mi) inland from the Atlantic Ocean, in the Paramaribo district.

Paramaribo features a tropical rainforest climate (Af), under the Köppen climate classification. Because Paramaribo is more subject to the Intertropical Convergence Zone than the trade winds and sees no tropical cyclones, its climate is classified as equatorial. The city has no true dry season; all 12 months of the year average more than 60 millimetres or 2.4 inches of rainfall, but the city does experience noticeably wetter and drier periods during the year. The northern hemisphere “autumn” (September through November) is the driest period of the year in Paramaribo, and the heaviest rainfall occurs from April to July. Common to many cities with this climate, temperatures are relatively consistent throughout the course of the year, with average high temperatures of 31 degrees Celsius and average low temperatures of 22 degrees Celsius. Paramaribo on average receives roughly 2,200 millimetres or 87 inches of rainfall each year.

Paramaribo has a population of 240,924 people (2012 census). While the population number is stagnating in recent years, many towns in the surrounding Wanica District are increasing in population. [1]

The city is famed for its diverse ethnic makeup, including Creoles (African or mixed African-European descent) 27%, Indian (East Indian descent) 23%, Multiracials 18%, Maroons (descendants of escaped enslaved Africans) 16%, Javanese (Indonesian descent) 10%, Indigenous (descendants of native population) 2%, Chinese (descendants of 19th-century contract workers) 1.5%, and smaller numbers of Europeans (primarily of Dutch and Portuguese descent), Lebanese and Jews. In the past decades a significant number of Brazilians, Guyanese and new Chinese immigrants have settled in Paramaribo.

Paramaribo is the business and financial centre of Suriname. Even though the capital city does not produce significant goods itself, almost all revenues from the country's main export products gold, oil, bauxite, rice, and tropical wood are channeled through its institutions. All banks, insurance corporations and other financial and commercial companies are headquartered in Paramaribo. Around 75 percent of Suriname's GDP is consumed in Paramaribo.

Tourism is an increasingly important sector, with most visitors coming from the Netherlands. [13]

Paramaribo is served by the Johan Adolf Pengel International Airport and Zorg en Hoop Airport for local flights. The Jules Wijdenbosch Bridge, which is part of the East-West Link, connects Paramaribo with Meerzorg on the other side of the Suriname River.

The Jules Sedney Harbour is the main harbour for cargo. [14] The former harbour of Waterkant is used by ferries. [15]

Most airlines like Gum Air, Caricom Airways and Blue Wing Airlines have their head offices on the grounds of Zorg en Hoop Airport in Paramaribo.

Paramaribo's institution of higher learning is Anton de Kom University of Suriname, the country's only university.

The Dutch colonial town established in 17th and 18th centuries was declared a UNESCO World Heritage Site in 2002. [16] The historic inner city is located along the left bank of the Suriname River. The original architecture of buildings and street plan has largely remained intact and preserved.

Paramaribo is twinned with: 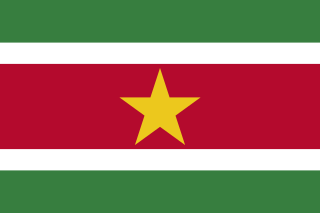 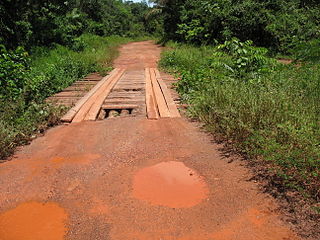 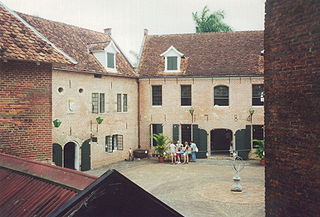 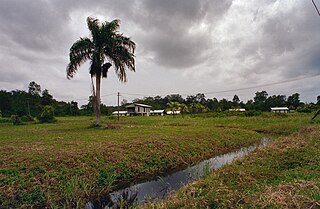 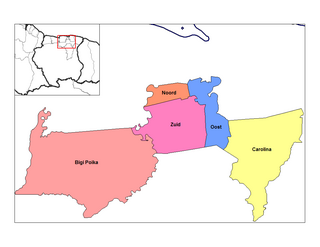 Para is a district of northern Suriname. Para's capital city is Onverwacht, with other towns including Paranam, and Zanderij. Para has a population of 24,700 and an area of 5,393 km2. The district is the mining and forestry centre of Suriname, with many large bauxite mining operations operating. The district is a mixture of forest and savannas.

Paramaribo is a district of Suriname, encompassing the capital city of Paramaribo and the surrounding area.

Totness is a town in Suriname, located in the Coronie district, of which it is the capital. Totness is the oldest settlement in the district. 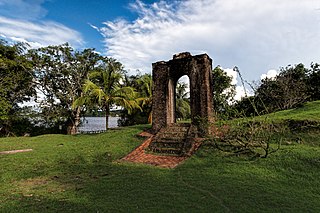 Nieuw Amsterdam is the capital of the Commewijne District in Suriname. It is a small coastal town situated at the confluence of the Suriname River and Commewijne River, just across from Paramaribo, the country's capital. Its population at the 2012 census was 5,650, with around 1,200 people living in the main town, most of whom are of Javanese and East Indian origin. It is the location of the historical Fort Nieuw-Amsterdam, today an open-air museum. The town of Mariënburg with former sugarcane factory is located 3 km from Nieuw Amsterdam and part of the resort. 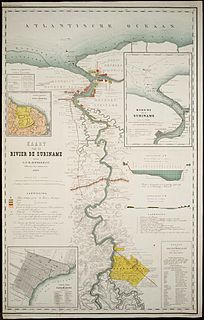 Tapanahoni is a resort in Suriname, located in the Sipaliwini District. Its population at the 2012 census was 13,808. Tapanahoni is a part of Sipaliwini which has no capital, but is directly governed from Paramaribo. Tapanahony is an enormous resort which encompasses a quarter of the country of Suriname. The most important town is Diitabiki which is the residence of the granman of the Ndyuka people since 1950, and the location of the oracle. 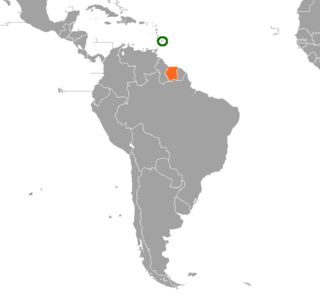 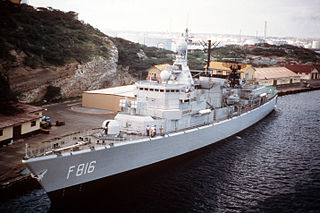 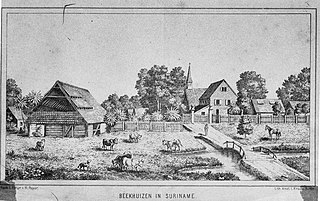 Beekhuizen is a former sugarcane plantation and currently a resort in Suriname, located in the Paramaribo District. Its population at the 2012 census was 17,185.

Rainville is a resort in Suriname, located in the Paramaribo District. Its population at the 2012 census was 22,747. 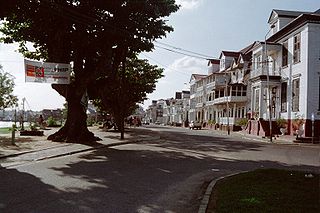 Centrum is a resort in Suriname, located in the Paramaribo District. Its population at the 2012 census was 20,631. The historical centre of Paramaribo is located within the resort. The city centre is mainly in original condition, contains 291 listed monuments, and has of 2002 been designated a Unesco World Heritage Site.

The Waterkant is the oldest and one of the most important streets of Paramaribo, Suriname. The street is located in the historic centre on the Suriname River, and was the location where ships used to arrive. The street starts at the Onafhankelijkheidsplein and extends to the Central Market. As of 2002, it has been designated a Unesco World Heritage Site.