Gum Air was founded in 1971 by six brothers of the Gummels family. The company they started in March 1964 was agriculture airspray company named Surinam Sky Farmers and Gum Air it's offspring focused more on domestic flights and regional charters. [1] . Where as Surinam Sky Farmers has it's base in the rice district of Nickerie at the Wageningen Airstrip together with Overeem Air Service maintaining Grumman Ag Cat aircraft, Gum Air has it's base at Zorg en Hoop airfield in the capital city Paramaribo and now mainly flies with single engine Cessna airplanes and twin-engined de Havilland Canada DHC-6 Twin Otter aircraft.

Gum Air also owns dedicated Heliport, Gummels Heliport Paramaribo, built in Suriname at the Gummelsweg in the neighborhood of Kwatta near the city of Paramaribo, Suriname. Privately owned by the Gummels family the heliport is mainly used for helicopter charters and primarily for offshore development activities within the country.

Internationally Gum Air has an agreement with Trans Guyana Airways and together they provide regular scheduled flights between Zorg en Hoop Airport, Paramaribo (Suriname) and Ogle Airport of Georgetown (Guyana). [2]

Gum Air has flown various unique types of STOL Short Take Off & Landing aircraft from Suriname in the past such as Dornier DO 28D-1 Skyservant, GAF Nomad, Britten-Norman BN-2 Islander and also helicopter types such as Agusta-Bell 204B & Bell 206B Jet Ranger II

Gum Air today owns a fleet of 9 aircraft plus a helicopter, consisting of four types of aircraft varying from 5 seats to 19 seats.

After the creation of the Statute of the Kingdom of the Netherlands, the Royal Netherlands Army was entrusted with the defence of Suriname, while the defence of the Netherlands Antilles was the responsibility of the Royal Netherlands Navy. The army set up a separate Troepenmacht in Suriname. Upon independence in 1975, this force was turned into the Surinaamse Krijgsmacht (SKM):, Surinamese Armed Forces. On February 25, 1980, a group of 15 non-commissioned officers and one junior officer, under the leadership of sergeant major Dési Bouterse, staged a coup d'état and overthrew the Government. Subsequently, the SKM was rebranded as Nationaal Leger (NL), National Army. 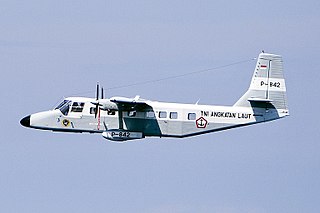 The GAF Nomad is a utility aircraft produced by the Government Aircraft Factories (GAF) of Australia in Melbourne. Supported by the Australian Government, design work began in the mid-1960s, and it made its maiden flight on 23 July 1971. Despite some export sales and commercial operations, sales were not as sufficient and production stopped in 1985. The twin-turboprop, high-wing aircraft has a retractable gear and came in two variants: the initial N22, followed by the stretched N24. 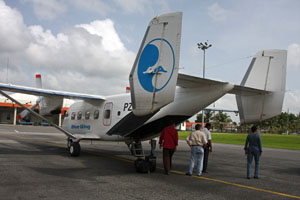 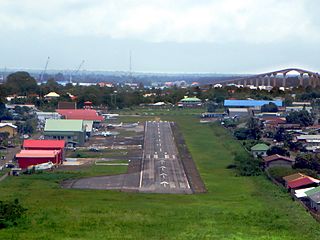 Apetina Airstrip is an airstrip near the village Apetina in Suriname.

Major Henk Fernandes Airport, also known as Nieuw Nickerie Airport, is near Nieuw Nickerie, the capital city of the Nickerie district in Suriname. This is one of the oldest airports in Suriname, in use since 1953, when the Piper Cub (PZ-NAC) of Kappel-van Eyck named "Colibri" landed there from Zorg en Hoop Airport.

Gummels Heliport Paramaribo, is the first dedicated Heliport built in Suriname at the Gummelsweg in the neighborhood of Kwatta near the city of Paramaribo, Suriname. Privately owned and used by the Gummels family who also own the Gum Air airline and the crop dust service Surinam Sky Farmers. The heliport is mainly used for helicopter charters and primarily for offshore development activities.