The Beechcraft 1900 is a 19-passenger, pressurized twin-engine turboprop fixed-wing aircraft that was manufactured by Beechcraft. It was designed, and is primarily used, as a regional airliner. It is also used as a freight aircraft and corporate transport, and by several governmental and military organisations. With customers favoring larger regional jets, Raytheon ended production in October 2002. [3]

The aircraft was designed to carry passengers in all weather conditions from airports with relatively short runways. It is capable of flying in excess of 600 miles (970 km), although few operators use its full-fuel range. In terms of the number of aircraft built and its continued use by many passenger airlines and other users, it is one of the most popular 19-passenger airliners in history. [4]

The Beechcraft 1900's design lineage began in 1949 with the Beechcraft Model 50 Twin Bonanza, a 5-passenger, reciprocating engine utility aircraft designed for the U.S. Army. A larger passenger cabin was added to the Twin Bonanza's airframe, and called the Model 65 Queen Air. This aircraft was, in turn, further modified by adding turboprop engines and cabin pressurization, and named the Model 90 King Air. A stretched version of the King Air was later developed and designated the Model 200 Super King Air. Beechcraft developed the 1900 directly from the Super King Air, in order to provide a pressurized commuterliner to compete with the Swearingen Metro and the British Aerospace Jetstream. [5]

Since the 1900 is derived from the King Air, all 1900s share certain characteristics with that aircraft. Cockpit controls and operations are similar to those of the King Air. While Federal Aviation Regulations require two pilots for passenger airline operations, the 1900 is designed and certificated for single-pilot operation in corporate or cargo settings, as is the King Air.

The airplane is certified to fly up to an altitude of 25,000 feet (7,600 m) above mean sea level with its pressurized cabin. [8] It is designed to operate in most weather conditions, including icing conditions, and it is usually equipped with weather radar to help pilots avoid severe weather. [8] The aircraft can be fitted with a lavatory, using space otherwise available for passenger seating and cargo storage. [8]

The original design is known simply as the Beechcraft 1900. It features two airstair passenger boarding doors: one near the tail of the aircraft much like the smaller King Airs, and a second at the front just behind the cockpit. It has a small cargo door near the tail for access to the baggage compartment, which is behind the passenger compartment. Only three airframes were built, with "UA" serial numbers of UA-1, UA-2, and UA-3. UA-1 and UA-2 are stored at a Beechcraft facility in Wichita, Kansas. UA-3, registered FAB-043, served in Bolivia until it crashed in November 2011. [9]

It quickly became clear that having two airstair doors on an aircraft holding only 19 passengers was excessive. In creating the 1900C, Beechcraft kept the front airstair, but eliminated the aft airstair door, installing an enlarged cargo door in its place. Other than the redesigned door layout, the early 1900Cs were substantially similar to the original 1900s. These were assigned serial numbers starting with the letters UB. A total of 74 UB version were built, many of which remain in service. [6] Aircraft in the UA and UB series employ a bladder-type fuel tank system in the wings. Later 1900Cs use a wet wing fuel system: entire sections of the wing are sealed off for use as fuel tanks. This design change allowed more fuel to be stored, substantially increasing the 1900C's range. The wet wing 1900Cs were assigned serial numbers beginning with "UC." These aircraft are also referred to as 1900C-1s. The wet wings proved popular, and the UC is the most common version of the low-ceiling 1900, with 174 UC airframes built. [6]

Raytheon manufactured six 1900C aircraft for use by the U.S. military. These were assigned "UD" serial numbers, UD-1 through UD-6.

While the 1900C had become a popular regional airliner, Beechcraft undertook a substantial redesign of the aircraft, and in 1991 introduced a new version called the 1900D.

The 1900 and 1900C, like most 19-passenger airliners and small business jets, have fairly small passenger cabins, with ceilings so low that passengers (of typical male heights) cannot walk through the interior without bending forward. The 1900D was designed to remedy this by providing a "stand-up cabin", which would allow most passengers to walk upright. It is one of only two 19-seat airliners with this feature, the other being the British Aerospace Jetstream 31/32. [6]

Because the taller passenger cabin adds both weight and drag to the airplane, other elements of the 1900D were also changed. More powerful engines and modified propellers were installed, winglets were added to reduce drag and increase the wings' efficiency, and the tail was made larger in response to the more powerful engines. The cockpit was updated with an Electronic Flight Instrument System (EFIS). The 1900D was certified under the then-new FAR Part 23 "Commuter Category" standards, which had replaced the earlier SFAR 41C. Since the UD serial numbers were already in use by the military 1900s, the 1900D airplanes have serial numbers beginning with UE. The 1900D is the most popular version of the airliner, with 439 of the 1900D built. [6]

A supplemental type certificate has been awarded to Alpine Air Express to convert 1900D into cargo aircraft. The STC involved adding a second emergency exit to the cockpit and converting the interior to a cargo configuration. The 1900D can carry 900 cubic feet of cargo, 30% more than a 1900C. Powered by PT6-67D, the super freighter has a max takeoff weight of 17,120lbs and is certified under the commuter category. Due to its standup cabin, the 1900D has a large internal volume. The large volume lends the aircraft well to the cargo industry where many packages are bulky and low in density. The 1900D is able to carry nearly as much volume as an EMB-120 and is certified for single pilot cargo operations. The single pilot crew and surplus of airframes allows for reduced operator costs. [10]

Examples of C-12J aircraft in military service include one used for GPS jamming tests at the 586th Flight Test Squadron, Holloman Air Force Base, New Mexico, [11] and three based at the 459th Airlift Squadron, Yokota Air Base, Japan. [4] The U.S. Army operates both C-12J and 1900D aircraft along with other C-12 (King Air) aircraft. [12]

The King Air ExecLiner was a marketing name for a corporate version of the Beechcraft 1900C.

Military and government operators include: [14] 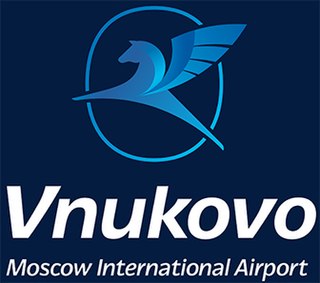 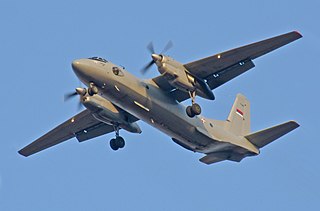 The Antonov An-26 is a twin-engined turboprop civilian and military transport aircraft, designed and produced in the Soviet Union from 1969 to 1986. 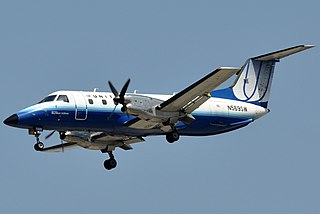 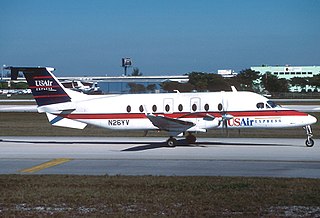 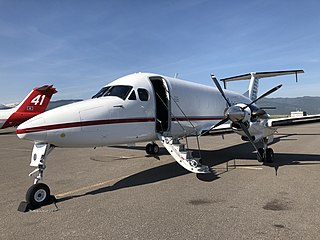 Alpine Air Express is an American airline based in Provo, Utah, USA. It operates scheduled air cargo services on over 100 routes throughout Colorado, Minnesota, Montana, Nebraska, North Dakota, South Dakota, Wyoming, Idaho, and Utah. Its main base is the Provo Municipal Airport. 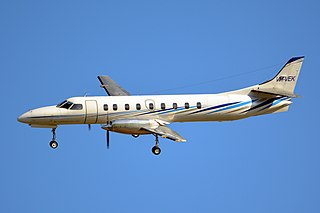 Luxor International Airport is the main airport serving the city of Luxor, Egypt. It is located 6 km (4 miles) east of the city. Many charter airlines use the airport, as it is a popular tourist destination for those visiting the River Nile and the Valley of the Kings.

Central African Airways (CAA) was a supranational airline corporation serving as flag carrier for Southern Rhodesia, Northern Rhodesia and Nyasaland, which were organised as the Federation of Rhodesia and Nyasaland, also known as the Central African Federation, from 1953 to 1963. Based in Salisbury, it offered an extensive network of domestic passenger and cargo flights, as well as international services to major cities in Southern and Central Africa, and a route to London. In 1960, CAA owned 15 aircraft and had 1,155 employees.

Rumbek Airport is an airport in South Sudan, near Rumbek the capital of Western Lakes State. The airport is served by several national airlines and by air charter service providers.

Solenta Aviation is an airline based in Johannesburg, South Africa, with its maintenance base at OR Tambo International Airport. The company was founded in 2000 and operates cargo flights on regional routes throughout the Sub-Saharan Africa on behalf of DHL Aviation. Solenta Aviation also operates extensively for the oil and gas industry ("OGP"), offering passenger charter, cargo and aircraft lease services. 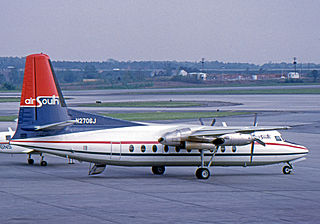 Air South was an airline from the United States. Founded as Nationwide Airlines Southeast in 1969, the company had its headquarters in St. Simons, Georgia. Out of its base at Atlanta Municipal Airport, Air South operated regional scheduled passenger flights within the southeastern USA, using a small fleet of Fairchild F-27 and Martin 4-0-4 aircraft, as well as the Beechcraft Model 99.

The Antonov An-12 is a transport aircraft designed and manufactured by the Ukrainian manufacturing and services company Antonov. Given the long operational history of the An-12, more than 190 An-12s have crashed involving many casualties. The An-12 has also been involved in several aviation incidents.

Aerolift Philippines Flight 75 was a scheduled domestic flight from Ninoy Aquino International Airport to Surigao Airport. On 18 May 1990, the Beechcraft 1900 operating the flight crashed just after takeoff, 1 km south of the airport, killing all 19 passengers and 2 crew, as well as a family of four on the ground. Flight 75 was the second fatal accident of a Beechcraft 1900 and remains the worst loss of life in a crash involving that model.