The Human Development Index (HDI) is a statistic composite index of life expectancy, education (mean years of schooling completed and expected years of schooling upon entering the education system), and per capita income indicators, which are used to rank countries into four tiers of human development. A country scores a higher HDI when the lifespan is higher, the education level is higher, and the gross national income GNI (PPP) per capita is higher. It was developed by Pakistani economist Mahbub ul Haq and was further used to measure a country's development by the United Nations Development Programme (UNDP)'s Human Development Report Office. [1] [2] [3]

The index is based on the human development approach, developed by Mahbub ul Haq, anchored in Amartya Sen's work on human capabilities, often framed in terms of whether people are able to "be" and "do" desirable things in life. Examples include – being: well fed, sheltered, healthy; doing: work, education, voting, participating in community life. The freedom of choice is central – someone choosing to be hungry (as during a religious fast) is quite different from someone who is hungry because they cannot afford to buy food, or because the country is in a famine. [5]

The index does not take into account several factors, such as the net wealth per capita or the relative quality of goods in a country. This situation tends to lower the ranking for some of the most advanced countries, such as the G7 members and others. [6]

The origins of the HDI are found in the annual Human Development Reports produced by the Human Development Report Office of the United Nations Development Programme (UNDP). These were devised and launched by Pakistani economist Mahbub ul Haq in 1990, and had the explicit purpose "to shift the focus of development economics from national income accounting to people-centered policies". Haq believed that a simple composite measure of human development was needed to convince the public, academics, and politicians that they can and should evaluate development not only by economic advances but also improvements in human well-being.

In its 2010 Human Development Report, the UNDP began using a new method of calculating the HDI. The following three indices are used:

Fifteen is the projected maximum of this indicator for 2025.

Eighteen is equivalent to achieving a master's degree in most countries.

Finally, the HDI is the geometric mean of the previous three normalized indices:

The HDI combined three dimensions last used in its 2009 report:

This methodology was used by the UNDP until their 2011 report.

The formula defining the HDI is promulgated by the United Nations Development Programme (UNDP). [12] In general, to transform a raw variable, say

, into a unit-free index between 0 and 1 (which allows different indices to be added together), the following formula is used:

are the lowest and highest values the variable

The Human Development Index (HDI) then represents the uniformly weighted sum with 1⁄3 contributed by each of the following factor indices:

The Human Development Report 2020 by the United Nations Development Programme was released on 15 December 2020, and calculates HDI values based on data collected in 2019. [13] The list comprises countries and territories with very high human development:

The list below displays the top-ranked country from each year of the Human Development Index. Norway has been ranked the highest sixteen times, Canada eight times, and Japan and Iceland twice.

In each original HDI

The year represents the time period from which the statistics for the index were derived. In parentheses is the year when the report was published.

The HDI has extended its geographical coverage: David Hastings, of the United Nations Economic and Social Commission for Asia and the Pacific, published a report geographically extending the HDI to 230+ economies, whereas the UNDP HDI for 2009 enumerates 182 economies and coverage for the 2010 HDI dropped to 169 countries. [20] [21]

The Human Development Index has been criticized on a number of grounds, including alleged lack of consideration of technological development or contributions to the human civilization, focusing exclusively on national performance and ranking, lack of attention to development from a global perspective, measurement error of the underlying statistics, and on the UNDP's changes in formula which can lead to severe misclassification in the categorisation of "low", "medium", "high" or "very high" human development countries. [22]

Economists Hendrik Wolff, Howard Chong and Maximilian Auffhammer discuss the HDI from the perspective of data error in the underlying health, education and income statistics used to construct the HDI. They identified three sources of data error which are due to (i) data updating, (ii) formula revisions and (iii) thresholds to classify a country's development status and conclude that 11%, 21% and 34% of all countries can be interpreted as currently misclassified in the development bins due to the three sources of data error, respectively. The authors suggest that the United Nations should discontinue the practice of classifying countries into development bins because: the cut-off values seem arbitrary, can provide incentives for strategic behavior in reporting official statistics, and have the potential to misguide politicians, investors, charity donors and the public who use the HDI at large. [22]

In 2010, the UNDP reacted to the criticism and updated the thresholds to classify nations as low, medium, and high human development countries. In a comment to The Economist in early January 2011, the Human Development Report Office responded [23] to a 6 January 2011 article in the magazine [24] which discusses the Wolff et al. paper. The Human Development Report Office states that they undertook a systematic revision of the methods used for the calculation of the HDI, and that the new methodology directly addresses the critique by Wolff et al. in that it generates a system for continuously updating the human-development categories whenever formula or data revisions take place.

In 2013, Salvatore Monni and Alessandro Spaventa emphasized that in the debate of GDP versus HDI, it is often forgotten that these are both external indicators that prioritize different benchmarks upon which the quantification of societal welfare can be predicated. The larger question is whether it is possible to shift the focus of policy from a battle between competing paradigms to a mechanism for eliciting information on well-being directly from the population. [25]

A per capita GDP of $3,200 ranks Solomon Islands as a lesser developed nation. Over 75% of its labour force is engaged in subsistence farming and fishing.

A developed country is a sovereign state that has a high quality of life, developed economy and advanced technological infrastructure relative to other less industrialized nations. Most commonly, the criteria for evaluating the degree of economic development are gross domestic product (GDP), gross national product (GNP), the per capita income, level of industrialization, amount of widespread infrastructure and general standard of living. Which criteria are to be used and which countries can be classified as being developed are subjects of debate. A point of reference of 20,000 USD in 2021 USD nominal GDP per capita for the IMF is a good point of departure, it is a similar level of development to the United States in 1960. Some countries with lower nominal gdp per capita could be considered as developed given that their PPP gdp per capita is much higher to their nominal gdp per capita, therefore having a higher standard of living than would be considered if one only looks at nominal gdp.

The Human Poverty Index (HPI) was an indication of the poverty of community in a country, developed by the United Nations to complement the Human Development Index (HDI) and was first reported as part of the Human Deprivation Report in 1997. It was considered to better reflect the extent of deprivation in deprived countries compared to the HDI. In 2010, it was supplanted by the UN's Multidimensional Poverty Index.

Human development is the process characterized by the variation of material conditions. These conditions influence the possibilities of satisfying needs and desires. They also explore and realize the physical and psychic, biological and cultural, individual and social potentials of each person. It is also the name of the science that seeks to understand how and why the people of all ages and circumstances change or remain the same over time. It involves studies of the human condition with its core being the capability approach. The inequality adjusted Human Development Index is used as a way of measuring actual progress in human development by the United Nations. It is an alternative approach to a single focus on economic growth, and focused more on social justice, as a way of understanding progress.

An Education index is a component of the Human Development Index published every year by the United Nations Development Programme. Alongside the GDP Index and Life Expectancy Index, it helps measure the educational attainment, GDP per capita and life expectancy of countries. 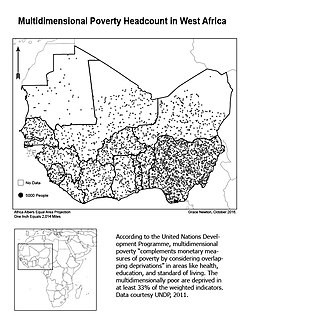 Multidimensional Poverty Indices use a range of indicators to calculate a summary poverty figure for a given population, in which a larger figure indicates a higher level of poverty. This figure considers both the proportion of the population that is deemed poor, and the 'breadth' of poverty experienced by these 'poor' households, following the Alkire & Foster 'counting method'. The method was developed following increased criticism of monetary and consumption based poverty measures, seeking to capture the deprivations in non-monetary factors that contribute towards well-being. While there is a standard set of indicators, dimensions, cutoffs & thresholds used for a 'Global MPI', the method is flexible and there are many examples of poverty studies that modify it to best suit their environment. The methodology has been mainly, but not exclusively, applied to developing countries.

The Gender Inequality Index (GII) is an index for measurement of gender disparity that was introduced in the 2010 Human Development Report 20th anniversary edition by the United Nations Development Programme (UNDP). According to the UNDP, this index is a composite measure to quantify the loss of achievement within a country due to gender inequality. It uses three dimensions to measure opportunity cost: reproductive health, empowerment, and labor market participation. The new index was introduced as an experimental measure to remedy the shortcomings of the previous indicators, the Gender Development Index (GDI) and the Gender Empowerment Measure (GEM), both of which were introduced in the 1995 Human Development Report.