Multidimensional Poverty Indices use a range of indicators to calculate a summary poverty figure for a given population, in which a larger figure indicates a higher level of poverty. This figure considers both the proportion of the population that is deemed poor, and the 'breadth' of poverty experienced by these 'poor' households, following the Alkire & Foster 'counting method'. [1] The method was developed following increased criticism of monetary and consumption based poverty measures, seeking to capture the deprivations in non-monetary factors that contribute towards well-being. While there is a standard set of indicators, dimensions, cutoffs & thresholds used for a 'Global MPI', [2] the method is flexible and there are many examples of poverty studies that modify it to best suit their environment. The methodology has been mainly, but not exclusively, [3] applied in developing countries.

The Global Multidimensional Poverty Index(MPI) was developed in 2010 by the Oxford Poverty & Human Development Initiative (OPHI) and the United Nations Development Programme [4] and uses health, education and standard of living indicators to determine the degree of poverty experienced by a population. It has since been used to measure acute poverty across over 100 developing countries. The Global MPI is released annually by OPHI and the results published on its website. It replaced the Human Poverty Index.

Multidimensional Poverty Indices typically use the household as their unit of analysis, though this is not an absolute requirement. [5] A household is deprived for a given indicator if they fail to satisfy a given 'cutoff' (e.g. having at least one adult member with at least 6 years of education). A household is assigned a 'deprivation score' determined by the number of indicators they are deprived in and the 'weights' assigned to those indicators. Each dimension (Health, Education, Standard of Living, etc.) is typically given an equal weighting, and each indicator within the dimension is also typically weighted equally. If this household deprivation score exceeds a given threshold (e.g. 1/3) then a household is considered to be 'multiply deprived', or simply 'poor'. The final 'MPI score' (or 'Adjusted Headcount Ratio') is determined by the proportion of households deemed 'poor', multiplied by the average deprivation score of 'poor' households. [5]

MPI advocates state that the method can be used to create a comprehensive picture of people living in poverty, and permits comparisons both across countries, regions and the world and within countries by ethnic group, urban/rural location, as well as other key household and community characteristics. MPIs are useful as an analytical tool to identify the most vulnerable people - the poorest among the poor, revealing poverty patterns within countries and over time, enabling policy makers to target resources and design policies more effectively. [5] Critics of this methodology have pointed out that changes to cutoffs and thresholds, as well as the indicators included and weightings attributed to them can change MPI scores and the resulting poverty evaluation. [6] [7]

Multidimensional Poverty Indices used for purposes other than global comparison have sometimes used different dimensions, including income and consumption.

The indicators selected for other MPI oriented studies vary according to availability of data and the context, [11] as well as the theoretical considerations of the researchers. [12]

Calculation of the index

The Alkire-Foster (AF) method is a way of measuring multidimensional poverty developed by OPHI’s Sabina Alkire and James Foster. Building on the Foster-Greer-Thorbecke poverty measures, it involves counting the different types of deprivation that individuals experience at the same time, such as a lack of education or employment, or poor health or living standards. These deprivation profiles are analysed to identify who is poor, and then used to construct a multidimensional index of poverty (MPI).

Identifying who is poor

To identify the poor, the AF method counts the overlapping or simultaneous deprivations that a person or household experiences in different indicators of poverty. The indicators may be equally weighted or take different weights. People are identified as multidimensionally poor if the weighted sum of their deprivations is greater than or equal to a poverty cut off – such as 20%, 30% or 50% of all deprivations.

It is a flexible approach which can be tailored to a variety of situations by selecting different dimensions (e.g. education), indicators of poverty within each dimension (e.g. how many years schooling a person has) and poverty cut offs (e.g. a person with fewer than five years of education is considered deprived).

The most common way of measuring poverty is to calculate the percentage of the population who are poor, known as the headcount ratio (H). Having identified who is poor, the AF methodology generates a unique class of poverty measures (Mα) that goes beyond the simple headcount ratio. Three measures in this class are of high importance:

M0 can be calculated with ordinal as well as cardinal data, which is why it is most often used. Cardinal data are required to calculate M1 and M2.

Factor H for country X is:

Factor A for country X is:

Thus, the MPI for country X is:

Comparisons with other indicators

HDI, the Human Development Index, was developed by Mahbub ul Haq and Amartya Sen, in 1990, and was also developed by the UNDP. It is calculated as the geometric mean of the normalized indices of the three dimensions of human development it takes into account: health, education and standard of living. The UNDP is trying to improve on the HDI formula by introducing the IHDI (Inequality affected HDI).

While both HDI and MPI use the 3 broad dimensions health, education and standard of living, HDI uses only single indicators for each dimension of poverty while MPI uses more than one indicator for each one. This, amongst other reasons, has led to the MPI only being calculated for just over 100 countries, where data is available for all these diverse indicators, while HDI is calculated for almost all countries.

However, though HDI is thus more universally applicable, its relative sparsity of indicators also makes it more susceptible to bias. Indeed, some studies have found it to be somewhat biased towards GDP per capita, as demonstrated by a high correlation between HDI and the log of GDPpc. Hence, HDI has been criticized for ignoring other development parameters.

Comparison with other indicators

Both HDI and MPI have been criticized by economists such as Ratan Lal Basu for not taking "moral/emotional/spiritual dimensions" of poverty into consideration. It has been attempted to capture these additional factors by the "Global Happiness Index". 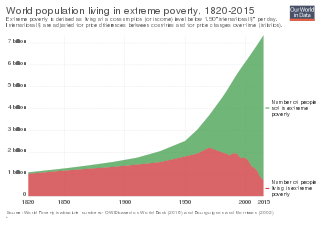 Extreme poverty, deep poverty, abject poverty, absolute poverty, destitution, or penury, was defined by the United Nations (UN) in its 1995 report of the World Summit for Social Development as "a condition characterized by severe deprivation of basic human needs, including food, safe drinking water, sanitation facilities, health, shelter, education and information. It depends not only on income but also on access to services." Historically, other definitions have been proposed within the United Nations.

Quality of life (QOL) is an overarching term for the quality of the various domains in human life. It is an expected standard level that consists of the expectations of an individual or society for a good life. These expectations are guided by the values, goals and socio-cultural context in which an individual lives. QOL is a subjective, multidimensional concept that defines a standard level for emotional, physical, material and social well-being. It serves as a reference against which an individual or society can measure the different domains of a personal life. The extent to which one's own life coincides with a desired standard level - or, put differently, the degree to which these domains give satisfaction and as such contribute to one's subjective well-being - is called life satisfaction.

The Human Development Index (HDI) is a statistic composite index of life expectancy, education, and per capita income indicators, which are used to rank countries into four tiers of human development. A country scores a higher HDI when the lifespan is higher, the education level is higher, and the gross national income GNI (PPP) per capita is higher. It was developed by Pakistani economist Mahbub ul Haq and Indian economist Amartya Sen and was further used to measure a country's development by the United Nations Development Programme (UNDP)'s Human Development Report Office.

The Human Poverty Index (HPI) was an indication of the poverty of community in a country, developed by the United Nations to complement the Human Development Index (HDI) and was first reported as part of the Human Deprivation Report in 1997. It was considered to better reflect the extent of deprivation in deprived countries compared to the HDI. In 2010 it was supplanted by the UN's Multidimensional Poverty Index.

The Indices of deprivation 2004 is a deprivation index at the small area level, created by the British Department for Communities and Local Government(DCLG).

The Institute for International Economic Policy is a research institution dedicated to the study of global economic governance, based in Washington, DC at the Elliott School of International Affairs of the George Washington University. Notable IIEP members include Sabina Alkire, James Foster, and Jeni Klugman. Partnerships with organizations like the World Bank Group, International Monetary Fund, Internet Society, and The Nature Conservancy have led to academic conferences and policy seminars.

The Oxford Poverty and Human Development Initiative (OPHI) is an economic research centre within the Oxford Department of International Development at the University of Oxford, England, that was established in 2007.

The Gender Inequality Index (GII) is an index for measurement of gender disparity that was introduced in the 2010 Human Development Report 20th anniversary edition by the United Nations Development Programme (UNDP). According to the UNDP, this index is a composite measure to quantify the loss of achievement within a country due to gender inequality. It uses three dimensions to measure opportunity cost: reproductive health, empowerment, and labor market participation. The new index was introduced as an experimental measure to remedy the shortcomings of the previous indicators, the Gender Development Index (GDI) and the Gender Empowerment Measure (GEM), both of which were introduced in the 1995 Human Development Report.

The Fordham Francis Index is a multidimensional measure of international poverty. It is a simple tool that relies on seven primary indicators which are categorized into a Material Well-being Index and a Spiritual Well-being Index. It was launched on September 23, 2016 at a Fordham conference entitled Pope Francis' Call for Escaping Poverty co-sponsored by the Vatican Foundation Centesimus Annus Pro Pontifice. The research was conducted by students from Fordham's Graduate Program in International Political Economy and Development(IPED), under the research direction of Dr. Henry Schwalbenberg. The Fordham Francis Index is a response to the Pope's Address to the United Nations in New York last September 25, 2015. 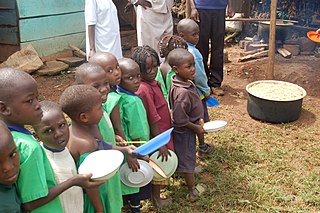 Kenya is a country in Africa. Although its economy enjoys the leading position in eastern and central Africa, 16.9% of its population lives below the poverty line. This severe poverty is mainly caused by an undiversified economy, government corruption, health problems, and a water crisis. In turn, poverty also worsens these factors. Fortunately, Kenya’s government has made many efforts to address the issue of poverty, and it has received help from international institutions as well, significantly. The incident rate of poverty has streadily decreased, as shown by a recent MPI index. However, the end to poverty in Kenya still needs long-term efforts.