Per capita income (PCI) or total income measures the average income earned per person in a given area (city, region, country, etc.) in a specified year. It is calculated by dividing the area's total income by its total population.

Critics often cite the following drawbacks to the use of per capita income:

Gross domestic product (GDP) is a monetary measure of the market value of all the final goods and services produced and sold in a specific time period by countries. Due to its complex and subjective nature this measure is often revised before being considered a reliable indicator. GDP (nominal) per capita does not, however, reflect differences in the cost of living and the inflation rates of the countries; therefore, using a basis of GDP per capita at purchasing power parity (PPP) may be more useful when comparing living standards between nations, while nominal GDP is more useful comparing national economies on the international market. Total GDP can also be broken down into the contribution of each industry or sector of the economy. The ratio of GDP to the total population of the region is the per capita GDP.

Purchasing power parity (PPP) is the measurement of prices in different countries that uses the prices of specific goods to compare the absolute purchasing power of the countries' currencies, and, to some extent, their people's living standards. In many cases, PPP produces an inflation rate equal to the price of the basket of goods at one location divided by the price of the basket of goods at a different location. The PPP inflation and exchange rate may differ from the market exchange rate because of tariffs, and other transaction costs. 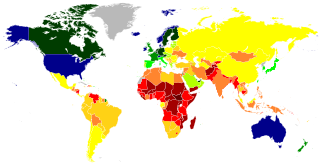 Lists of countries by GDP per capita list the countries in the world by their gross domestic product (GDP) per capita. The lists may be based on nominal or purchasing power parity GDP. Gross national income (GNI) per capita accounts for inflows and outflows of foreign capital. Income inequality metrics measure the distribution of income between rich and poor. 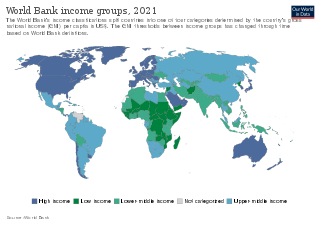 The international dollar, also known as Geary–Khamis dollar, is a hypothetical unit of currency that has the same purchasing power parity that the U.S. dollar had in the United States at a given point in time. It is mainly used in economics and financial statistics for various purposes, most notably to determine and compare the purchasing power parity and gross domestic product of various countries and markets. The year 1990 or 2000 is often used as a benchmark year for comparisons that run through time. The unit is often abbreviated, e.g. 2000 US dollars or 2000 International$.