Sacchetti was born in 1944. [1] His first screen credit was for Dario Argento's film The Cat o' Nine Tails . [1] He predominantly worked with Lucio Fulci and Lamberto Bava. [1]

He has worked with several television film projects with Lamberto Bava in the later half of the 1980s. [1] Sacchetti stated that for his screenplays, he would only learn who the director would be a week before the film went into production. [2]

Producers such as De Angelis would come to him and ask him to write two to five lines for a film in various genres such as adventure films, westerns and pornography. [2] Following this posters would be made for the films. When Foreign production had found interest in his write-ups, he would state that De Angelis would phone him and tell him which of the stories he had potential to sell and to write the scripts immediately. [2]

He has worked with several television film projects with Lamberto Bava in the later half of the 1980s. [1] As of 2017, Sacchetti was still writing for film and television. [1]

Note: The films listed as N/A are not necessarily chronological.

Mario Bava was an Italian filmmaker who worked variously as a director, cinematographer, special effects artist and screenwriter, frequently referred to as the "Master of Italian Horror" and the "Master of the Macabre". His low-budget genre films, known for their distinctive visual flair and stylish technical ingenuity, feature recurring themes and imagery concerning the conflict between illusion and reality, as well as the destructive capacity of human nature. 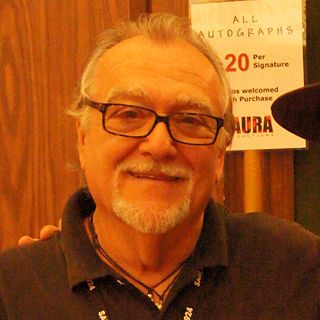 Lamberto Bava is an Italian film director. Born in Rome, Bava began working as an assistant director for his director father Mario Bava. Lamberto co-directed the 1979 television film La Venere d'Ille with his father and in 1980 directed his first solo feature film Macabre.

Demons 2 is a 1986 Italian horror film directed by Lamberto Bava. It is a sequel to Bava's 1985 film Demons and stars David Knight, Nancy Brilli, Coralina Cataldi Tassoni as well as Dario Argento's youngest daughter, Asia Argento, in her debut film performance at age 10. The demons from the first film invade the real world through a television broadcast, turning the residents of an apartment building into bloodthirsty monsters.

Fernando Di Leo was an Italian film director and script writer born in San Ferdinando di Puglia, Italy. Fernando di Leo made 17 films as a director and about 50 scripts from 1964 to 1985. 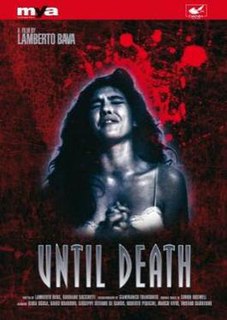 Until Death Italian: Per sempre is a 1988 Italian made-for-TV horror film directed by Lamberto Bava.

A Blade in the Dark is a 1983 Italian giallo film directed by Lamberto Bava. Originally planned for television, the film was made as a nearly two hour piece split into four parts which would end with a murder scene. After the film was found to be too gory for Italian television censors, it was re-edited to be a feature film.

Manhattan Baby is a 1982 Italian horror film directed by Lucio Fulci, starring Christopher Connelly and Carlo De Mejo. The film begins in Egypt where Susie, the daughter of archaeologist George Hacker is given a mysterious talisman from an old woman while her father is investigating in a tomb where he becomes blind after being exposed to a blue light. Back in New York, George only gradually recovers his vision as strange deaths occur around them with the cause seemingly to be the amulet.

Sergio Salvati is an Italian cinematographer who was born in Trastevere, a working class neighborhood of Rome, Italy. His father, Aldofo Salvati, was already a key grip in the early days of Italian cinema, and through his father's contacts Sergio began his career developing negatives in a small photographic laboratory in Rome, the SPES directed by Di Ettore Catalucci. 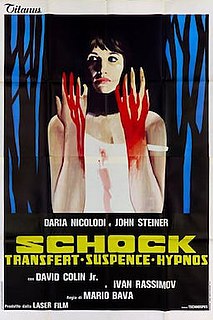 Shock is a 1977 Italian horror film directed by Mario Bava and starring Daria Nicolodi, John Steiner, and David Colin, Jr. Its plot focuses on a woman who moves into the home she shared with her deceased former husband, where she finds herself tormented by supernatural occurrences. It was Bava's last theatrical feature before he died of a heart attack in 1980.

Fabrizio De Angelis is an Italian director, screenwriter and producer.