AllMovie [2] (previously All Movie Guide) is an online guide service website with information about films, television programs, and screen actors. [3] As of 2015 [update] , AllMovie.com and the AllMovie consumer brand are owned by RhythmOne. [1]

The AllMovie database was licensed to tens of thousands of distributors and retailers for point-of-sale systems, websites and kiosks. The AllMovie database is comprehensive, including basic product information, cast and production credits, plot synopsis, professional reviews, biographies, relational links and more.

AllMovie data was accessed on the web at the AllMovie.com website. It was also available via the AMG LASSO media recognition service, which can automatically recognize DVDs.

The AMG consumer facing web properties AllMusic.com, AllMovie.com and AllGame.com were sold by Rovi in August 2013 to All Media Network, LLC. The buyers also include the original founders of SideReel and Ackrell Capital investor Mike Ackrell. [5]

AllMusic is an American online music database. It catalogs more than 3 million album entries and 30 million tracks, as well as information on musical artists and bands. Initiated in 1991, the database was first made available on the Internet in 1994. AllMusic is owned by RhythmOne.

AMG may refer to:

Lions Gate Entertainment Corporation, doing business as Lionsgate, is an American-Canadian entertainment company. It was formed by Frank Giustra on July 10, 1997, in Vancouver, British Columbia, Canada and is currently headquartered in Santa Monica, California, United States. In addition to its flagship Lionsgate Films division, which generated the seventh-highest gross revenue in North America in 2015, the company contains other divisions such as Lionsgate Television and Lionsgate Interactive. It owns a variety of subsidiaries such as Summit Entertainment, Debmar-Mercury, and Starz Inc.

Salem Media Group, Inc. is an American radio broadcaster, Internet content provider, and magazine and book publisher based in Camarillo, California, targeting audiences interested in Christian values and what it describes as "family-themed content and conservative values." In addition to its radio properties, the company owns Salem Radio Network, which syndicates talk, news and music programing to approximately 2,400 affiliates; Salem Media Representatives, a radio advertising company; Salem Web Network, an Internet provider of Christian content and online streaming with over 100 Christian content and conservative opinion websites; and Salem Publishing, a publisher of Christian themed magazines. Salem owns 117 radio stations in 38 markets, including 60 stations in the top 25 markets and 29 in the top 10, making it tied with CBS Radio for fifth-largest radio broadcaster. FamilyTalk is a Christian-themed talk format on Sirius XM Radio Channel 131. Additionally, Salem owns conservative websites Townhall.com, RedState, Hot Air, and PJ Media, as well as Twitter aggregator Twitchy.

Kevin Michael Richardson is an American actor, voice actor, and singer who has played a multitude of characters in animated series and video games. He is known for his distinctively deep voice and has played mostly villainous characters since the 1990s. He has made numerous voice-over appearances on Family Guy, American Dad! and The Cleveland Show. He was nominated for two Daytime Emmy Awards for voicing the Joker in The Batman (2004–2008). 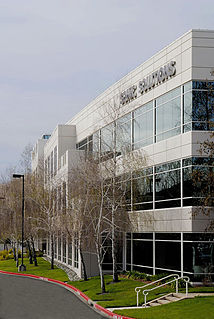 Sonic Solutions was an American computer software company headquartered in Novato, California. In addition to having a number of offices in the U.S., the company also maintained offices in Europe and Asia. It was acquired by Rovi Corporation in 2010.

MoodLogic was a software company founded in 1998 by Tom Sulzer, Christian Pirkner, Elion Chin and Andreas Weigend, and was one of the first online music recommendation systems. The company obtained ratings on over 1 million songs by over 50,000 distinct listeners as part of its proprietary method for modeling user preference space.

CinemaNow was an international over-the-top (OTT) provider of on-demand, Internet streaming media available to viewers in the United States, Canada and the United Kingdom. The company was founded in 1999 and was headquartered in Los Angeles, California. CinemaNow changed hands several times over the years and was eventually shut down on August 1, 2017.

Gemstar–TV Guide International, Inc. was a media company that licensed interactive program guide technology to multichannel video programming distributors such as cable and satellite television providers, and consumer electronics manufacturers; video recorder scheduling codes under brands such as VCR Plus; as well as serving as publishers of TV Guide magazine as well as operators of tvguide.com, owners of TV Guide Network and TVG Network, and provided various related services. On May 2, 2008, Gemstar–TV Guide International, Inc. became a wholly owned subsidiary of Macrovision Solutions Corporation, which later changed its name to Rovi Corporation on July 16, 2009.

Founded in 1991, Muze, Inc. was a business-to-business provider of media information, metadata, and digital preview samples that enable search, discovery, and purchase of digital entertainment content. Muze media information databases are used by businesses to support the sale of entertainment products – such as music tracks and albums, videos and DVDs, books, and video games – and to attract and retain subscribers to Internet, mobile, and social networking sites. Muze was based in New York City with operations in North America and the United Kingdom.

SideReel is a website that offers users the ability to search for television shows, get new episode alerts, watch full episodes online and mark the episodes they've watched. The company also announced it had surpassed 1 million unique visitors in one day. It is a TV community site with user discussions, reviews, and news. SideReel acts as a medium, connecting users to content centered on the shows that interest them and organizing the information around those shows.

Defy Media was an American digital media company that produced original online content for the 12–34 age group. Originally founded in 1996 as Alloy Online, the final company was formed in 2013 by its merger with Break Media.

Regent, L.P. is a multi-sector private equity firm based in Beverly Hills, California. Many of Regent's investments have been in the software, technology, consumer products, retail and media space. Its founder and chairman is Michael Reinstein.