Annand was educated at the Duncan of Jordanstone College of Art in the city of Dundee. He then taught for fourteen years. [2] [3]

In 1988, Annand decided to devote himself full-time to his sculpture work. His work can be seen in many cities in England, Scotland, Wales and Northern Ireland. Many of Annands works are placed in public spaces and relate to local history or literature. In 2009, he unveiled the sculpture The Turf Man which is based on the poem Digging out the bundle Death of a Naturalist (1966). He was commissioned by the County Council in conjunction with the NRA in Ireland to create a sculpture to celebrate Patrick Kavanagh's poem Dancing with Kitty Stobling. The sculpture is visible on the Carrickmacross bypass section of the N2. [4] In 2010, he won a commission to create a £100,000 tribute to Cardinal Thomas Wolsey, one of Suffolk's most influential figures. The completed work was placed close to Curson House on St Peter's Street in Ipswich. [5]

The artist lives and works in Kilmany in the Scottish county of Fife. [5] He is a member of the Royal British Society of Sculptors. 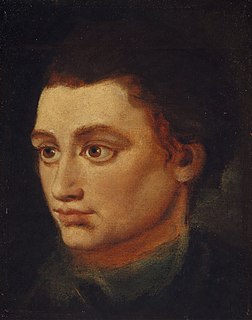 Robert Fergusson was a Scottish poet. After formal education at the University of St Andrews, Fergusson led a bohemian life in Edinburgh, the city of his birth, then at the height of intellectual and cultural ferment as part of the Scottish enlightenment. Many of his extant poems were printed from 1771 onwards in Walter Ruddiman's Weekly Magazine, and a collected works was first published early in 1773. Despite a short life, his career was highly influential, especially through its impact on Robert Burns. He wrote both Scottish English and the Scots language, and it is his vivid and masterly writing in the latter leid for which he is principally acclaimed. 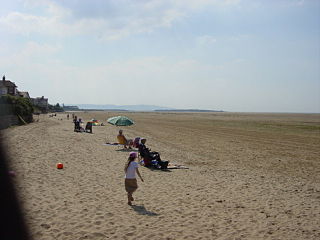 Hoylake is a seaside town within the Metropolitan Borough of Wirral, Merseyside, England. The town is located at the north western corner of the Wirral Peninsula, near to the town of West Kirby and where the River Dee estuary meets the Irish Sea. Historically part of Cheshire, at the time of the Domesday it was within the Hundred of Wilaveston.

Sir John Robert Steell was a Scottish sculptor. He is best known for a number of sculptures displayed in Edinburgh, including the statue of Sir Walter Scott at the base of the Scott Monument. 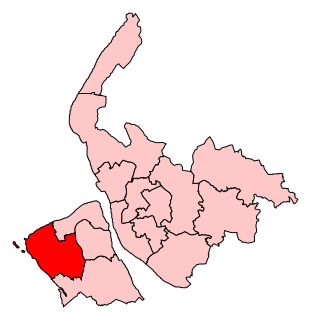 Wirral West is a county constituency represented in the House of Commons of the Parliament of the United Kingdom. It elects one Member of Parliament (MP) by the first past the post system of election. In 2017, with 55,377 people eligible to vote, Wirral West had the smallest electorate of any constituency in England. The current MP is Margaret Greenwood of the Labour Party.

Benno Schotz was an Estonian-born Scottish sculptor, and one of twentieth century Scotland's leading artists.

The National Wallace Monument is a tower standing on the shoulder of the Abbey Craig, a hilltop overlooking Stirling in Scotland. It commemorates Sir William Wallace, a 13th-century Scottish hero. 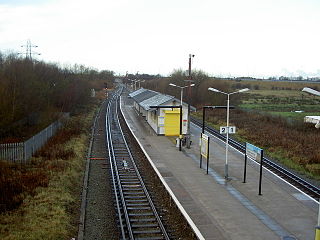 Bidston railway station is a railway station that serves the village of Bidston, Birkenhead, on the Wirral, England. The station is situated at the junction of the West Kirby branch of the Wirral Line, which is part of the Merseyrail network, and with the Borderlands Line from Wrexham Central, operated by Transport for Wales. Bidston is the northern terminal of the Borderlands Line.

The Royal Society of Sculptors (RSS) is British charity established in 1905 which promotes excellence in the art and practice of sculpture. Its headquarters is a centre for contemporary sculpture, on Old Brompton Road, South Kensington, London. It is the oldest and largest organisation dedicated to sculpture in the UK. Until 2017 it was the Royal British Society of Sculptors. 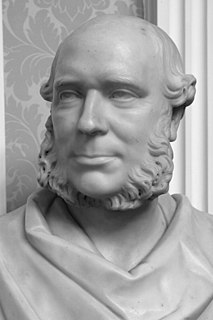 William Brodie was a Scottish sculptor, working in Edinburgh in the 19th century.

Edward Bainbridge Copnall was a British sculptor and painter. Best known for his architectural and decorative sculptures featuring allegorical and religious subjects. He was the President of the Royal Society of Sculptors from 1961 to 1966.

John Hutchison was a Scottish sculptor based in Edinburgh. He was the son of an unnamed builder, and his artistic life began as a thirteen-year-old woodcarving apprentice. He attended art school in the evenings, then later became a student at the Trustees Academy. and attracted the patronage of its owner, Patrick Allan Fraser, who gave him commissions to fund his study in Rome. Although after Rome he continued to enjoy ancient Roman sculptural themes, he remained in Edinburgh for the rest of his life, working in wood, clay and marble, and concentrating on portraiture of Scottish people, and images of Scottish myth and history. He created the bust of Sir Walter Scott in Poets’ Corner in Westminster Abbey. He was a successful artist who received commissions from Queen Victoria.

Thomas Stuart Burnett ARSA was a Scottish sculptor in the 19th century.

Michelle de Bruin is a sculptor and artist, working primarily in stone. She has been based in the Scottish Borders since 1993.

Angela Godfrey is an English sculptor and Member of the Royal Society of Sculptors.

Shona Kinloch is a Scottish artist based in East Kilbride who specialises in sculpture. 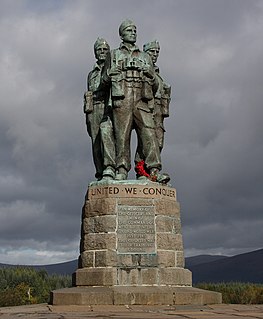 Scott Sutherland was a Scottish sculptor, best known for the Commando Memorial in Spean Bridge. He was Head of Sculpture at Duncan of Jordonstone College of Art