Deluhi (stylized as DELUHI) was a Japanese visual kei [2] [3] metal band, [2] [3] formed in 2008, guitarist Leda recruited Juri as vocalist when the band Grave Seed they made was renamed. [4] Leda was previously bassist for the power metal band Galneryus, going by the name Yu-To. [5]

Deluhi was featured on the American TV show Bento Beatbox on the Anime Network on 15 April 2009. [6] In May 2009, they were included on the compilation album J-Visual[ism] 2, released by the European label CLJ Records. [7] In late 2009, Deluhi shared a national tour of Japan with Matenrou Opera. [8]

After disbandment, guitarist Leda founded Undivide [12] as his solo project, with drummer Sujk join in and vocalist Kihiro (LOKA/ ex-Supe), also Sujk started out his solo project in 2012. Undivide disbanded in March 2013.

Aggy formed a new band called Garson as vocalist with GYZE's members in April 2012. The band broke up in October of the same year, without making any releases. [13] 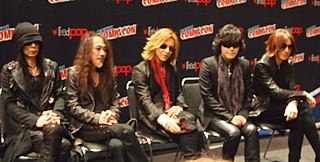 X Japan is a Japanese rock band from Chiba, formed in 1982 by drummer Yoshiki and lead vocalist Toshi. Starting as a predominantly power/speed metal band with heavy symphonic elements, they later gravitated towards a progressive sound with an emphasis on ballads. Besides being one of the first Japanese acts to achieve mainstream success while on an independent label, the group is widely credited as one of the pioneers of visual kei, a movement among Japanese musicians comparable to Western glam.

Moi dix Mois is a Japanese visual kei gothic metal band, founded in 2002 by Mana after Malice Mizer paused activities. The guitarist and sole songwriter has been the only constant member in a series of lineup changes, and the band's material is released on his own record label Midi:Nette.

Luna Sea is a Japanese rock band formed in Kanagawa Prefecture in 1989. Due to the use of make-up and costumes early in their career and their widespread popularity, they are considered one of the most successful and influential bands in the visual kei movement. Throughout the mid-1990s they used significantly less make-up, and after a one-year break in 1998, came back with a more mainstream alternative rock style and toned down their on-stage attire. When they disbanded in 2000, they left a big mark on the Japanese rock scene. In 2003, HMV Japan ranked Luna Sea at number 90 on their list of the 100 most important Japanese pop acts.

Kagrra, was a Japanese visual kei rock band. They were originally signed to the now defunct Key Party Records under the name "Crow". The group changed its name when they signed to PS Company in 2000. 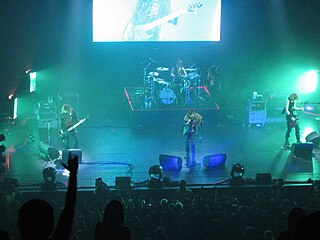 D'espairsRay was a Japanese visual kei industrial metal band active from 1999 to 2011. The lineup of Hizumi on vocals, Karyu on guitar, Zero on bass and Tsukasa on drums remained the same, with the group having released four full-length records, three EPs and thirteen singles. Outside Japan, D'espairsRay have toured Europe and North America and had domestic releases in those territories.

Vidoll was a Japanese visual kei rock band formed in 2002. Their concept was "Occult Romance". After going major, they had several top 40 singles before disbanding in 2011.

Galneryus is a Japanese power metal band, formed in Osaka in 2001 by guitarist Syu and vocalist Yama-B. Originally the only official members, the two utilized several support musicians until bassist Tsui, keyboardist Yuhki, and drummer Jun-ichi officially joined for the release of their debut album in 2003. Yama-B left the group in 2008 citing musical differences, and Yu-To, who replaced Tsui in 2006, left the following year. Galneryus recruited Sho on vocals and Taka on bass, and released the album Resurrection in 2010. The band's highest charting studio album is their eleventh, Ultimate Sacrifice, which was released in 2017 and reached number 13. In 2017, Loudwire named Galneryus one of the 10 Best Japanese Metal Bands. 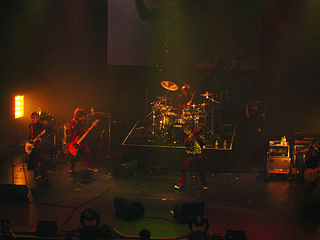 Alice Nine is a Japanese visual kei rock band formed in Tokyo in 2004. A9 was a part of PS Company until 2014. The band had King Records as its record label until 2010, when they joined Tokuma Japan. Then, in 2013, they joined Universal Music Group's Nayutawave Records.

Raphael was a Japanese visual kei rock band that formed in 1997, when the members were only 15. They disbanded in 2001, after guitarist Kazuki died at age 19. The remaining members reunited Raphael for two concerts in 2012 and for a 2016 tour.

Antic Café is a Japanese pop rock band formed in 2003 and signed to Sony Music Japan. Their visual image is oshare kei, and they describe their music as "Harajuku Dance Rock". The group has released six full-length albums, two compilation albums, and four EPs. On September 1, 2009, the band announced that after their live show on January 4, 2010 at the Nippon Budokan, they would suspend activities and put the group on hiatus, however they stated they will not disband. In 2012, after a two-year break, the team announced the resumption of activities. In June 2018, the band announced the departure of all members but Miku and a hiatus beginning in January 2019.

ayabie is a Japanese visual kei rock band signed to the label Tokuma Japan Communications. Their music consisted of a wide variety of sounds and moods, ranging from catchy and upbeat to heavy and hard-edged punk songs. Many of the band's costumes were designed by ID Japan or H. Naoto. In 2010, Kenzo, Intetsu, Yumehito and Takehito left the band because they did not share the direction taken after going major, and formed a new band also called "Ayabie", but written as "AYABIE". They are currently signed to the major company TOY'S FACTORY. Aoi remained in Tokuma Japan Communications as a solo artist, known as "Aoi from ayabie".

Shinya Yamada, better known exclusively by his stage name Shinya (真矢), is a Japanese musician, media personality and entrepreneur. He is best known as drummer of the rock band Luna Sea. Although he released one solo album in 1997, since then he has supported other bands and musicians instead.

Cascade is a Japanese visual kei rock band, with a sound not typical of others in the movement, in that it is strongly influenced by new wave music. The band formed in 1993 and disbanded in August 2002, but six years later the band reunited and released a new album in 2009, Vivo.

Lareine was a Japanese visual kei rock band formed in 1994. The band's name is reported to have come from the French Queen Marie Antoinette. In 1999 the group signed to Sony, later in 2000 when all other members left, Kamijo created Applause Records. After a number of line-up changes and the release of several albums, EPs and singles, the group disbanded in 2007.

Matenrou Opera is a Japanese visual kei power metal band. The band was formed in 2007 by Sono and Yuu who were previously the vocalist and drummer of Jeniva. 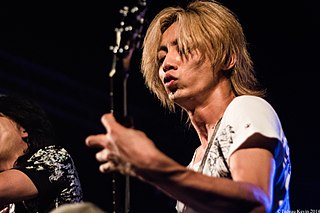 Syu is a Japanese musician, best known as leader and guitarist of the metal band Galneryus. He also performs guitar and lead vocals in Spinalcord and was formerly a member of Animetal. On September 29, 2010 he released a cover album named Crying Stars -Stand Proud!-, covering songs from Scorpions, Stratovarius, Yngwie Malmsteen, Skid Row, M.S.G., Racer X and more. It features some of his bandmates from Galneryus and Spinalcord, as well as other well-known musicians like Eizo Sakamoto (Anthem), whom Syu was in Animetal with.

D=Out is a Japanese visual kei rock band formed in 2006, previously signed to Speed Disk and Geneon Entertainment. Since 2011, they have been signed to PS Company and Tokuma Japan.

Aldious is a Japanese all-female power metal band from Osaka, formed in 2008 by guitarist Yoshi and vocalist Rami. After a few member changes, they released their debut EP Dear Slave the following year and soon after formed their own record label, Bright Star Records. A stabilized line-up including guitarist Toki, bassist Sawa and drummer Aruto was established by 2010. Their first album Deep Exceed (2010) reached the top 15 on the Oricon chart, as did their second Determination (2011). However, Rami announced she was leaving the group in June 2012 and new vocalist Re:NO joined Aldious just one month later. They produced their third album District Zero in 2013 and it became their highest-charting release to date, reaching number 7.

MAA is a Japanese recording artist, former TV host and model. Previously known as Mar, she was vocalist of the alternative rock band Marbell from 2006 to 2010. When they disbanded she embarked on a solo career, switching to pop music.