Denny Randell (born 1941) [1] is an American songwriter and record producer, who is best known for his songwriting collaborations with Sandy Linzer and Bob Crewe in the 1960s and 1970s. He co-wrote hits including "A Lover's Concerto", "Let's Hang On!", "Working My Way Back to You", and "Native New Yorker", and was nominated with Linzer for induction into the Songwriters Hall of Fame (SHOF) in 2012. [2]

He was born in New York City and later moved to Silver Spring, Maryland. He played piano and accordion, and performed in various local bands in his teens, as well as starting to write songs. One of his songs came to the attention of New York music publishing company Shapiro Bernstein, who started to employ him as a staff songwriter. This in turn led to his introduction to Bob Gaudio and Bob Crewe, the record producers and writers behind the success of The Four Seasons. Randell began working for the Four Seasons as a writer and arranger in the early 1960s. [3]

Gaudio's associate, Al Kasha, introduced Randell to lyricist Sandy Linzer. The duo wrote several Top 10 songs for Frankie Valli and The Four Seasons, including "Working My Way Back to You" (also a hit for The Spinners in 1979, and in Ireland for Boyzone in 1994), "Opus 17 (Don't You Worry 'Bout Me)", and, with Bob Crewe, "Let's Hang On!". Randell and Crewe later co-wrote Valli's solo hit "Swearin' To God".

In 1965, Randell and Linzer wrote and produced most of the songs for the R&B girl group, The Toys, including their singles "A Lover's Concerto" (adapted from Minuet in G major , a classical music piece), and "Attack!" Another Toys recording written by the duo, "Can't Get Enough Of You Baby", was later covered by the garage band ? and the Mysterians and, in 1998, was a #14 hit when covered by Smash Mouth. They also had a hit with Jay and the Techniques' "Keep the Ball Rollin'".

Linzer and Randell wrote two songs recorded by The Monkees, "I'll Be Back Up On My Feet" and "The Day We Fall in Love", and "Penny Arcade" by The Cyrkle. They later wrote "Native New Yorker", performed by Odyssey on the soundtrack of the film Eyes of Laura Mars ; it was later featured in the film The Nanny Diaries and the final year of HBO’s Sex and the City . Other co-writes include "Breakin' Down The Walls Of Heartache", a major UK hit in 1968 for Johnny Johnson and the Bandwagon, and Samantha Sang's 1978 chart hit "You Keep Me Dancin'".

In the late 1960s and early 1970s, Randell worked in A&R for several companies, including Epic, RCA, and Frank Zappa's DiscReet Records, for whom he produced Tim Buckley's album Sefronia . He also produced the Iron Butterfly album Scorching Beauty . Later in the decade, he co-wrote and arranged the album Get Dancin’ by Disco Tex and the Sex-O-Lettes. In 1980 he co-wrote the Star Wars -themed album Christmas in the Stars , which featured singer John Bongiovi (later Jon Bon Jovi). [4]

In 1985, he teamed up with songwriter and singer Biddy Schippers and formed the duo Randell & Schippers, who recorded a number of successful electronic dance tracks including Alice in Wonderland. The pair later married. In recent years they have worked together on the GI Jams project, which aims to develop and spotlight songwriting talents in the U.S. military. [3] 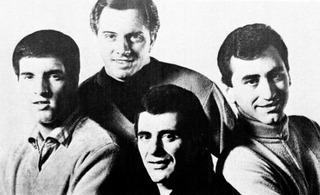 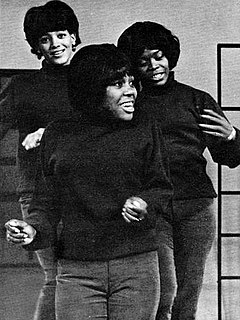 The Toys were an American pop girl group from Jamaica, New York, which was formed in 1961 and disbanded in 1968. Their most successful recording was "A Lover's Concerto" (1965), which sold more than two million copies and reached the number-two spot on the Billboard Hot 100 chart.

Sandy Linzer is an American songwriter, lyricist, and record producer, who is best known for his songwriting collaborations with Denny Randell and Bob Crewe in the 1960s and 1970s. He co-wrote hits including "A Lover's Concerto", "Let's Hang On!", "Working My Way Back to You", "Breakin' Down The Walls Of Heartache", "Native New Yorker", and "Use It Up and Wear It Out". He was nominated with Randell for induction into the Songwriters Hall of Fame (SHOF) in 2012. 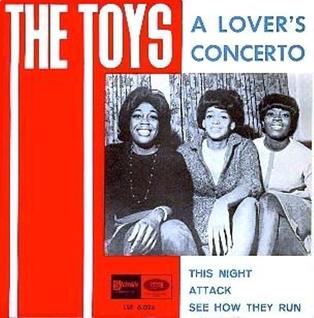 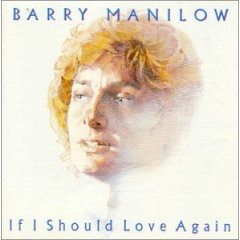 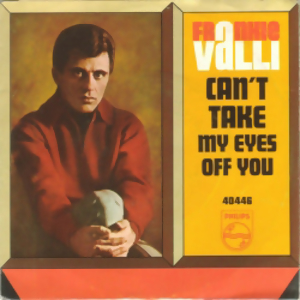 "Can't Take My Eyes Off You" is a 1967 song written by Bob Crewe and Bob Gaudio. It was recorded as a single by Frankie Valli. The song was among his biggest hits, earning a gold record and reaching No. 2 on the Billboard Hot 100 for a week, stuck behind "Windy" by the Association. Gaudio was a bandmate of Valli's in the Four Seasons. It was Valli's biggest solo hit until he hit No. 1 in 1975 with "My Eyes Adored You".

Kenny Nolan is an American singer-songwriter from Los Angeles.

Tonin' is a studio album by The Manhattan Transfer. It was released in 1995 on Atlantic Records. The expression "tonin'" is associated with the vocal groups of the 1950s and 1960s. The songs on this album are favorites of the band's from that era. Singer-songwriter Laura Nyro makes one of her last performances on this recording.

"Let's Hang On!" is a song composed by Bob Crewe, Sandy Linzer, and Denny Randell that was popularized by The Four Seasons in 1965. The single reached the No. 3 position in the Billboard Hot 100 singles chart, the group's highest placement since "Rag Doll" hit the top spot in July 1964. 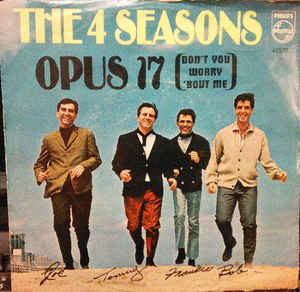 "Opus 17 " is a song composed by Sandy Linzer and Denny Randell and recorded by The Four Seasons in 1966 for their album Working My Way Back to You. The song was released as the official follow-up to the title song of the album and reached the #13 position on the Billboard Hot 100 singles chart. 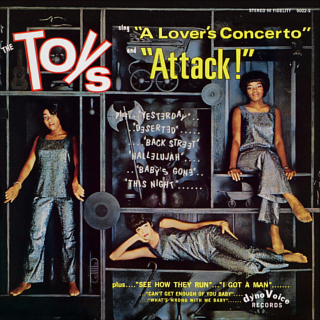 The Toys Sing “A Lover's Concerto” and “Attack!” was the sole album of the girl group The Toys. It was released in 1966 right after the success of the group's first two hits, both of which are mentioned in the album's title.

The Four Seasons Story is a two-record compilation of The Four Seasons's biggest hit singles from 1962 to 1970. It was released in 1975 on the Private Stock label. It quickly became a gold record, selling over one million copies before the RIAA started awarding platinum records for million-selling albums (1976). 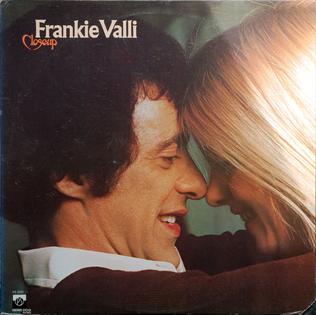 Closeup is an album by Frankie Valli, released in February 1975 on the Private Stock label. It had been seven years since his prior album, and afforded Valli his first of two number-one solo hits in the US. The LP reached #51 on the U.S. Billboard albums chart.

Lady Put the Light Out is an album by Frankie Valli, released in November 1977 on the Private Stock label.