He studied in his hometown, where he also joined the Society of Jesus. He came to Chile in the year 1629, without having taken his last vows still being sent to the residence that the Jesuits had in Arauco. He served as an Army chaplain in the Arauco War during the government of Don Francisco Laso de la Vega and in 1640 was ordained a priest in Santiago. During this time he acquired his knowledge of the language and customs of the Mapuche.

He was close to the governors Francisco López de Zúñiga and Martín de Mujica y Buitrón, accompanying them and participating in the parliaments held in 1641 and 1647 during the Arauco War.

In 1650, the Governor Antonio de Acuña Cabrera tasked him to conduct a journey to the Pehuenche tribes east of Villarica and later to Lake Nahuelhuapi. During the Mapuche uprising of 1655 he was in Boroa, long besieged by the Mapuche until January 1656, when it was abandoned. He was taken to Concepción and appointed rector of the Jesuit college in the city, where he stayed until 1662. He was then appointed superior of the Jesuit Province of Chile, having moved to Santiago. He held this office until 1666, and then assumed the rectorship of the Colegio Máximo of the order in the capital. He took up the direction of the Jesuits again between 1670 and 1672.

Work as a chronicler

In 1674 he finished writing his Historia General del Reino de Chile. His first two books describe the geography, fauna, flora, and the life and customs of the natives. The second part deals with the history of the Kingdom from the arrival of Diego de Almagro until the General Rising of 1655. However it was not published until 1877 in Valparaiso, due to Benjamín Vicuña Mackenna, who acquired it in 1870 in London.

Diego de Rosales Historia documents a series of events such as the Dutch expedition to Valdivia. [2]

Diego de Rosales is also known to have written a chronicle about the Society of Jesus in Chile, which was called Conquista Espiritual del reino de Chile. It was a series of biographies of the main missionaries of the order, combined with the descriptions of their personalities with tales of miracles, appearances and all sorts of wonders common in the minds and documents of the time. Unfortunately, this manuscript has only survived in part.

In his works Rosales used chiefly second hand sources such as those of Garcilaso de la Vega. [3] Comparison to other written work have shown that Rosales writings are prone to errors and exaggerations. [3]

Boroa, is a town in Araucanía, Chile on the shores of Cautín River. The region near the town south of the Cautin River between the Boroa and Quepe Rivers was the Moluche aillarehue of Boroa. The site of the town was founded as a Spanish fort San Ignacio de la Redención in 1606 by Maestro de Campo Rodulfo Lisperger during the Arauco War but it did not remain long after he and his garrison were ambushed. Later in 1649 as a result of the Parliament of Quillín (1647), Martín de Mujica y Buitrón was able to reestablish the fort at Boroa but it was abandoned in 1656 after a long siege during the Mapuche uprising of 1655. One could still find vestiges of the old Spanish fort near the mission at its location at the end of the 19th century.

Cayancura, or Cayeucura, was a Mapuche leader native to the region of Marigüenu, chosen as toqui in 1584 to replace the captured Paineñamcu. His one great operation was an attempted siege of the fort at Arauco that failed, leading to his abdication of his office in favor of his son Nangoniel in 1585. 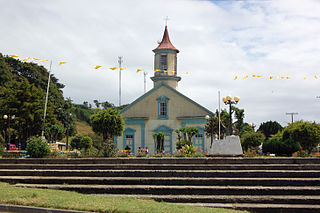 Carelmapu is a port and town at the western end of Chacao Channel, southern Chile. Carelmapu was established by the Spanish in 1602 as San Antonio Ribera de Carelmapu following the Destruction of Seven Cities. In 1643 Carealmapu was sacked and its church vandalized by the Dutch corsair Hendrick Brouwer. On March 6, 1676 Carelmapu received the exhausted survivors of Pascual de Iriarte's expedition to the Strait of Magellan.

Juan Moscoso was a Chilean criollo Jesuit. He was fluent in Spanish and Mapudungun. Together with fellow Jesuit Diego de Rosales Moscoso dissuaded governor Governor of Chile Antonio de Acuña Cabrera to launch new punitive expeditions against the Cunco in 1653. They argued that the murders were committed by a few Indians and warned the governor that renewing warfare would evaporate gains obtained at Boroa.