Echo Burning is the fifth novel in the Jack Reacher series written by Lee Child. It was published in 2001 by Putnam in America and Bantam in the United Kingdom. It is written in the third person.

Jack Reacher breaks a bully's nose and finger after being repeatedly provoked in a Texas saloon, so when the bully turns out to be a local cop and shows up with three of his colleagues the following day to arrest him, Reacher decides it's time to move on. He chooses hitchhiking as the fastest escape and hooks up with a driver of Mexican heritage named Carmen Greer. She says that the only reason she stopped, however, is because she has a problem: Her tax-evading husband, Sloop, is coming out of prison soon, and he will inevitably continue beating her as he did so many times before, especially because he knows she was the one who informed on him. Carmen has been diligently searching for candidates to kill him, and she thinks Reacher's military background may qualify him for the job. Reacher initially refuses and even leaps out of the car and back into the sweltering 110-degree (Fahrenheit) heat, but then he expeditiously changes his mind and agrees to accept a ride back to her ranch. It is there that Carmen, her husband Sloop and the rest of his family live, and Reacher is promising nothing more than to look into the situation and, if necessary, to act as her bodyguard. Carmen and Jack then proceed to pick up her daughter Ellie, who gets on well with Reacher.

Meanwhile, two other groups are introduced: a group of watchers, composed of two men and a boy who have been staking out the ranch, and a trio of hitmen (two men and one woman) who subsequently kill the first group on the orders of their mutual employer after murdering Al Eugene, the lawyer who had secured Sloop's release.

Carmen and Reacher arrive back at the ranch, but Reacher does not receive a warm welcome from Sloop's bigoted mother, brother, or the two ranchers who work there. Reacher gets the Greers to hire him as a wrangler, and teaches Carmen how to handle a firearm. The family orders the other ranchers to dispose of Reacher; he subdues them and returns unharmed. Sloop then arrives, and claims Jack is trespassing; he is arrested and removed by Texas Rangers.

En route, the rangers are called back: Sloop has been shot and killed, and the authorities charge Carmen with the murder after finding a gun. Furthermore, while she is incarcerated, she suddenly confesses to the murder and assiduously denies legal help from Alice Amanda Aaron, the pro bono attorney whom Reacher procures for her.

Assisted by Hack Walker, the Pecos County district attorney and an old friend of Sloop's, Jack and Alice discover a cover-up related to the murder of several illegal immigrants by Hack, Sloop, and Eugene. Reacher concludes that Hack orchestrated the murders in order to protect his election chances, and that he is pressuring Carmen to confess by threatening Ellie's life. Reacher kills two of the hitmen in an ambush and confronts Hack at the ranch, whereupon Sloop's mother kills him as a fire breaks out and burns down their house. After tracking down and subduing the third man at a motel, preventing him from killing Ellie, Reacher leaves Carmen to start a new life as he prepares to look for a ride out of Texas.

Child finished writing Echo Burning in March 2000. The book was released in the United Kingdom and its territories on 2 April 2001, and the American publication followed on 25 June of the same year. [1]

The original idea for Echo Burning came from two sources. The first was an idea he had in which he wondered what it would be like for a woman whose husband was returning home from jail, but didn't want him to return. He also took inspiration from seeing the grave of the gunfighter Clay Allison who "never killed a man that did not need killing." He wondered what it would be like if Reacher was confronted by a man he had been told needed killing. [2]

Child wanted Carmen Greer to appear as a character whom readers would not know whether or not to trust. He has also said how he wanted Alice Amanda Aaron, the Harvard educated, vegetarian, lesbian, attorney Reacher hires, to be a reflection of how diverse America is; he can be quoted as saying "she's totally normal in New York, but a freak in Texas." [2] 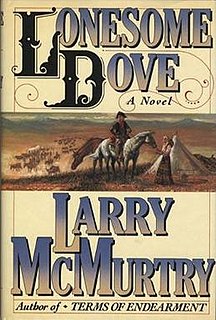 Jack Reacher is a fictional character and the protagonist of a series of crime thriller novels by British author Lee Child. After leaving the US Army as a major in its military police at age 36, Reacher roams the United States taking odd jobs and investigating suspicious and frequently dangerous situations. As of 27 October 2020, 25 novels have been published, the most recent being The Sentinel. The character has also appeared in short stories, and two of the novels have been adapted into successful action thriller films, starring Tom Cruise as Reacher. 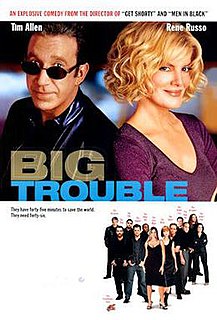 Big Trouble is a 2002 American comedy film based on the novel Big Trouble by Dave Barry. It was directed by Barry Sonnenfeld and featured a large cast including Tim Allen, Rene Russo, Dennis Farina, Zooey Deschanel, Sofia Vergara and Jason Lee. Like much of Dave Barry's fiction, it follows a diverse group of people through a series of extremely strange and humorous situations against the backdrop of Miami. The film was a box office and critical bomb.

Tekken: The Motion Picture is an anime adaptation of the Tekken fighting video game series by Namco. Produced by ASCII Corporation and Sony Music Entertainment Japan and animated by Studio Deen, it was originally released in Japan as a two-episode OVA in 1998, and as a full-length feature for Western releases.

James Brass is a fictional character from the CBS crime drama CSI: Crime Scene Investigation, portrayed by Paul Guilfoyle. He made his first screen appearance in the show's pilot, broadcast on October 6, 2000. He was credited in 317 episodes. Guilfoyle's departure was announced in March 2014 and his character left on May 7, 2014. 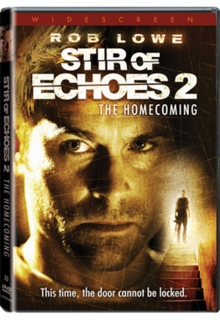 Stir of Echoes: The Homecoming is a 2007 American made-for-television supernatural horror film produced by Lions Gate Entertainment. The film premiered on the Sci Fi Channel. Originally titled The Dead Speak, it was written and directed by Ernie Barbarash and is a sequel to the 1999 feature film Stir of Echoes, although its only connection to the previous work is the inclusion of Jake Witzky, who had a key role in the original film but is only a secondary character here.

Eleanor "Miss Ellie" Ewing Farlow is a fictional character from the primetime CBS television series Dallas, a long-running serial centered on the lives of the wealthy Ewing family of Dallas, Texas. Created by writer David Jacobs, the character of family matriarch Miss Ellie was an important part of the show's structure and conflict. The dynamic role was originated by stage and screen actress Barbara Bel Geddes who was awarded both the Emmy Award and Golden Globe award for Outstanding Lead Actress In A Drama Series.

Clayton Farlow is a fictional character in the popular American television series Dallas, played by Howard Keel from 1981 to 1991. 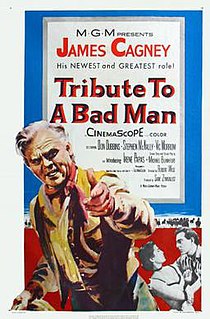 Tribute to a Bad Man is a 1956 western film directed by Robert Wise and starring James Cagney about a rancher whose harsh enforcement of frontier justice alienates the woman he loves. It was based on the short story "Hanging's for the Lucky" by Jack Schaefer, the author of Shane. 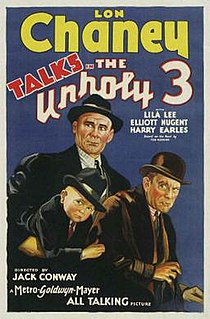 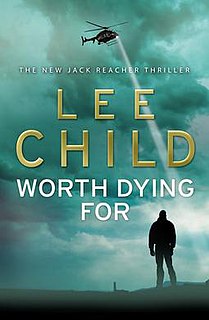 Bedlam is a British supernatural drama television series created by David Allison, Neil Jones, and Chris Parker. It was first broadcast on 7 February 2011 on Sky Living and Sky Living HD. The series finale was broadcast on 15 March 2011. In December 2011, it was announced that a second series had been commissioned for broadcasting in early 2012, with an updated cast. Series two was broadcast from June 2012 with Lacey Turner taking the lead as a suspended paramedic who can see dead people. 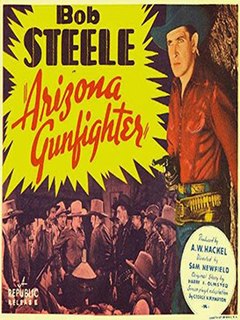 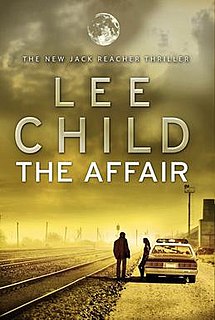 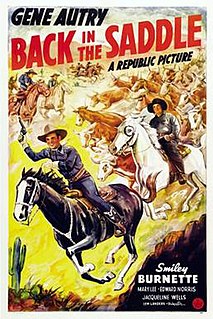 Back in the Saddle is a 1941 American Western film directed by Lew Landers and starring Gene Autry, Smiley Burnette, and Mary Lee. Written by Richard Murphy and Jesse Lasky Jr., the film is about a singing cowboy who attempts to bring peace between ranchers and the operator of a copper mine whose chemicals are poisoning the area's water supply. The film features several of Autry's hit songs, including "Back in the Saddle", "I'm An Old Cowhand", and "You Are My Sunshine". 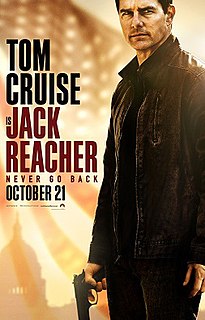 Jack Reacher: Never Go Back is a 2016 American action thriller film directed by Edward Zwick and written by Zwick, Richard Wenk and Marshall Herskovitz, and based on the 2013 novel Never Go Back by Lee Child. A sequel to the 2012 film Jack Reacher, the film stars Tom Cruise and Cobie Smulders with supporting roles by Patrick Heusinger, Aldis Hodge, Danika Yarosh, Holt McCallany, and Robert Knepper. The plot follows Reacher going on the run with an Army major who has been framed for espionage, as the two reveal a dark conspiracy.

The Thinning: New World Order is a 2018 American social science fiction thriller web film and the sequel to the 2016 film The Thinning. As with the first film, the movie was directed by Michael J. Gallagher and stars Logan Paul as a young man struggling against a dystopian future in which population control is enforced through a school aptitude test. The film released to YouTube Premium after being briefly shelved due to controversies surrounding its star, Logan Paul.

Past Tense is a novel by British writer Lee Child.This is the twenty-third book in the Jack Reacher series. Delacorte Press initially released the book on 5 November 2018. 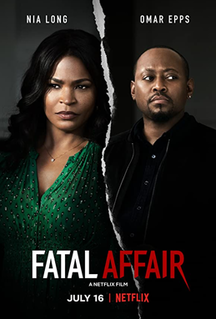