The Midnight Line is a novel by British writer Lee Child. [1] This is the twenty-second book in the Jack Reacher series. [2] The book was released on 7 November 2017. The plot finds Reacher once again in the Midwest, this time being thrust into an investigation involving the illegal opioid trade, the pharmaceutical companies that often turn a blind eye in the name of profits, and the people dependent on them.

After spending the night with a woman named Michelle Chang (from Make Me), Jack Reacher is traveling through Wisconsin when he happens to stop at a pawnshop selling an unusual item: a 2005 West Point class ring. Unwilling to accept that such a priceless thing would be willingly sold, Jack suspects it to be stolen and decides against leaving town. He questions the pawnbroker and learns that the ring was sold to him by a biker named Jimmy Rat. Reacher beats up Rat's gang and learns that the ring originally belonged to a fence named Arthur Scorpio, who runs a laundromat in Rapid City, South Dakota. Reacher leaves town, aware that Rat has already warned Scorpio of his plans.

In Rapid City, Reacher encounters two other people with an interest in Scorpio: Gloria Nakamura, a detective who has tried and failed for years to find incriminating evidence of Scorpio's criminal enterprise, and Terrence Bramall, a private investigator hired by Tiffany Jane Mackenzie, a woman searching for her missing twin sister Serena Rose Sanderson, who Reacher learns, through a sympathetic general at West Point, is the owner of the ring. Reacher allows himself to be picked up by Scorpio's men and then subdues them in less than three seconds. In turn, Scorpio provides him with the name of Seymour Porterfield, the man who originally gave him the ring, but secretly instructs an associate of his, Billy, to kill Reacher before he finds Seymour.

Reacher travels to Mule Crossing, a rural town in Wyoming, where Porterfield last lived. A local shopkeep reveals that Sy has been dead for well over a year, supposedly killed by a wild bear. Bramall runs into Reacher at Billy's house, and the two agree to partner up, at least temporarily. They search Sy's house, and find evidence that a woman was living with him. Mackenzie shows up, having grown impatient with Bramall's lack of results, and Reacher reveals his growing suspicion that both Rose and Sy were involved with the illegal opioid trade, which is subsequently confirmed by Kirk Noble, a DEA agent who asks Reacher to keep him informed if he finds Rose or Billy.

While looking for a new lead on Rose's location, three junkies try to scare the group off, but Reacher intimidates them into leaving. The men turn out to be friends of Rose, and when Reacher convinces them that they mean no harm, they are taken to see Rose, who has been in hiding since an IED in Afghanistan shredded her face, leaving her disfigured and in constant pain, making her dependent on opioids. Fearing that her sister will die, Mackenzie formulates a plan to move her to her home in Illinois, where her addiction can be treated in secret. Before they can leave, Stackley, a dealer who has taken over Billy's operation following the latter's disappearance, bribes the junkies to kill Reacher. One is accidentally shot and dies, and Reacher forces the others to lure Stackley into a trap; Rose manages to kill him with a rifle.

As Rose will likely die without a new supply of opioids, Reacher, Bramall, and Mackenzie steal what she needs from Stackley's suppliers, and Reacher cuts a deal with Noble to protect Rose from having to testify against the dealers on the DEA's behalf. Nakamura attempts to arrest Scorpio, who she realizes is the head of the operation, but he chains her to a table. Reacher then confronts Scorpio and stuffs him in a mechanical dryer, while the DEA receives sufficient information to arrest a Col. Bateman, a corrupt Marine officer who had framed Seymour (driving him to commit suicide) for trying to expose his theft of military opioid supplies for resale to Scorpio.

Reacher returns Rose's ring to her, and she promises to get clean before she, Bramall, and Mackenzie drive off. Reacher then hitches another ride out of South Dakota, heading towards Kansas. 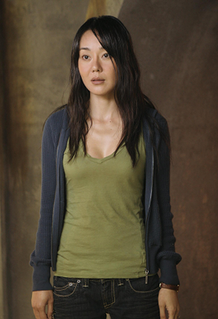 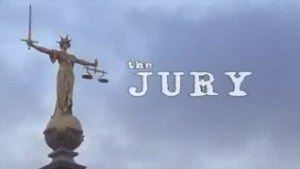 The Jury is a British television serial broadcast in 2002. The series was the first ever to be allowed to film inside the historic Old Bailey courthouse.

"The Ring" is episode 16 of season 1 in the television show Angel. Written by Howard Gordon and directed by Nick Marck, it was originally broadcast on February 29, 2000 on the WB television network. It was nominated for an Emmy Award for Outstanding Makeup for a Series. In this episode, Angel is captured and enslaved in a fighting club, and must fight his way to freedom, or rely on Cordelia Chase and Wesley Wyndam-Pryce to save him.

Magyk is a fantasy novel written by English author Angie Sage. It is the first book in the seven-book Septimus Heap series. The sequel, Flyte was released in March 2006, Physik in March 2007, Queste in 2008, Syren in September 2009, Darke in July 2011, and Fyre in 2013. The book cover of Magyk alludes to the diary that the ExtraOrdinary Wizard Marcia makes for her apprentice, Septimus Heap. The cover also depicts Septimus's Dragon Ring, rendered as if it were sitting atop the diary. 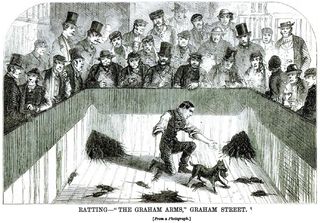 Rat-baiting is a blood sport, which involves placing captured rats in a sunken pit or other enclosed area surrounded by spectators, and then betting on how long a dog, usually a terrier, takes to kill them by taking rats in its mouth and shaking them to death. Often, two dogs competed, with the winner receiving a cash prize. It is now illegal in most countries.

Jack Osbourne: Adrenaline Junkie is a British reality television series on ITV2, series 1 focused on Jack Osbourne's globe-trekking six-month quest to get in physical and mental shape to climb the rockface of California's El Capitan mountain, the show documents Osbourne running with the bulls in Pamplona, Spain, following a strict exercise regimen, Muay Thai training in Thailand, and "an overall 180-degree mental make-over". 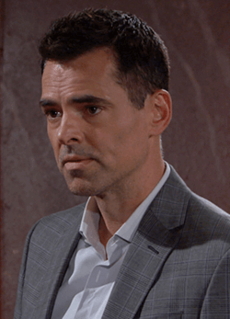 Billy Abbott is a fictional character from The Young and the Restless, an American soap opera on the CBS network. Created by William J. Bell as the son of John Abbott and Jill Abbott, the character is currently portrayed by Jason Thompson. He was born onscreen during the episode airing on July 7, 1993. For the character's first six-year period, he appeared as a minor, portrayed by various child actors. In 1999, David Tom began portraying Billy as a teenager. Tom was acclaimed for his portrayal, winning a Daytime Emmy Award in 2000. 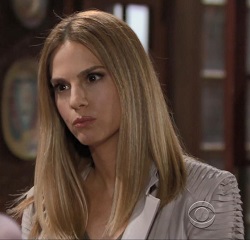 Mackenzie Browning is a fictional character from the CBS soap opera The Young and the Restless. The role was most recently portrayed by Kelly Kruger, who portrayed the role from February 19, 2002, to July 1, 2003, and from March 28, 2018, to January 11, 2019. Previously, the role was portrayed by Ashley Bashioum, Nicole Tarantini, Rachel Kimsey and Clementine Ford. 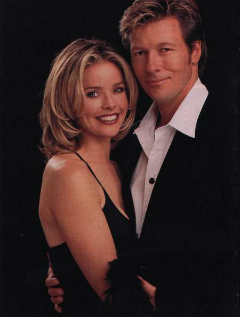 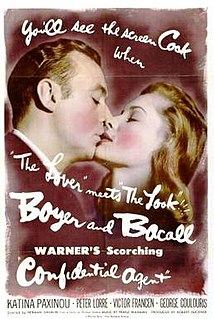 Confidential Agent is a 1945 American spy film starring Charles Boyer and Lauren Bacall which was a Warner Brothers production. The movie was directed by Herman Shumlin and produced by Robert Buckner with Jack L. Warner as executive producer. The screenplay was by Robert Buckner, based on the 1939 novel The Confidential Agent by Graham Greene. The music score was by Franz Waxman and the cinematography by James Wong Howe. The supporting cast includes George Coulouris and Peter Lorre.

The Midnight Man is a 1919 American film serial directed by James W. Horne. It is now considered to be a lost film.

Tales of Wrykyn and Elsewhere is a collection of short stories by British writer P. G. Wodehouse, first published on 1 October 1997 by Porpoise Books, London, with illustrations by T. M. R. Whitwell. It contains previously uncollected work, most of the stories having first appeared in the schoolboy's magazines such as The Captain and Public School Magazine. It was reprinted by Penguin Random House under its Everyman's Library imprint in 2014.

Alice is a 2009 television miniseries that was originally broadcast on Canadian cable television channel Showcase and an hour later on American cable television channel Syfy. The miniseries is a reimagining of the classic Lewis Carroll novels Alice's Adventures in Wonderland (1865) and Through the Looking-Glass (1871), taking place about 150 years later with science fiction and additional fantasy elements added. The miniseries, produced by Reunion Pictures is three hours long, split into two parts, which premiered on Sunday, December 6, 2009, and Monday, December 7, 2009, respectively. Writer and director Nick Willing previously directed a 1999 adaptation of the books that followed the story more closely; however, Alice is intended to be a modern interpretation, imagining how Wonderland might have evolved over the last 143 years. The mini-series was partially shot in the Kamloops, B.C., Canada area.

Prince of Scorpio is a science fiction novel written by Kenneth Bulmer under the pseudonym of Alan Burt Akers. It is the fifth book in his extensive Dray Prescot series of sword and planet novels, set on the fictional world of Kregen, a planet of the Antares star system in the constellation of Scorpio. It was first published by DAW Books in 1974.

The Wicked Will Rise is a young adult novel by Danielle Paige, and the sequel to the 2014 book Dorothy Must Die. It was published by HarperCollins on March 30, 2015. It continues the story of high school girl Amy Gumm in her mission to assassinate Dorothy Gale, who has become twisted and evil.

Dead 7 is an American post-apocalyptic zombie horror western film written by Nick Carter, American singer best known as a member of the Backstreet Boys. It is directed by Danny Roew and produced by The Asylum. The movie aired on SyFy on April 1, 2016 in the United States. Carter managed to get two of his bandmates, A. J. McLean and Howie Dorough to star in the movie. In addition, Carter also cast several members from other boy bands like 98 Degrees, O-Town, 'N Sync and All-4-One. A free copy of the theme song "In the End" was released on March 28, performed by band members Nick Carter, AJ McLean and Howie D.; Joey Fatone and Chris Kirkpatrick from NSYNC; Jeff Timmons from 98 Degrees; and Erik-Michael Estrada from O-Town.

Lake Placid: Legacy is a 2018 American-South African made-for-television horror film directed by Darrell Roodt and stars Katherine Barrell, Tim Rozon, Sai Bennett and Joe Pantoliano. It premiered on Syfy on May 28, 2018 and is the sixth and final installment in the Lake Placid series, which is also considered a reboot. The film is its own story that tells along with the origin story of how the crocodiles got to be in Lake Placid.