Dell Publishing is an American publisher of books, magazines and comic books, that was founded in 1921 by George T. Delacorte Jr. with $10,000, two employees and one magazine title, I Confess, and soon began turning out dozens of pulp magazines, which included penny-a-word detective stories, articles about films, and romance books (or "smoochies" as they were known in the slang of the day).

During the 1920s, 1930s and 1940s, Dell was one of the largest publishers of magazines, including pulp magazines. Their line of humor magazines included 1000 Jokes , launched in 1938. From 1929 to 1974, they published comics under the Dell Comics line, the bulk of which (1938–68) was done in partnership with Western Publishing. In 1943, Dell entered into paperback book publishing with Dell Paperbacks. They also used the book imprints of Dial Press , Delacorte Books, Delacorte Press, Yearling Books, and Laurel Leaf Library.

Dell's earliest venture into paperback publishing began because of its close association with Western Publishing. William Lyles wrote, "Dell needed paper, which Western had in 1942, and because Western by this time needed printing work, which Dell could supply in the form of its new paperback line. So Dell Books was born, created by Delacorte of Dell and Lloyd E. Smith of Western." [1]

Dell began publishing paperbacks in 1942 at a time when mass-market paperbacks were a relatively new idea for the United States market—its principal competitor, Pocket Books, had only been publishing since 1939. An examination of paperback books available at this time shows no consensus on standardization of any feature; each early company was attempting to distinguish itself from its competitors. Lyles commented, "Dell achieved more variety than any of its early competitors. It did so, at first, with an instantly identifiable format of vibrant airbrushed covers for its predominantly genre fiction, varying 'eye-in-keyhole' logos, maps on the back covers, lists of the books' characters, and 'tantalizer-pages'. The design was merchandising genius; it successfully attracted buyers, it sold books." [1]

The first four books did not feature maps on the back cover; this began with Dell #5, Four Frightened Women by George Harmon Coxe. (A later re-issue of Dell #4, The American Gun Mystery by Ellery Queen, added a map.) The map was meant as an aid to the reader, to show the location of the principal activity of the novel. Some were incredibly detailed; others somewhat stylized and abstract. The books were almost immediately known as "mapbacks", and that nomenclature has lasted among collectors to this day. [2] The maps were "delicate and detailed". [3]

The novels in the mapback series were primarily mysteries/detective fiction but ran the gamut from romances (Self-Made Woman by Faith Baldwin, #163) to science fiction ( The First Men in the Moon by H.G. Wells, #201), war books (I Was A Nazi Flyer by Gottfried Leske, #21 and Eisenhower Was My Boss by Kay Summersby, #286), many Westerns (Gunsmoke and Trail Dust by Bliss Lomax, #271), joke books (Liberty Laughs, Cavanah & Weir, #38) and even crossword puzzles (Second Dell Book of Crossword Puzzles, ed. Kathleen Rafferty, #278, one of the rarest titles today). There were a few movie tie-in editions ( The Harvey Girls by Samuel Hopkins Adams, #130, and Rope as by Alfred Hitchcock, #262) and the occasional attempt at more artistic non-genre fiction ( To A God Unknown by John Steinbeck, #407). Novels which are today long forgotten, by largely unknown authors (Death Wears A White Gardenia, by Zelda Popkin, #13) are in the same series as valuable original paperback editions of famous authors (A Man Called Spade, by Dashiell Hammett, #90). "The back cover map was very popular with readers and remains popular with collectors... the Dell "mapbacks" are among the most well-known vintage paperbacks." [2]

In the early 1950s, as series numbering reached the 400s, Dell began updating the appearance of its books. In 1951, the back cover maps began to be gradually replaced with conventional text and "blurb" covers. [2] Some later, more stylized maps were the product of Milton Glaser and Push Pin Studios. These innovations were brought in by editor-in-chief Frank Taylor. He introduced classics in paperback form under the umbrella imprint "Laurel Editions" which included Henry James and a poetry series edited by the distinguished poet Richard Wilbur.

At about this time, Dell launched two short-lived experiments which are also considered very collectible, Dell First Editions and Dell Ten Cent Books. The Ten Cent Books, 36 in all, were thin, paperback-sized editions containing a single short story told in only 64 pages (advertised as "too short for popular reprint at a higher price"), such as Robert A. Heinlein's Universe (1951).

In 1947, Dell published two unnumbered paperbacks based on newspaper comic strips, Blondie and Dagwood in Footlight Folly and Dick Tracy and the Woo Woo Sisters. Both are popular with collectors today. [2]

Dell was also the publisher between 1982 and 1987 of the series Twilight: Where Darkness Begins .

Dell Magazines was sold in 1997, and it still exists as a major publisher of puzzle magazines, also publishing science fiction, mystery and horoscope magazines.

A paperback, also known as a softcover or softback, is a type of book characterized by a thick paper or paperboard cover, and often held together with glue rather than stitches or staples. In contrast, hardcover or hardback books are bound with cardboard covered with cloth, plastic, or leather. The pages on the inside are made of paper. 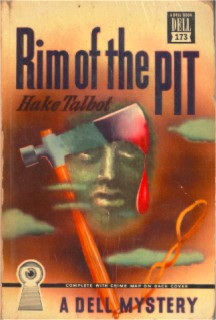 Mapback is a term used by paperback collectors to refer to the earliest paperback books published by Dell Books, beginning in 1943. The books are known as mapbacks because the back cover of the book contains a map that illustrates the location of the action. Dell books were numbered in series. Mapbacks extend from #5 to at least #550; then maps became less of a fixed feature of the books and disappeared entirely in 1951. The occasional number in the series between #5 and #550 contains no map, but some sort of full-page graphic or text connected with the book's contents. 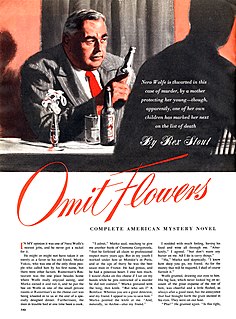 "Omit Flowers" is a Nero Wolfe mystery novella by Rex Stout, first published in the November 1948 issue of The American Magazine. It first appeared in book form in the short-story collection Three Doors to Death, published by the Viking Press in 1950.