Plume is a publishing company in the United States, founded in 1970 as the trade paperback imprint of New American Library. Today it is a division of Penguin Group, with a backlist of approximately 700 titles. [1]

The Black Arrow: A Tale of the Two Roses is an 1888 novel by Robert Louis Stevenson. It is both a historical adventure novel and a romance novel. It first appeared as a serial in 1883 with the subtitle "A Tale of Tunstall Forest" beginning in Young Folks; A Boys' and Girls' Paper of Instructive and Entertaining Literature, vol. XXII, no. 656 and ending in vol. XXIII, no. 672 —Stevenson had finished writing it by the end of summer. It was printed under the pseudonym Captain George North. He alludes to the time gap between the serialisation and the publication as one volume in 1888 in his preface "Critic [parodying Dickens's 'Cricket'] on the Hearth": "The tale was written years ago for a particular audience..." The Paston Letters were Stevenson's main literary source for The Black Arrow. The Black Arrow consists of 79,926 words. 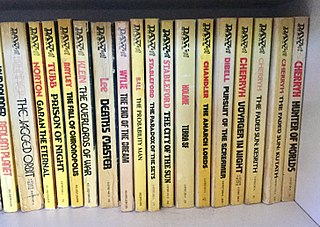 DAW Books is an American science fiction and fantasy publisher, founded by Donald A. Wollheim, along with his wife, Elsie B. Wollheim, following his departure from Ace Books in 1971. The company claims to be "the first publishing company ever devoted exclusively to science fiction and fantasy." The first DAW Book published was the 1972 short story collection Spell of the Witch World by Andre Norton.

E. P. Dutton was an American book publishing company. It was founded as a book retailer in Boston, Massachusetts, in 1852 by Edward Payson Dutton. Since 1986, it has been an imprint of Penguin Group.

Frigid Hare is a Warner Bros. Merrie Melodies short, released on October 8, 1949. It is directed by Chuck Jones and written by Michael Maltese, and features Bugs Bunny. The title can be seen as a simple play on "frigid air" and/or on the refrigerator brand called "Frigidaire".

Nessim Joseph Dawood was an Iraqi Jewish translator, who is best known for his translation of the Quran.

Riverhead Books is an imprint of Penguin Group (USA) founded in 1994 by Susan Petersen Kennedy.

Sentinel was established in 2003 as a dedicated conservative imprint within Penguin Group (USA). It publishes a wide variety of right-of-center books on subjects like politics, history, public policy, culture, religion and international relations. Its most notable books include Donald Rumsfeld’s memoir, Known and Unknown, Mike Huckabee’s Do the Right Thing, A Simple Christmas, and A Simple Government, and A Patriot’s History of the United States by Larry Schweikart.

Alpha Books, a member of Penguin Random House, is an American publisher best known for its Complete Idiot's Guides series. It began as a division of Macmillan. Pearson Education acquired Macmillan General Reference from Simon & Schuster in 1999. Alpha moved from Pearson Education to Penguin Group in 2003. Alpha became part of sister company DK in 2012.

Philomel Books is a children's literature imprint of Penguin Books USA. The imprint was founded by Ann Beneduce, who was succeeded as publisher by Patricia Lee Gauch.

Avery Publishing is a book publishing imprint of the Penguin Group, founded as an independent publisher in 1976 by Rudy Shur and partners, and purchased by Penguin in 1999. The current president is veteran publisher William Shinker. Their offices were located at one time in Garden City, New York, home to other publisher's offices.

Gone 'Til November: A Journal of Rikers Island is a prison memoir from the diary of American rap artist, Lil Wayne. It was initially published on October 11, 2016, via Plume Books, a subdivision of Penguin Books. The book describes Wayne's experience on New York prison Rikers Island, where he was incarcerated for eight months in 2010. The book details, among other things how Wayne served as a suicide prevention aide as well as how he attempted suicide himself.