Three Rivers Press is the trade paperback imprint of the Crown Publishing Group, a division of Random House. It publishes original paperback titles as well as paperback reprints of books issued initially in hardcover by the other Crown imprints.

The Crown Publishing Group launched its first paperback imprint, Crown Trade Paperbacks, in 1992. Five years later, the imprint decided to re-brand itself as Three Rivers Press, named for the Harlem, East and Hudson rivers that border Manhattan, as well as the three hardcover imprints (Crown, Harmony, and Clarkson Potter) that initially fed the list. In 2010, Three Rivers began the paperback publisher for Crown Archetype and Harmony Books. [1]

Ecco is a New York-based publishing imprint of HarperCollins. It was founded in 1971 by Daniel Halpern as an independent publishing company; Publishers Weekly described it as "one of America's best-known literary houses." In 1999 Ecco was acquired by HarperCollins, with Halpern remaining at the head. Since 2000, Ecco has published the yearly anthology The Best American Science Writing, edited by Jesse Cohen. In 2011, Ecco created two separate publishing lines each "curated" by chef-author Anthony Bourdain and novelist Dennis Lehane.

Ten Speed Press is a publishing house founded in Berkeley, California in 1971 by Philip Wood. Ten Speed Press was bought by Random House in February 2009 and is now part of their Crown Publishing Group division. 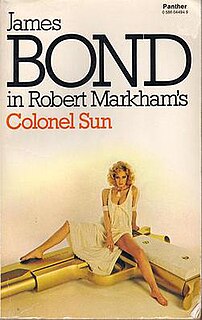 Panther Books Ltd was a British publishing house especially active in the 1950s and 1960s, specialising in paperback fiction. It was established in May 1952 by Hamilton's Ltd and titles carried the line "A Panther Book" or "Panther Science Fiction" on the cover. Science fiction was one of its major genres; its titles included Ray Bradbury's The Golden Apples of the Sun and Asimov's Foundation Trilogy. In 1954 Gordon Landsborough was employed as editor and started improving the quality of the imprint. Instead of publishing original genre novels in paperback and hardback, Panther Books became a reprint publisher, doing paperback reprints of best-selling hardcover novels from other publishers. The quality of the cover art was improved and the list expanded to include non-fiction titles and fiction titles by internationally known, best-selling writers.