A hardcover, hard cover, or hardback (also known as hardbound, and sometimes as case-bound) book is one bound with rigid protective covers (typically of binder's board or heavy paperboard covered with buckram or other cloth, heavy paper, or occasionally leather). It has a flexible, sewn spine which allows the book to lie flat on a surface when opened. Modern hardcovers may have the pages glued onto the spine in much the same way as paperbacks. Following the ISBN sequence numbers, books of this type may be identified by the abbreviation Hbk.

Hardcover books are often printed on acid-free paper, and they are much more durable than paperbacks, which have flexible, easily damaged paper covers. Hardcover books are marginally more costly to manufacture. Hardcovers are frequently protected by artistic dust jackets, but a "jacketless" alternative has increased in popularity: these "paper-over-board" or "jacketless" hardcover bindings forgo the dust jacket in favor of printing the cover design directly onto the board binding. [1] [2]

If brisk sales are anticipated, a hardcover edition of a book is typically released first, followed by a "trade" paperback edition (same format as hardcover) the next year. Some publishers publish paperback originals if slow hardback sales are anticipated. For very popular books these sales cycles may be extended, and followed by a mass market paperback edition typeset in a more compact size and printed on thinner, less hardy paper. This is intended to, in part, prolong the life of the immediate buying boom that occurs for some best sellers: After the attention to the book has subsided, a lower-cost version in the paperback, is released to sell further copies. In the past the release of a paperback edition was one year after the hardback, but by the early twenty-first century paperbacks were released six months after the hardback by some publishers. [3] It is very unusual for a book that was first published in paperback to be followed by a hardback. An example is the novel The Judgment of Paris by Gore Vidal, which had its revised edition of 1961 first published in paperback, and later in hardcover. [4]

Hardcover books are usually sold at higher prices than comparable paperbacks. Books for the general public are usually printed in hardback only for authors who are expected to be successful, or as a precursor to the paperback to predict sale levels; however, many academic books are often only published in hardcover editions.

Hardcovers usually consist of a page block, two boards, and a cloth or heavy paper covering. The pages are sewn together and glued onto a flexible spine between the boards, and it too is covered by the cloth. A paper wrapper, or dust jacket, is usually put over the binding, folding over each horizontal end of the boards. Dust jackets serve to protect the underlying cover from wear. On the folded part, or flap, over the front cover is generally a blurb, or a summary of the book. The back flap is where the biography of the author can be found. Reviews are often placed on the back of the jacket. Many modern bestselling hardcover books use a partial cloth cover, with a cloth-covered board on the spine only, and only boards covering the rest of the book.

This list contains only complete, printed English-language editions of The Hobbit by J. R. R. Tolkien. It is not for derived or unprinted works such as screenplays, graphic novels, or audio books.

Library binding can be divided into the two major categories of "original" and "after market". The original category is as it says: the book was originally bound with the idea that it would be used in a library setting where the book would receive harder use than those usual trade editions sold to the public.

The dust jacket of a book is the detachable outer cover, usually made of paper and printed with text and illustrations. This outer cover has folded flaps that hold it to the front and back book covers.

Marvel Masterworks is an American collection of hardcover and trade paperback comic book reprints published by Marvel Comics, with the main goal of republishing classic Marvel Comics storylines in a hardcover, premium edition, often with restored artwork and better graphical quality when compared to other Marvel collected editions. The collection started in 1987, with volumes reprinting the issues of The Amazing Spider-Man, The Fantastic Four, The X-Men, and The Avengers. The Masterworks line has expanded from such reprints of the 1960s period that fans and historians call the Silver Age of Comic Books to include the 1930s–1940s Golden Age; comics of Marvel's 1950s pre-Code forerunner, Atlas Comics; and even some reprints from the 1970s period called the Bronze Age of Comic Books. 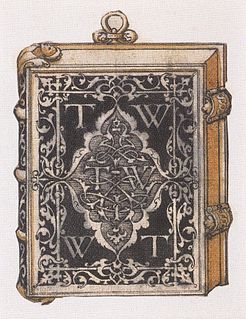 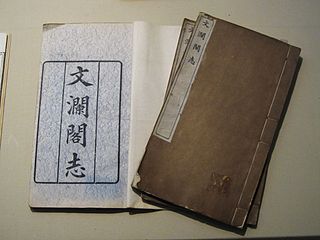 Traditional Chinese bookbinding, also called stitched binding, is the method of bookbinding that the Chinese, Koreans, Japanese, and Vietnamese used before adopting the modern codex form. 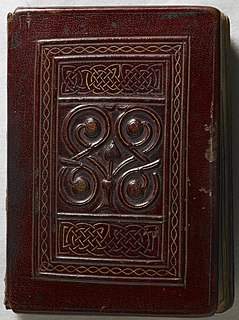 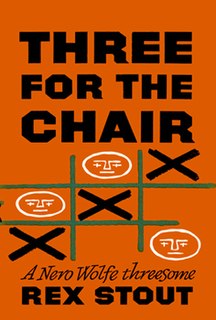 Three for the Chair is a collection of Nero Wolfe mystery novellas by Rex Stout, published by the Viking Press in 1957, and by Bantam Books in various paperback printings beginning in 1958. The book contains three stories: 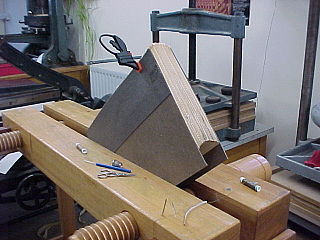 Bindery refers to a studio, workshop or factory where sheets of (usually) paper are fastened together to make books, but also where gold and other decorative elements are added to the exterior of books, where boxes or slipcases for books are made and where the restoration of books is carried out. 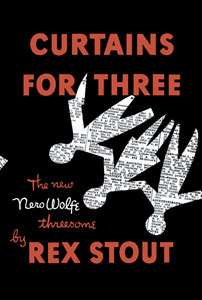 Curtains for Three is a collection of Nero Wolfe mystery novellas by Rex Stout, published by the Viking Press in 1951 and itself collected in the omnibus volume Full House. The book comprises three stories that first appeared in The American Magazine: 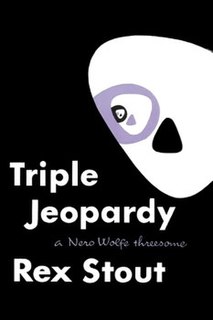 Triple Jeopardy is a collection of Nero Wolfe mystery novellas by Rex Stout, published by the Viking Press in 1952. Itself collected in the omnibus volume Kings Full of Aces, the book comprises three stories that first appeared in The American Magazine:

Three Men Out is a collection of Nero Wolfe mystery novellas by Rex Stout, published by the Viking Press in 1954. The book comprises three stories that first appeared in The American Magazine: 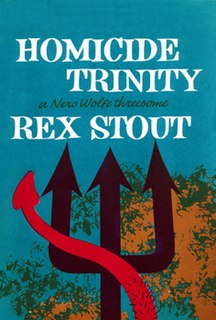 Homicide Trinity is a collection of Nero Wolfe mystery novellas by Rex Stout, published by the Viking Press in 1962. The book comprises three stories:

Please Pass the Guilt is a Nero Wolfe detective novel by Rex Stout, published by the Viking Press in 1973. Unusually for a Nero Wolfe story, which mostly take place very near the time of publication, this novel is set in 1969, though it was originally published in 1973. 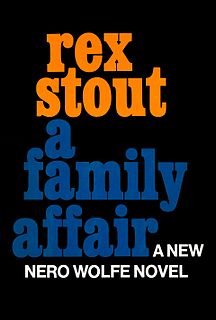 A Family Affair is the last Nero Wolfe detective novel by Rex Stout, published by the Viking Press in 1975. The prolific author, who had penned more than 70 stories in the internationally successful Nero Wolfe series since 1934, died at the age of 88, less than six months after publication of this last book. 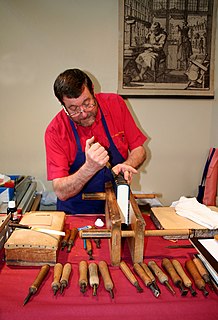 Bookbinding is the process of physically assembling a book of codex format from an ordered stack of paper sheets that are folded together into sections called signatures or sometimes left as a stack of individual sheets. Several signatures are then bound together along one edge with a thick needle and sturdy thread. Alternative methods of binding that are cheaper but less permanent include loose-leaf rings, individual screw posts or binding posts, twin loop spine coils, plastic spiral coils, and plastic spine combs. For protection, the bound stack is either wrapped in a flexible cover or attached to stiff boards. Finally, an attractive cover is adhered to the boards, including identifying information and decoration. Book artists or specialists in book decoration can also greatly enhance a book's content by creating book-like objects with artistic merit of exceptional quality. 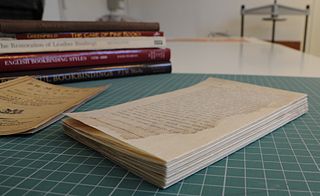 Book rebinding is the renewal or replacement of the cover of a book. Typically, this requires restitching or renewal of the glue which holds the pages in place.

"Omit Flowers" is a Nero Wolfe mystery novella by Rex Stout, first published in the November 1948 issue of The American Magazine. It first appeared in book form in the short-story collection Three Doors to Death, published by the Viking Press in 1950.

"Blood Will Tell" is a Nero Wolfe mystery novella by Rex Stout, first published in the December 1963 issue of Ellery Queen's Mystery Magazine. It first appeared in book form in the short-story collection Trio for Blunt Instruments, published by the Viking Press in 1964.