Editing is the process of selecting and preparing written, photographic, visual, audible, or cinematic material used by a person or an entity to convey a message or information. The editing process can involve correction, condensation, organisation, and many other modifications performed with an intention of producing a correct, consistent, accurate and complete piece of work. [1]

The editing process often begins with the author's idea for the work itself, continuing as a collaboration between the author and the editor as the work is created. Editing can involve creative skills, human relations and a precise set of methods. [2] [3]

The top editor at many publications may be known as the chief editor, executive editor, or simply the editor. A frequent and highly regarded contributor to a magazine may acquire the title of editor-at-large or contributing editor. Mid-level newspaper editors often manage or help to manage sections, such as business, sports and features. In U.S. newspapers, the level below the top editor is usually the managing editor.

In the book publishing industry, editors may organize anthologies and other compilations, produce definitive editions of a classic author's works (scholarly editor), and organize and manage contributions to a multi-author book (symposium editor or volume editor). Obtaining manuscripts or recruiting authors is the role of an acquisitions editor or a commissioning editor in a publishing house. [4] Finding marketable ideas and presenting them to appropriate authors are the responsibilities of a sponsoring editor.

Copy editors correct spelling, grammar and align writings to house style. Changes to the publishing industry since the 1980s have resulted in nearly all copy editing of book manuscripts being outsourced to freelance copy editors. [4]

At newspapers and wire services, press or copy editors write headlines and work on more substantive issues, such as ensuring accuracy, fairness, and taste. In some positions, they design pages and select news stories for inclusion. At U.K. and Australian newspapers, the term is sub-editor. They may choose the layout of the publication and communicate with the printer. These editors may have the title of layout or design editor or (more so in the past) makeup editor.

Within the publishing environment, editors of scholarly books are of three main types, each with particular responsibilities:

In the case of multi-author edited volumes, before the manuscript is delivered to the publisher it has undergone substantive and linguistic editing by the volume's editor, who works independently of the publisher.

As for scholarly journals, where spontaneous submissions are more common than commissioned works, the position of journal editor or editor-in-chief replaces the acquisitions editor of the book publishing environment, while the roles of production editor and copy editor remain. However, another editor is sometimes involved in the creation of scholarly research articles. Called the authors' editor, this editor works with authors to get a manuscript fit for purpose before it is submitted to a scholarly journal for publication.

The primary difference between copy editing scholarly books and journals and other sorts of copy editing lies in applying the standards of the publisher to the copy. Most scholarly publishers have a preferred style that usually specifies a particular dictionary and style manual—for example, the Chicago Manual of Style , the MLA Style Manual or the APA Publication Manual in the U.S., or the New Hart's Rules in the U.K.

It helps if the technical editor is familiar with the subject being edited. The "technical" knowledge that an editor gains over time while working on a particular product or technology does give the editor an edge over another who has just started editing content related to that product or technology. But essential general skills are attention to detail, the ability to sustain focus while working through lengthy pieces of text on complex topics, tact in dealing with writers, and excellent communication skills.

Editing is a growing field of work in the service industry. Paidediting services may be provided by specialized editing firms or by self-employed (freelance) editors.

Editing firms may employ a team of in-house editors, rely on a network of individual contractors or both. [5] Such firms are able to handle editing in a wide range of topics and genres, depending on the skills of individual editors. The services provided by these editors may be varied and can include proofreading, copy editing, online editing, developmental editing, editing for search engine optimization (SEO), etc.

Self-employed editors work directly for clients (e.g., authors, publishers) or offer their services through editing firms, or both. They may specialize in a type of editing (e.g., copy editing) and in a particular subject area. Those who work directly for authors and develop professional relationships with them are called authors' editors. 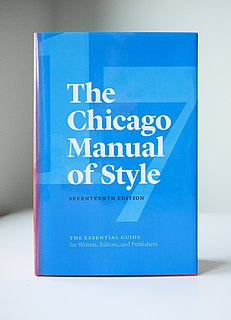 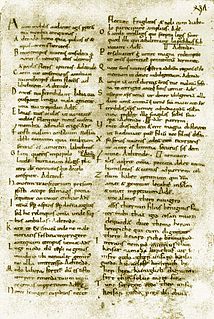 Textual criticism is a branch of textual scholarship, philology, and of literary criticism that is concerned with the identification of textual variants, or different versions, of either manuscripts or of printed books. Such texts may range in dates from the earliest writing in cuneiform, impressed on clay, for example, to multiple unpublished versions of a 21st-century author's work. Historically, scribes who were paid to copy documents may have been literate, but many were simply copyists, mimicking the shapes of letters without necessarily understanding what they meant. This means that unintentional alterations were common when copying manuscripts by hand. Intentional alterations may have been made as well, for example the censoring of printed work for political, religious or cultural reasons.

Copy editing is the process of revising written material to improve readability and fitness, as well as ensuring that text is free of grammatical and factual errors. The Chicago Manual of Style states that manuscript editing encompasses "simple mechanical corrections through sentence-level interventions to substantial remedial work on literary style and clarity, disorganized passages, baggy prose, muddled tables and figures, and the like ". In the context of print publication, copy editing is done before typesetting and again before proofreading. Outside of traditional book and journal publishing, the term copy editing is sometimes incorrectly referred to as proofreading, or the term copy editing sometimes includes additional tasks. 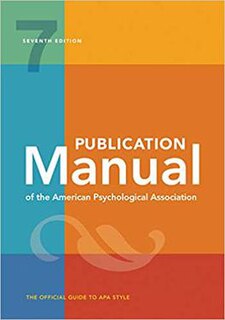 APA style is a writing style and format for academic documents such as scholarly journal articles and books. It is commonly used for citing sources within the field of behavioral and social sciences. It is described in the style guide of the American Psychological Association (APA), which is titled the Publication Manual of the American Psychological Association. The guidelines were developed to aid reading comprehension in the social and behavioral sciences, for clarity of communication, and for "word choice that best reduces bias in language". APA style is widely used, either entirely or with modifications, by hundreds of other scientific journals, in many textbooks, and in academia. The actual edition is its 7th revision.

Standard manuscript format is a formatting style for manuscripts of short stories, novels, poems and other literary works. Even with the advent of desktop publishing, making it possible for anyone to prepare text that appears professionally typeset, many publishers still require authors to submit manuscripts within their respective guidelines. Although there is no single set of guidelines, the "standard" format describes formatting that is considered to be generally acceptable.

Hart's Rules for Compositors and Readers at the University Press, Oxford—today published under the short title New Hart's Rules—is an authoritative reference book and style guide published in England by Oxford University Press (OUP). Hart's Rules originated as a compilation of best practices and standards by English printer and biographer Horace Hart over almost three decades during his employment at other printing establishments, but they were first printed as a single broadsheet page for in-house use by the OUP in 1893 while Hart's job was controller of the university press. They were originally intended as a concise style guide for the staff of the OUP, but they developed continuously over the years, were published in 1904, and soon gained wider use as a source for authoritative instructions on typesetting style, grammar, punctuation, and usage.

Sentence spacing concerns how spaces are inserted between sentences in typeset text and is a matter of typographical convention. Since the introduction of movable-type printing in Europe, various sentence spacing conventions have been used in languages with a Latin alphabet. These include a normal word space, a single enlarged space, and two full spaces. 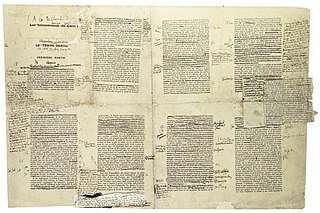 In printing and publishing, proofs are the preliminary versions of publications meant for review by authors, editors, and proofreaders, often with extra-wide margins. Galley proofs may be uncut and unbound, or in some cases electronically transmitted. They are created for proofreading and copyediting purposes, but may also be used for promotional and review purposes.

Sentence spacing guidance is provided in many language and style guides. The majority of style guides that use a Latin-derived alphabet as a language base now prescribe or recommend the use of a single space after the concluding punctuation of a sentence.

An authors' editor is a language professional who works "with authors to make draft texts fit for purpose". He or she edits manuscripts that have been drafted by the author but have not yet been submitted to a publisher for publication. This type of editing is called author editing, to distinguish it from other types of editing done for publishers on documents already accepted for publication: an authors' editor works "with an author rather than for a publisher". A term sometimes used synonymously with authors' editor is "manuscript editor" which, however, is less precise as it also refers to editors employed by scholarly journals to edit manuscripts after acceptance.

A manuscript is the work that an author submits to a publisher, editor, or producer for publication. In publishing, "manuscript" can also refer to one or both of the following: