In journalism, an assignment editor is an editor – either at a newspaper or a radio or television station – who selects, develops, and plans reporting assignments, either news events or feature stories, to be covered by reporters.

An assignment editor often fields calls from the public, who give news tips, or information about a possible story or event to be covered. Sometimes, these calls may:

Other times, the news tip may come in the form of a news release, which may either promote an event, meeting, etc. or alert editors and reporters about an upcoming news conference. Sometimes, assignment editors must sift through hundreds of news releases each day. In many cases, possibly dependent on the market, assignment editors use police scanners, listening to traffic between 911 dispatchers and police officers in the field.

Whatever the case, it is the assignment editor's job to determine what news tips and news releases are the most newsworthy and then decide which reporter to assign a story to. Those assignments are often determined based on the reporter's experience, skills, and his/her beat (e.g., police, courts, schools, city hall, county, etc.).

If a major story develops – such as a disaster or economic development – an assignment editor may enlist several reporters (in addition to whoever usually covers that beat) to cover various angles of a story. For instance, if the story is about a plant closing, one reporter may be asked to do the main story about the closing, while other reporters may be asked to do stories on such things as employee reaction, the reaction from business and community leaders, a history of the plant (and other plant closings, if appropriate), etc.

An assignment editor often has a minimum of one year of experience working for a particular news organization and a number of years of experience working in journalism, usually as a line or copy editor, or even a staff writer. An assignment editor is expected to be well versed in journalistic standards and ethics and have good knowledge of the community in which he/she works and lives.

The position is that of a commissioning editor, and its responsibilities usually entail the day-to-day management of staff writers, beat reporters, and correspondents, procuring original content from freelance writers, and managing the daily "budget meeting". Sometimes, it may be a journalist's first job as a senior editor in the newsroom, working with other editorial sections – such as copy, opinion, magazine, managing, and chief editors – alongside the breaking news desk. As more news outlets move to a digital first model, the role has changed substantially, with the emphasis shifting from page planning to commissioning time-sensitive pieces that fit a more rapid news cycle.

At many smaller daily and weekly newspapers, the role of assignment editor is often combined with an editor's other duties (e.g., an assistant editor who also lays out the pages may also be asked to assign stories to reporters).

News style, journalistic style, or news-writing style is the prose style used for news reporting in media such as newspapers, radio and television.

Journalism scandals are high-profile incidents or acts, whether intentional or accidental, that run contrary to the generally accepted ethics and standards of journalism, or otherwise violate the 'ideal' mission of journalism: to report news events and issues accurately and fairly.

In journalism, a source is a person, publication, or other record or document that gives timely information. Outside journalism, sources are sometimes known as "news sources". Examples of sources include but are not limited to official records, publications or broadcasts, officials in government or business, organizations or corporations, witnesses of crime, accidents or other events, and people involved with or affected by a news event or issue.

A letter to the editor is a letter sent to a publication about issues of concern from its readers. Usually, letters are intended for publication. In many publications, letters to the editor may be sent either through conventional mail or electronic mail.

A newsroom is the central place where journalists—reporters, editors, and producers, associative producers, news anchors, associate editor, residence editor, visual text editor, Desk Head, stingers along with other staffs—work to gather news to be published in a newspaper and/or an online newspaper or magazine, or broadcast on radio, television, or cable. Some journalism organizations refer to the newsroom as the city room.

Journalistic ethics and standards comprise principles of ethics and good practice applicable to journalists. This subset of media ethics is known as journalism's professional "code of ethics" and the "canons of journalism". The basic codes and canons commonly appear in statements by professional journalism associations and individual print, broadcast, and online news organizations. 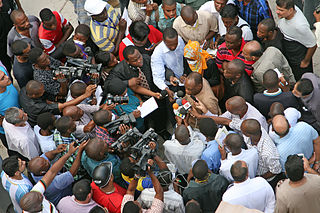 Broadcast journalism is the field of news and journals which are broadcast by electronic methods instead of the older methods, such as printed newspapers and posters. It works on radio, television and the World Wide Web. Such media disperse pictures, visual text and sounds.

An article is a written work published in a print or electronic medium. It may be for the purpose of propagating news, research results, academic analysis, or debate.

The El Paso Times is the newspaper for the U.S. city of El Paso, Texas. The paper was founded in 1881 by Marcellus Washington Carrico. The Times first published April 2, 1881. It originally started out as a weekly but within a year's time, it became the daily newspaper for the frontier town. The newspaper has an approximate daily circulation of 65,000 and 125,000 on Sundays.

A correction in a newspaper usually consists of posting a public notice about a typographical error or factual mistake in a previously published article.

Parachute journalism is the practice of placing journalists into an area to report on a story in which the reporter has little knowledge or experience. The lack of knowledge and tight deadlines often result in inaccurate or distorted news reports, especially during breaking news. As opposed to expert foreign correspondents who might live in the locale, news organizations will sometimes send either general assignment reporters or well-known celebrity journalists into unfamiliar areas.

A news bureau is an office for gathering or distributing news. Similar terms are used for specialized bureaus, often to indicate geographic location or scope of coverage: a ‘Tokyo bureau’ refers to a given news operation's office in Tokyo; 'foreign bureau' is a generic term for a news office set up in a country other than the primary operations center; a ‘Washington bureau’ is an office, typically located in, that covers news related to national politics in the United States. The person in charge of a news bureau is often called the bureau chief.

The Wire is a fictional television drama series produced by the Home Box Office network. The fifth season of the show included a focus on the media and in particular a fictionalized version of The Baltimore Sun. The series introduced many new characters who were professional journalists.

Collaborative journalism is a growing practice in the field of journalism. One definition is "a cooperative arrangement between two or more news and information organizations, which aims to supplement each organization’s resources and maximize the impact of the content produced." It is practiced by both professional and amateur reporters. It is not to be confused with citizen journalism.