Meteorologists work in government agencies, private consulting and research services, industrial enterprises, utilities, radio and television stations, and in education. They are not to be confused with weather presenters, who present the weather forecast in the media and range in training from journalists having just minimal training in meteorology to full fledged meteorologists.

Meteorologists study the Earth's atmosphere and its interactions with the Earth's surface, the oceans and the biosphere. Their knowledge of applied mathematics and physics allows them to understand the full range of atmospheric phenomena, from snowflake formation to the Earth's general climate. [3]

Meteorologists can also be consultants for private firms in studies for projects involving weather phenomena such as windfarms, tornado protection, etc. They finally can be weather presenters in the media (radio, TV, internet).

To become a meteorologist, a person must take at least one undergraduate university degree in meteorology. [3] For researchers, this training continues with higher education, while for forecasters, each country has its own way of training. [3] For example, the Meteorological Service of Canada and UK Met Office have their own training course after the university, while Météo-France takes charge of all the training once the person has passed the entrance examination at the National School of Meteorology after high school. [5] In United States, forecasters are hired by the National Weather Service or private firms after university, and receive on-the-job training, while researchers are hired according to their expertise. [6]

In some countries there is a third way for weather presenters, such as in United States, where a graduate in meteorology and communication at the college or university level can be hired by media. 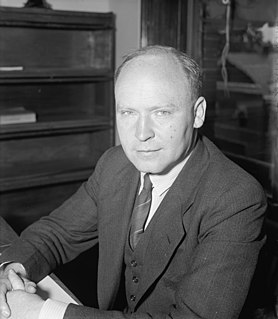 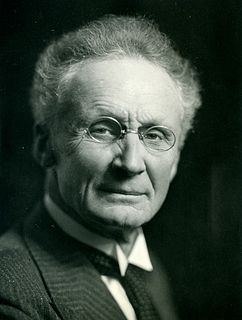 Vilhelm Friman Koren Bjerknes was a Norwegian physicist and meteorologist who did much to found the modern practice of weather forecasting. He formulated the primitive equations that are still in use in numerical weather prediction and climate modeling, and he developed the so-called Bergen School of Meteorology, which was successful in advancing weather prediction and meteorology in the early 20th century.

The American Meteorological Society (AMS) is the premier scientific and professional organization in the United States promoting and disseminating information about the atmospheric, oceanic, and hydrologic sciences. Its mission is to advance the atmospheric and related sciences, technologies, applications, and services for the benefit of society.

Professor Sir Brian John Hoskins, CBE FRS, is a British dynamical meteorologist and climatologist based at the Imperial College London and the University of Reading. A mathematician by training, his research has focused on understanding atmospheric motion from the scale of fronts to that of the Earth, using a range of theoretical and numerical models. He is perhaps best known for his work on the mathematical theory of extratropical cyclones and frontogenesis, particularly through the use of potential vorticity. He has also produced research across many areas of meteorology, including the Indian monsoon and global warming, recently contributing to the Stern review and the IPCC Fourth Assessment Report. 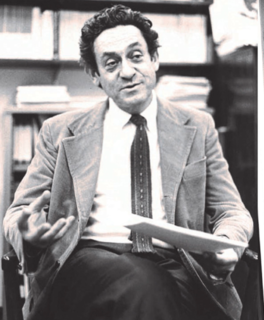 Jule Gregory Charney was an American meteorologist who played an important role in developing numerical weather prediction and increasing understanding of the general circulation of the atmosphere by devising a series of increasingly sophisticated mathematical models of the atmosphere. His work was the driving force behind many national and international weather initiatives and programs.

Jacob Aall Bonnevie Bjerknes was a meteorologist. He is known for his key paper in which he pointed the dynamics of the polar front, mechanism for north-south heat transport and for which he was also awarded with a doctorate degree from University of Oslo. 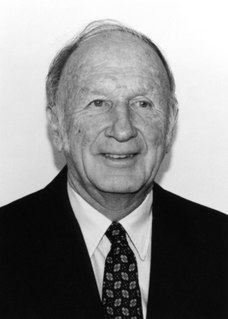 Edward Norton Lorenz was an American mathematician and meteorologist who established the theoretical basis of weather and climate predictability, as well as the basis for computer-aided atmospheric physics and meteorology. He is best known as the founder of modern chaos theory, a branch of mathematics focusing on the behavior of dynamical systems that are highly sensitive to initial conditions.

Erik Herbert Palmén was Finnish meteorologist, born in Vaasa. He worked at the University of Chicago in the Chicago school of meteorology on cyclones and weather fronts with Vilhelm Bjerknes. He contributed to the explanation of the dynamics of the jet stream and the analysis of data collected by radiosondes; his preprocessed and quality checked datasets were widely used by other researchers. Palmen was a multisided researcher who published articles in meteorology, geophysics and oceanography. The 1969 book by Palmen and Chester W. Newton, "Atmospheric Circulation Systems: Their Structure and Interpretation", is still used as lecture material in the universities around the world.

The "Bergen School of Meteorology" is a school of thought which is the basis for much of modern weather forecasting.

Francis Wilton Reichelderfer, also known as “Reich”, presided over a revolutionary era in the history of the Weather Bureau. From 1938 to 1963, Reich guided the organization through World War II and brought modern technology to weather forecasting. His greatest strengths were comprehending where meteorology should be going, acting to move in that direction, and then attracting and keeping the talent to make it happen.

Irving P. Krick was an American meteorologist and inventor, the founding professor of Department of Meteorology at California Institute of Technology (1933–1948), one of the U.S. Air Force meteorologists who provided forecasts for the Normandy Landings in 1944, a controversial pioneer of long-term forecasting and cloud seeding, and "a brilliant American salesman" who in 1938 started the first private weather business in the United States.

The Geophysical Institute, University of Bergen is a marine research facility located in Bergen, Norway. Founded in 1917 by Bjørn Helland-Hansen, the institute studies the field of oceanography dealing with the patterns of the weather in the North Atlantic Ocean off the coast of Norway. Within recent years, focus has been increasingly on geophysics and environmental research. The research activities at the institute span from small scale measurement of turbulence up to studies of the large scale ocean currents, from local air and noise pollution up to studies of global scale climate change.

Akio Arakawa was a Japanese-born American climate scientist. He was an Emeritus Professor in the Department of Atmospheric and Oceanic Sciences at the University of California, Los Angeles.

Pinhas Alpert is a professor of Atmospheric Sciences at Tel Aviv University.