A weather presenter (also known colloquially in North America as a weatherman or weather broadcaster) is a person who presents the weather forecast daily on radio, television or internet news broadcasts. Using diverse tools, such as projected weather maps, they inform the viewers of the current and future weather conditions, explain the reasons underlying this evolution, and relaying to the public any weather hazards and warnings issued for their region, country or larger areas. There are no basic qualifications to become a weather presenter; depending on the country and the media, it can range from an introduction to meteorology for a television host to a diploma in meteorology from a recognized university. Therefore a weather presenter is not to be confused with a meteorologist, or weather forecaster, the holder of a diploma in meteorology.

The United States was the first country in which television channels began broadcasting weather reports in the late 1940s, but presenters were doing it on radio well before then. [1] From newsletters of the US Weather Bureau (now the National Weather Service), the host of a program traced the depressions, fronts and lows, mentioned in the general situation, and read the forecast. Thus, the host of a popular morning show, NBC's Today show, was chatting live with the Bureau's meteorologist. [2] As the weather report became very popular, national television networks hired professional meteorologists to distinguish themselves from their competitors, but in the early 1960s the "Miss Weather" era began. The latter were seen by broadcast managers as more pleasant to watch, and advertised for local shops. [2]

In 1981, John Coleman, head meteorologist for a Chicago television station (WLS-TV station) and later ABC Good Morning America national morning program, proposed a weather forecasting station project to Frank Batten, the owner of a newspaper in Virginia. The latter had realized that many of his readers were buying the newspaper for the weather forecast, and he jumped on the idea. After ten months to find funding and build the infrastructure, The Weather Channel (TWC) began broadcasting on May 2, 1982 from Atlanta, Georgia. This was the first television channel to broadcast weather forecasts 24 hours a day, using a full staff of general meteorologists and even specialists. [3]

In Canada, the first presenter on television was Percy Saltzman, a professional meteorologist, who launched the regular news bulletins on the English-language Canadian Broadcasting Corporation in 1952. Canada's weather bulletins have developed similarly to those in the United States. However, it is less common to see on-screen meteorologists, and networks invest much less in meteorological equipment. On the French-speaking side, Jacques Lebrun at Télé-Métropole, a self-educated presenter, was the most well-known of the earliest weathermen of the 1970s and '80s. The Weather Network, similar to TWC, went live on September 1, 1988, but it uses mostly news persons as presenters.

Other countries have followed similar paths. For instance, the first broadcast of the weather on French television dates back to December 17, 1946 and was presented by Paul Douchy in the Téléjournal program. [1] The forecasters of National Meteorology (now Météo-France) commented live, once a week, with a weather map of the time scheduled for the next day on the RTF. In February 1958, France became one of the first countries to broadcast a daily weather report on television, after the United States, Canada and Great Britain (BBC began broadcasting in October 1954). [1]

Presentation techniques have varied greatly since the beginning of television and radio. The first bulletins were mostly a reading of the forecast issued by the local national weather service. With the advent of television, this was accompanied by preset charts or drawn on blackboard by the presenter. Gradually, standard maps with icons to describe the weather were adopted everywhere. [4] In the 1960s, weather radar and meteorological satellites appeared and their images were incorporated into weather forecasts as still images. For instance, the first use of weather radar on television in the United States was in September 1961 when Hurricane Carla was approaching the state of Texas and local Reporter Dan Rather convinced the local US Weather Bureau staff to let him broadcast live from their office showing the radar data with a rough overlay of the Gulf of Mexico on a transparent sheet of plastic. His report helped the alerted population accepting the evacuation of an estimated 350,000 people by the authorities, saving several thousand lives. [5]

The development of video and computers made it possible to create interactive presentations. Among other things, the overlay, made on the fly, allows the presenter to make a description of the time in front of a blue or green monochromatic screens, and the technical section adds the maps to the editing. These can be animation loops of satellite images, radar or lightning detection, simulations of the expected evolution of clouds, pressure fields, rain or snow zones, etc. They can even insert videos of a meteorological event that makes the headline or any other interesting graphic. [1] Computer companies even specialize in the production of computer graphics for meteorology and incorporate analyzes usually reserved for professional meteorologists such as tornado storm analysis and tropical cyclones. Content adapted to several clienteles are also offered from children to adult audiences.

In North America, the American Meteorological Society, [6] the National Weather Association [7] and the Canadian Meteorological and Oceanographic Society [8] have a presenter certification program. On the American side, a degree in meteorology is needed and a committee evaluates their skills and experiences before giving accreditation. On the Canadian side, the diploma can be replaced by work experience and knowledge. This certification gives some notoriety in the public eye but is not mandatory to become a presenter.

Several anecdotes circulate about the work of the weather presenters which are often the target of jokes. There are even a few movies and TV series that have a character from this profession, among them:

The Weather Channel (TWC) is an American pay television channel owned by the Weather Group, LLC, a subsidiary of the Allen Media Group. The channel's headquarters are in Atlanta, Georgia. Launched on May 2, 1982, the channel broadcasts weather forecasts and weather-related news and analysis, along with documentaries and entertainment programming related to weather. A sister network, Weatherscan, is a digital cable and satellite service that offers 24-hour automated local forecasts and radar imagery. The Weather Channel also produces outsourced weathercasts, notably for RFD-TV.

MétéoMédia is a Canadian French-language weather information specialty channel and web site owned by Pelmorex. MétéoMédia primarily serves viewers in Quebec, although some cable TV systems in Ontario and New Brunswick carry the channel as well. It is available nationwide via satellite. MétéoMédia went on the air along with the bilingual specialty service's English-language component, The Weather Network, for the first time on September 1, 1988; both MétéoMédia and The Weather Network broadcast separate 24-hour-a-day feeds.

News broadcasting is the medium of broadcasting of various news events and other information via television, radio, or internet in the field of broadcast journalism. The content is usually either produced locally in a radio studio or television studio newsroom, or by a broadcast network. It may also include additional material such as sports coverage weather forecasts, traffic reports, commentary, and other material that the broadcaster feels is relevant to their audience.

Richard R. Fletcher was a broadcast meteorologist. He was Chief Meteorologist for WTSP in St. Petersburg, Florida, for 28 years. He was a holder of the American Meteorological Society Seal of Approval, having received it in 1978. 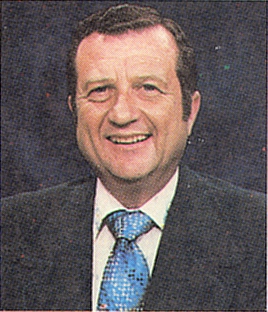 Geoff Fox is an American television broadcast meteorologist with a career spanning nearly 4 decades. For 27 years he was at the television station WTNH in New Haven, Connecticut, where he started in 1984 and was senior meteorologist until 2011, and later with WTIC-TV in Hartford, Connecticut, where he was the weeknight 5:00 and 11:00 p.m. meteorologist, reported science and technology stories for the 4:00 p.m. newscast and was host for a garden segment titled "Geoff's Garden".

David Devall is a Canadian retired broadcaster and meteorologist. He served as the chief forecaster at CFTO-TV in Toronto for more than 48 years beginning in 1961, and was recognized as having had the "longest career as a weather forecaster" by Guinness World Records and the World Records Academy upon his retirement on April 3, 2009. Devall was also a recipient of the RTNDA's lifetime achievement award in 2009.

Percy Philip Saltzman, was a meteorologist and television personality best remembered for being the first weatherman in English-speaking Canadian television history.

John Stewart Coleman was an American television weatherman. Along with Frank Batten, he co-founded The Weather Channel and briefly served as its Chief Executive Officer and President. He retired from broadcasting in 2014 after nearly 61 years, having worked the last 20 years at KUSI-TV in San Diego.

Francis Alfred Wilson, FRMetS, CMet, is a Scottish-born weather forecaster who was a presenter and the Head of Weather on the then BBCbreakfast 1981 until 1992 and Sky News, from 1993 until 2010.

André M. Bernier is an American meteorologist, serving as the Cleveland-based WJW-TV's weekday evening meteorologist. He won two Emmy awards for his weathercasts and has been at the station since February 1988, when Cleveland's very first full-length local morning newscast began. After nearly twenty years on weekday mornings, Bernier moved to the weekday prime-time on May 28, 2007.

Jerry Taft was an American meteorologist and weather presenter who served as chief meteorologist for WLS-TV in Chicago. He worked for 34 years with WLS, and for 42 years as a broadcast meteorologist in the Chicago media market.

The Weather Channel is an American basic cable and satellite television channel owned by Byron Allen's Entertainment Studios that focuses on national and international weather information; although in recent years, the channel has also incorporated entertainment-based programs related to weather on its schedule. This article details the history of the channel, which dates back its founding to around 1980.

Leon "Stormy" Rottman was an American weather forecaster and television host. After his experience with reporting weather conditions for the U.S. Air Force during World War II and the Korean War, Rottman began a civilian career as a weather presenter on both television and radio. He was the primary evening weatherman for many years at Channel 9 in Denver, Colorado.

Peter Alexander Byrne is an Australian television presenter and meteorologist. Byrne was most notable for being a weather presenter for WIN Television from 1990 until 2012.

Peter Coade is a Canadian broadcast weather presenter. In 2013, he was certified by the Guinness Book of World Records as having had the longest career of any weather broadcaster. He held this record until 2016, when American meteorologist Dick Goddard broke it.