Last updated December 01, 2020
Form of journalism in which reporters deeply investigate a single topic
For broader coverage of this topic, see Watchdog journalism.
For other uses, see Investigative Journalism (disambiguation).

Most investigative journalism has traditionally been conducted by newspapers, wire services, and freelance journalists. With the decline in income through advertising, many traditional news services have struggled to fund investigative journalism, which is time-consuming and therefore expensive. Journalistic investigations are increasingly carried out by news organizations working together, even internationally (as in the case of the Panama Papers and Paradise Papers), or by organizations such as ProPublica, which have not operated previously as news publishers and which rely on the support of the public and benefactors to fund their work.

University of Missouri journalism professor Steve Weinberg defined investigative journalism as: "Reporting, through one's own initiative and work product, matters of importance to readers, viewers, or listeners." [2] In many cases, the subjects of the reporting wish the matters under scrutiny to remain undisclosed. There are currently university departments for teaching investigative journalism. Conferences are conducted presenting peer reviewed research into investigative

British media theorist Hugo de Burgh (2000) states that: "An investigative journalist is a man or woman whose profession is to discover the truth and to identify lapses from it in whatever media may be available. The act of doing this generally is called investigative journalism and is distinct from apparently similar work done by police, lawyers, auditors, and regulatory bodies in that it is not limited as to target, not legally founded and closely connected to publicity." [3]

American journalism textbooks point out that muckraking standards promoted by McClure's Magazine around 1902, "Have become integral to the character of modern investigative journalism." [4] Furthermore, the successes of the early muckrakers continued to inspire journalists. [5] [6]

An investigative reporter may make use of one or more of these tools, among others, on a single story:

Bureaus, centers, and institutes for investigations

The Center for Public Integrity (CPI) is an American nonprofit investigative journalism organization whose stated mission is "to reveal abuses of power, corruption and dereliction of duty by powerful public and private institutions in order to cause them to operate with honesty, integrity, accountability and to put the public interest first." With over 50 staff members, the CPI is one of the largest nonprofit investigative centers in America. It won the 2014 Pulitzer Prize for Investigative Reporting.

Penny press newspapers were cheap, tabloid-style newspapers mass-produced in the United States from the 1830s onwards. Mass production of inexpensive newspapers became possible following the shift from hand-crafted to steam-powered printing. Famous for costing one cent while other newspapers cost around six cents, penny press papers were revolutionary in making the news accessible to middle class citizens for a reasonable price.

Brian Deer is a British investigative reporter, best known for inquiries into the drug industry, medicine and social issues for The Sunday Times. Deer's investigative nonfiction book, The Doctor Who Fooled the World, was published in September 2020 by Johns Hopkins University Press.

Charles Lewis is an investigative journalist based in Washington D.C. Lewis founded The Center for Public Integrity and several other nonprofit organizations and is currently the executive editor of the Investigative Reporting Workshop at the American University School of Communication in D.C. He was an investigative producer for ABC News and the CBS news program 60 Minutes. He left 60 Minutes in 1989 and began the Center for Public Integrity, a non-partisan group which reports on political and government workings, from his home, growing it to a full-time staff of 40 people. When commenting on his move away from prime-time journalism, Lewis expressed his frustration that the most important issues of the day were not being reported.

John M. Crewdson is an American journalist. He won a Pulitzer Prize for The New York Times, where he worked for 12 years. He subsequently spent 26 years in a variety of positions at the Chicago Tribune.

Claims of a link between the MMR vaccine and autism have been extensively investigated and found to be false. The link was first suggested in the early 1990s and came to public notice largely as a result of the 1998 Lancet MMR autism fraud, characterised as "perhaps the most damaging medical hoax of the last 100 years". The fraudulent research paper authored by Andrew Wakefield and published in The Lancet claimed to link the vaccine to colitis and autism spectrum disorders. The paper was retracted in 2010 but is still cited by anti-vaccinationists.

Collaborative journalism is a growing practice in the field of journalism. One definition is "a cooperative arrangement between two or more news and information organizations, which aims to supplement each organization’s resources and maximize the impact of the content produced." It is practiced by both professional and amateur reporters. It is not to be confused with citizen journalism.

The Center for Investigative Reporting/Centar za istraživačko novinarstvo (CIN) is a non-profit investigative center that investigates corruption, organized crime and other system irregularities in Bosnia and Herzegovina. It is based in Sarajevo but covers much of the Balkan region. Its stories appear in local media and other publications. The Center publishes stories and other materials such as online databases, info-graphics, maps and other on its website.

Gerard Ryle is an Irish-Australian investigative reporter who has written on subjects including politics, financial and medical scandals, and police corruption.

Michael Hudson is a Pulitzer-Prize winning American investigative journalist. He is currently on his second stint as a senior editor with the International Consortium of Investigative Journalists (ICIJ). At ICIJ, Hudson has worked on many major projects, including the organization's Offshore Leaks, China Leaks, Luxembourg Leaks, Panama Papers and Paradise Papers investigations of offshore money laundering and tax avoidance. He was an editor, reporter and writer on the Panama Papers investigation, which won the 2017 Pulitzer Prize for explanatory reporting. In between his two tours at ICIJ, Hudson worked as global investigations editor at The Associated Press, where he edited the AP's investigation of war crimes and corruption in Yemen, which won a 2019 Pulitzer Prize for International Reporting.

The Organized Crime and Corruption Reporting Project (OCCRP), founded in 2006, is a consortium of investigative centers, media and journalists operating in Eastern Europe, the Caucasus, Central Asia and Central America. OCCRP is the only full-time investigative reporting organization that specializes in organized crime and corruption. It publishes its stories through local media and in English and Russian through its website. In 2017, NGO Advisor ranked it 69th in the world in their annual list of the 500 best non-governmental organizations (NGO).

The International Consortium of Investigative Journalists (ICIJ) is an independent, Washington, D.C.-based international network of more than 200 investigative journalists and 100 media organizations in over 70 countries. Launched in 1997 by the Center for Public Integrity, ICIJ was spun off in February 2017 into a fully independent organization working on "issues such as "cross-border crime, corruption, and the accountability of power." The ICIJ has exposed smuggling and tax evasion by multinational tobacco companies (2000), "by organized crime syndicates; investigated private military cartels, asbestos companies, and climate change lobbyists; and broke new ground by publicizing details of Iraq and Afghanistan war contracts." 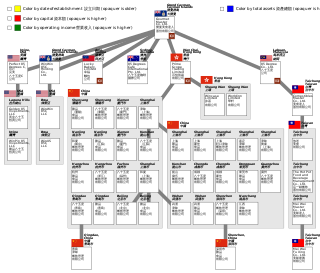 Offshore Leaks is a report disclosing details of 130,000 offshore accounts in April 2013. Some observers have called it the biggest hit against international tax fraud of all times, although it has been pointed out that normal businesses may use the offshore legislation to ease formalities in international trade.

Jake Bernstein is an American Pulitzer Prize-winning investigative journalist and author. He previously worked with the International Consortium of Investigative Journalists. During a 25-year career, he has covered the civil war in Central America, industrial pollution in Texas, political corruption in Miami, system-crashing greed on Wall Street and the secret world of offshore money. He has written travel pieces, reviewed movies and books and taken his journalism to the radio and TV.

Pelin Ünker is a Turkish journalist and a member of the International Consortium of Investigative Journalists. In the late 2010s she investigated the Turkish dimension of the Paradise Papers affair.

Listen to this article (1.8 megabytes)
This audio file was created from a revision of this article dated 12 March 2010, and does not reflect subsequent edits.
(Audio help  · More spoken articles)
This page is based on this Wikipedia article
Text is available under the CC BY-SA 4.0 license; additional terms may apply.
Images, videos and audio are available under their respective licenses.