Last updated May 05, 2022
A freelance journalist, photographer, or videographer

In journalism, a stringer is a freelance journalist, photographer, or videographer who contributes reports, photos, or videos to a news organization on an ongoing basis but is paid individually for each piece of published or broadcast work. [2] [3]

As freelancers, stringers do not receive a regular salary and the amount and type of work is typically at their discretion. However, stringers often have an ongoing relationship with one or more news organizations, to which they provide content on particular topics or locations when the opportunities arise. [4]

The term is typically confined to news industry jargon. In print or in broadcast terms, stringers are sometimes referred to as correspondents or contributors; at other times, they may not receive any public recognition for the work they have contributed.

A reporter or photographer can "string" for a news organization in a number of different capacities and with varying degrees of regularity, so that the relationship between the organization and the stringer is typically very loose. When it is difficult for a staff reporter or photographer to reach a location quickly for breaking news stories, larger news organizations often rely on local stringers to provide rapid scene descriptions, quotations or photos. [2] In this capacity, stringers are used heavily by most television news organizations and some print publications for video footage, photos, and interviews.

Archaically, a stringer was a person who made strings for bows. [5] In a journalistic context, the etymology of the word is uncertain. It is said that newspapers once paid such freelancer journalists per inch of printed text they generated, and that they used string to measure and bill their work. The theory given in the Oxford English Dictionary is that a stringer is a person who strings words together. [6]

The Asian American Journalists Association (AAJA) is a 501(c)3 nonprofit educational and professional organization based in San Francisco, California with more than 1,500 members and 21 chapters across the United States and Asia. The current president is Washington Post reporter Michelle Ye Hee Lee. The executive director is Naomi Tacuyan Underwood.

Photojournalism is journalism that uses images to tell a news story. It usually only refers to still images, but can also refer to video used in broadcast journalism. Photojournalism is distinguished from other close branches of photography by having a rigid ethical framework which demands an honest but impartial approach that tells a story in strictly journalistic terms. Photojournalists contribute to the news media, and help communities connect with one other. They must be well-informed and knowledgeable, and are able to deliver news in a creative manner that is both informative and entertaining.

Chris Hondros was an American war photographer. Hondros was a finalist twice for a Pulitzer Prize for Breaking News Photography.

Tony Zappone, became at age 16 the youngest credentialed journalist to lend press coverage to a major national political convention. He was also the youngest contributor of evidence during the Warren Commission hearings into the assassination of President John F. Kennedy. He began his career in journalism at age 14 as a freelance photographer with The Tampa Tribune, now the Tampa Bay Times, paid at the rate of three dollars per news photo used.

Thomas E. Franklin is an American photographer for The Bergen Record, best known for his photograph Raising the Flag at Ground Zero, which depicts firefighters raising the American flag at the World Trade Center after the September 11, 2001 attacks.

Street Sense is a weekly street newspaper sold by self-employed homeless distributors ("vendors") on the streets of Washington, D.C., the capital city of the United States. It is published by the 501(c)(3) nonprofit Street Sense Media, which also produces documentary filmmaking, photography, theatre, illustration and poetry. The organization says this media, most of which is created by homeless and formerly homeless people, is designed to break down stereotypes and educate the community.

Pictures of the Year International (POYi) is a professional development program for visual journalists run on a non-profit basis by the Missouri School of Journalism's Donald W. Reynolds Journalism Institute. POYi began as an annual competition for photojournalism in 1944. POYi promotes the work of documentary photographers and magazine, newspaper, and freelance photojournalists.

David Leeson was a staff photographer for The Dallas Morning News. He won the Pulitzer Prize for Breaking News Photography in 2004, together with Cheryl Diaz Meyer, for coverage of the Iraq War. He also received the RTNDA Edward R. Murrow Award, the National Headliner Award, and a regional Emmy Award in 2004 for his work as executive producer and photographer for the WFAA-TV documentary "War Stories." 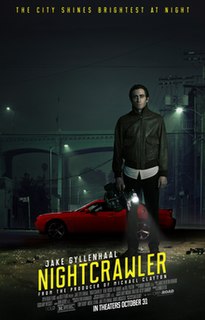 Nightcrawler is a 2014 American neo-noir psychological thriller film written and directed by Dan Gilroy in his directorial debut. It stars Jake Gyllenhaal as Louis "Lou" Bloom, a stringer who records violent events late at night in Los Angeles and sells the footage to a local television news station. Rene Russo, Riz Ahmed, and Bill Paxton also star. A common theme in the film is the symbiotic relationship between unethical journalism and consumer demand.

James Estrin is a photographer, writer, filmmaker, and academic. He is a New York Times senior staff photographer and founder of Lens, The New York Times photography blog. Estrin was part of a team that won a 2001 Pulitzer Prize for a national series of articles entitled “How Race Is Lived In America." He is also the co-executive producer of the documentary film "Underfire: The Untold Story of Pfc. Tony Vaccaro" which appeared on HBO in November 2016.

The British Sports Journalism Awards is an annual ceremony organised by the Sports Journalists' Association that recognise the best of sports journalism in Britain in the previous calendar year. The awards are widely considered the BAFTAs of the industry, and attract entries from all major domestic and international media outlets.

Jack Van Antwerp is an American photography and journalism professional, He is noted as The Wall Street Journal's first global Director of Photography who migrated The Journal from a mostly text-only print and online newspaper to a visual publication.

Whirlybird is a 2020 American documentary film by Matt Yoka. It competed in the US Documentary category at the 2020 Sundance Film Festival.

This glossary of journalism is a list of definitions of terms and concepts used in journalism, its sub-disciplines, and related fields, including news reporting, publishing, broadcast journalism, and various types of journalistic media.

Aziz Karimov is an Azerbaijani photographer. He was awarded Free Media Awards 2020 The Fritt Ord (organization)