Del Rey Books is a branch of Ballantine Books, which is owned by Random House and, in turn, by Penguin Random House. It is a separate imprint established in 1977 under the editorship of author Lester del Rey and his wife Judy-Lynn del Rey. It specializes in science fiction and fantasy books, and formerly manga under its (now defunct) Del Rey Manga imprint.

The first new novel published by Del Rey was The Sword of Shannara by Terry Brooks in 1977. Del Rey also publishes the Star Wars novels under the LucasBooks sub-imprint (licensed from Lucasfilm, a subsidiary of The Walt Disney Studios division of The Walt Disney Company).

Batman
A trilogy based on the Dark Knight version of the character.

The Sword of Shannara is a 1977 epic fantasy novel by American writer Terry Brooks. It is the first book of the Original Shannara Trilogy, followed by The Elfstones of Shannara and The Wishsong of Shannara. Brooks was heavily influenced by J. R. R. Tolkien's The Lord of the Rings and began writing The Sword of Shannara in 1967. It took him seven years to complete, as he was writing the novel while attending law school. Ballantine Books used it to launch the company's new subsidiary Del Rey Books. Its success boosted the commercial expansion of the fantasy genre. 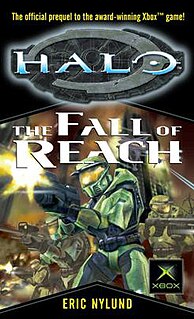 Halo: The Fall of Reach is a military science fiction novel by Eric Nylund, set in the Halo universe, and acts as a prelude to Halo: Combat Evolved, the first game in the series. The book was released in October 2001 and is the first Halo novel. It takes place in the 26th century across several planets and locations. The novel details the events which led up to the game and explains the origins of the SPARTAN II super soldiers, narrating the story of the series protagonist, the Master Chief.

Jody Lynn Nye is an American science fiction writer. She is the author or co-author of approximately forty published novels and more than 100 short stories. She has specialized in science fiction or fantasy action novels and humor. Her humorous series range from contemporary fantasy to military science fiction. About one-third of her novels are collaborations, either as a co-author or as the author of a sequel. She has been an instructor of the Fantasy Writing Workshop at Columbia College Chicago (2007) and she teaches the annual Science Fiction Writing Workshop at DragonCon.

Eric S. Nylund is an American novelist and professional technical writer. His wife, Syne Mitchell, is also a science fiction writer. He holds a B.Sc. in chemistry from the University of California, Santa Barbara and an M.Sc. in chemical physics from the University of California, San Diego. He lives in North Bend, Washington with his wife, Syne, and his son, Kai Nylund. 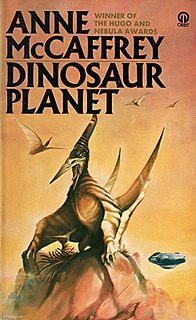 Dinosaur Planet is a science fiction novel by the American-Irish author Anne McCaffrey. It was a paperback original published in 1978, by Orbit Books (UK) and then by Del Rey Books (US), the fantasy & science fiction imprints of Futura Publications and Ballantine Books respectively.

Todd J. McCaffrey is an Irish American author of science fiction best known for continuing the Dragonriders of Pern series in collaboration with his mother Anne McCaffrey.

The White Dragon is a science fantasy novel by American-Irish author Anne McCaffrey. It completes the original Dragonriders trilogy in the Dragonriders of Pern series, seven years after the second book. It was first published by Del Rey Books in June 1978, one year before the young adult Harper Hall trilogy.

Karen Traviss is a science fiction author from Wiltshire, England. She is the author of the Wess'Har series, and is also known for writing tie-in material based on Star Wars, Gears of War, Halo, and G.I. Joe. Her work crosses various forms of media including novels, short stories, comics, and video games.

Dragonquest is a science fantasy novel by the American-Irish author Anne McCaffrey. It is the sequel to Dragonflight, set seven years later and the second book in the Dragonriders of Pern series. Dragonquest was first published by Ballantine Books in May 1971.

Dragon's Kin is a science fiction novel by the American-Irish author Anne McCaffrey and her son Todd McCaffrey. Published by Del Rey Books in 2003, it is the eighteenth book in the Dragonriders of Pern series and the first with Todd as co-author.

In 1987, the Robotech animated series was adapted into novel form by authors James Luceno and Brian Daley and published by Del Rey Books. Having previously collaborated on the animated series Galaxy Rangers, the pair released the Robotech novels under the unified pseudonym of "Jack McKinney". Using fictitious epigraphs in the style of Dune, McKinney's novels escaped the limitations inherent in the dubbed cartoon and fleshed out its chronology in greater detail; most significantly, by adapting the storyline of the aborted sequel project, "The Sentinels". The entire series lasted for twenty-one books, the first fifteen of which were later collected into five three-book omnibus compilations in the early 1990s.

Halo: Ghosts of Onyx is a military science fiction novel by Eric Nylund, based on the Halo series of video games. The book was released in October 2006 and is the fourth Halo novel; Nylund's third contribution to the series. Onyx was also the first of three Halo novels to be published by Tor Books, rather than the previous publisher, Del Rey. 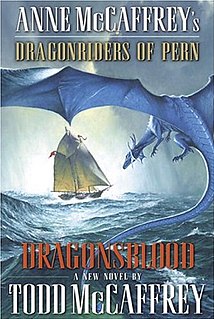 Dragonsblood is a science fiction novel by Todd McCaffrey in the Dragonriders of Pern series that his mother Anne McCaffrey initiated in 1967. Published in 2005, this was the first with Todd as sole author and the nineteenth in the series.

A Gift Of Dragons is a 2002 collection of short fiction by the American-Irish author Anne McCaffrey. All four stories are set on the fictional planet Pern; the book is one of two collections in the science fiction series Dragonriders of Pern by Anne and her son Todd McCaffrey. 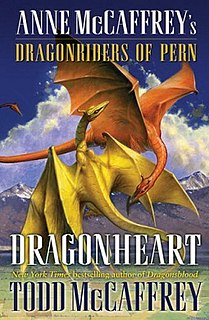 Dragonheart is a science fiction novel by Todd McCaffrey in the Dragonriders of Pern series that his mother Anne McCaffrey initiated in 1967. Published by Del Rey Books in 2008, it was the second for Todd as sole author and the twenty-second in the series. Written after his first book, Dragonsblood, it is a concurrent-time book as opposed to a prequel or sequel.

Dragon's Time is a science fiction novel by the American-Irish author Anne McCaffrey and her son Todd McCaffrey in the Dragonriders of Pern series that she initiated in 1967. Published by Del Rey Books and released June 2011, Dragon's Time is their fourth collaboration in the series and is the sequel to Dragongirl by Todd McCaffrey.