Last updated December 03, 2021
This article is about the Simon & Schuster division. For other meanings, see Pocketbook.
American publisher

Pocket Books is a division of Simon & Schuster that primarily publishes paperback books. [1] [2]

Pocket Books produced the first mass-market, pocket-sized paperback books in the United States in early 1939 and revolutionized the publishing industry. The German Albatross Books had pioneered the idea of a line of color-coded paperback editions in 1931 under Kurt Enoch, and Penguin Books in Britain had refined the idea in 1935 and had one million books in print by the following year.

Penguin's success inspired entrepreneur Robert de Graff, who partnered with publishers Simon & Schuster to bring it to the American market. Priced at 25 cents and featuring the logo of Gertrude the kangaroo (named after the mother-in-law of the artist, Frank Lieberman), Pocket Books' editorial policy of reprints of light literature, popular non-fiction, and mysteries was coordinated with its strategy of selling books outside the traditional distribution channels. The format size, and the fact that the books were glued rather than stitched, were cost-cutting innovations.

The first ten numbered Pocket Book titles published in 1939 with a print run of about 10,000 copies each:

The edition of Wuthering Heights hit the bestseller list, and by the end of the first year Pocket Books had sold more than 1.5 million units. Robert de Graff continued to refine his selections with movie tie-ins and greater emphasis on mystery novels, particularly those of Christie and Erle Stanley Gardner.

Pocket and its imitators thrived during World War II because material shortages worked to their advantage. During the war, Pocket sued Avon Books for copyright infringement: among other issues, a New York state court found Pocket did not have an exclusive right to the pocket-sized format (both Pocket and Avon published paperback editions of Leslie Charteris' The Saint mystery series, among others).

Phyllis E. Grann who would later become the first woman CEO of a major publishing firm was promoted to run Pocket Books under then CEO Richard E. Snyder. Grann left for Putnam in 1976. [5]

In 1981, Dr. Benjamin Spock's Baby and Child Care was listed as their top seller, having sold 28 million copies at that time and having been acquired in 1946. [4]

In 1989, The Dieter by Susan Sussman became the first hardcover published by Pocket Books.

Pocket was for many years known for publishing works of popular fiction based on movies or TV series, such as the Star Trek franchise (owned by corporate siblings CBS Television Studios and Paramount Pictures). Since first obtaining the Star Trek license from Bantam Books in 1979 (with a publication of the novelization of Star Trek: The Motion Picture ), Pocket has published hundreds of original and adapted works based upon the franchise and continues to publish a new novel every month. [6] [7] Beginning in 2017 with novels based on Star Trek: Discovery , the Star Trek novel lines have gradually moved to Simon & Schuster's Gallery Books line.

Pocket also previously published novels based on Buffy the Vampire Slayer . The author credited for one of the Buffy products is Gertrude Pocket, a reference to the company's kangaroo logo. (The Buffy novels are now published by Simon Spotlight Entertainment, another division of Simon & Schuster.) Pocket Books is also the division that currently owns publication rights to the well-known work of James O'Barr, The Crow .

Star Trek: New Frontier is a series of interlinked novels written by Peter David, published by Simon & Schuster imprints, Pocket Books, Pocket Star, and Gallery Books, from 1997 to 2015. New Frontier was the first Star Trek tie-in fiction property not to be based on a television series. The series was created by John J. Ordover.

Christie Golden is an American author. She has written many novels and several short stories in fantasy, horror and science fiction.

In 1966, Bantam Books acquired the license to publish tie-in fiction based on the science fiction television series Star Trek.

Star Trek: Strange New Worlds is a science fiction anthology series of licensed, fan-written, short stories based on, and inspired by, Star Trek and its spin-off television series and films. The series was published by Simon & Schuster, from 1996 to 2016, edited by Dean Wesley Smith, with assistance from John J. Ordover and Paula M. Block. The collected stories were submitted by amateur writers.

H. Lawrence Hoffman was a commercial book jacket designer, illustrator, and painter who worked in New York City. He illustrated book covers for over 25 publishing companies, including Alfred A Knopf, Pocket Books, Popular Library, Macmillan, Simon & Schuster, The Viking Press, and Random House. Over the course of his career, he illustrated over 600 book jacket covers.

Voyages of Imagination: The Star Trek Fiction Companion (2006) is a reference work by Jeff Ayers published by Pocket Books. The book contains entries on the production and publication of Star Trek tie-in novels published from 1967 to 2006. Included are brief synopses of plots for each featured novel.

Leon Shimkin was an American businessman who helped to build Simon & Schuster into a major publishing company. Shimkin was responsible for many self-help bestsellers turning Dale Carnegie's lectures into the bestselling book How to Win Friends and Influence People and J.K. Lasser's tax books. Shimkin co-founded Pocket Books and was a pioneer by distributing mass market paperbacks through newsstands and drugstores. Shimkin became the third partner to Simon & Schuster's Max Schuster and Richard L. Simon and remained as an executive after Simon & Schuster was sold to Field Enterprises, Inc. in 1944. Shimkin rose to become chairman of the board and owner of Simon & Schuster until he sold it to Gulf + Western in 1975.

Phyllis E. Grann is a former book editor and publishing executive. She was the first female CEO of a major publishing firm, Penguin Putnam, and one of the most commercially successful publishers in recent history. She was a long-time editor for Knopf Doubleday, and a former CEO of the Putnam Berkley Group and was also CEO of Penguin Putnam. Grann was responsible for publishing many notable and bestselling authors at Penguin including A. Scott Berg, Judy Blume, Tom Clancy, Patricia Cornwell, Sue Grafton, Daniel Silva, and Kurt Vonnegut. At Doubleday Grann acquired and edited Jeffrey Toobin, Tina Brown, Bob Herbert, Ayelet Waldman and Tim Weiner. At Knopf she edited John Darnton. 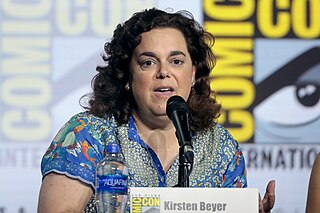 Kirsten Beyer is an American science fiction writer, known for her novels based on the Star Trek: Voyager television series. She is a staff writer for Star Trek: Discovery, and co-creator and executive producer of Star Trek: Picard.