EMMA's disclosure collection operates in coordination with the MSRB's investor protection rules mandating that securities firms and banks selling municipal securities to customers provide them with complete disclosure of all important information about the investment. [8] EMMA also is the central information utility through which municipal securities disclosures mandated by the Securities and Exchange Commission (SEC) through its Rule 15c2-12 are made freely available to the general public. [9] The EMMA continuing disclosure service provides access to audited financial statements, default notices, taxability notices, notices of rating changes, and approximately 30 additional categories of financial and other updates relating to municipal securities. [1] The MSRB and SEC continue to work toward expanding the types and timeliness of disclosures available through EMMA. [10] [11]

Public access to the integrated collection of primary market and secondary market disclosure provided through EMMA parallels the centralized disclosure currently available for securities offerings by public companies through the SEC's EDGAR system, although EMMA provides additional items of information beyond the base disclosures provided by EDGAR, such as trade prices, interest rates, market statistics and educational materials. The collection of disclosure documents available through EMMA for municipal securities is not identical to what is available through EDGAR for registered offerings of corporate or other securities since municipal securities and their state & local governmental issuers are afforded broad exemptions from most provisions of the federal securities laws (such as the Securities Act of 1933, the Securities Exchange Act of 1934 and the Investment Company Act of 1940) otherwise applicable to private-sector issuers of corporate and other types of securities. 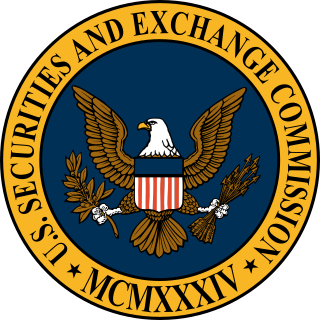 The U.S. Securities and Exchange Commission (SEC) is a large independent agency of the United States federal government, created in the aftermath of the Wall Street Crash of 1929. The primary purpose of the SEC is to enforce the law against market manipulation.

The Sarbanes–Oxley Act of 2002 is a United States federal law that mandates certain practices in financial record keeping and reporting for corporations.

EDGAR, the Electronic Data Gathering, Analysis, and Retrieval system, performs automated collection, validation, indexing, acceptance, and forwarding of submissions by companies and others who are required by law to file forms with the U.S. Securities and Exchange Commission. The database contains a wealth of information about the Commission and the securities industry which is freely available to the public via the Internet.

NYSE Chicago, formerly known as the Chicago Stock Exchange (CHX), is a stock exchange in Chicago, Illinois, US. The exchange is a national securities exchange and self-regulatory organization, which operates under the oversight of the U.S. Securities and Exchange Commission (SEC). Intercontinental Exchange (ICE) acquired CHX in July 2018 and the exchange rebranded as NYSE Chicago in February 2019. 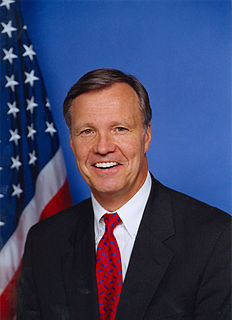 Charles Christopher Cox is an American business leader and former Chairman of the U.S. Securities and Exchange Commission, a 17-year Republican member of the United States House of Representatives, and member of the White House staff in the Reagan Administration. Prior to his Washington service he was a practicing attorney, teacher, and entrepreneur. Following his retirement from government in 2009, he returned to law practice and currently serves as a director, trustee, and advisor to several for-profit and nonprofit organizations.

The Depository Trust & Clearing Corporation (DTCC) is an American post-trade financial services company providing clearing and settlement services to the financial markets. It performs the exchange of securities on behalf of buyers and sellers and functions as a central securities depository by providing central custody of securities.

A money market fund is an open-ended mutual fund that invests in short-term debt securities such as US Treasury bills and commercial paper. Money market funds are managed with the goal of maintaining a highly stable asset value through liquid investments, while paying income to investors in the form of dividends. Although they are not insured against loss, actual losses have been quite rare in practice.

An auction rate security (ARS) typically refers to a debt instrument with a long-term nominal maturity for which the interest rate is regularly reset through a dutch auction. Since February 2008, most such auctions have failed, and the auction market has been largely frozen. In late 2008, investment banks that had marketed and distributed auction rate securities agreed to repurchase most of them at par.

Prosper Marketplace, Inc. is a San Francisco, California-based company in the peer-to-peer lending industry. Prosper Funding LLC, one of its subsidiaries, operates Prosper.com, a website where individuals can either invest in personal loans or request to borrow money. 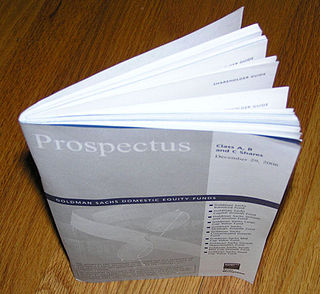 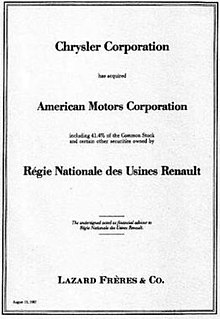 A tombstone is a type of print notice that is most often used in the financial industry to formally announce a particular transaction, such as an initial public offering or placement of stock of a company.

The Financial Industry Regulatory Authority (FINRA) is a private American corporation that acts as a self-regulatory organization (SRO) which regulates member brokerage firms and exchange markets. FINRA is the successor to the National Association of Securities Dealers, Inc. (NASD) as well as the member regulation, enforcement, and arbitration operations of the New York Stock Exchange. The US government agency which acts as the ultimate regulator of the US securities industry, including FINRA, is the US Securities and Exchange Commission (SEC).

The Canadian Securities Administrators is an umbrella organization of Canada's provincial and territorial securities regulators whose objective is to improve, coordinate, and harmonize regulation of the Canadian capital markets.

The Investor Protections and Improvements to the Regulation of Securities is a United States Act of Congress, which forms Title IX, sections 901 to 991 of the much broader and larger Dodd-Frank Wall Street Reform and Consumer Protection Act of 2010. Its main purpose is to revise the powers and structure of the Securities and Exchange Commission, credit rating organizations, and the relationships between customers and broker-dealers or investment advisers. This title calls for various studies and reports from the SEC and Government Accountability Office (GAO). This title contains nine subtitles.