The 2002 version contains more than 8,000 entries covering most areas of mathematics at a graduate level, and the presentation is technical in nature. The encyclopedia is edited by Michiel Hazewinkel and was published by Kluwer Academic Publishers until 2003, when Kluwer became part of Springer. The CD-ROM contains animations and three-dimensional objects.

The encyclopedia has been translated from the Soviet Matematicheskaya entsiklopediya (1977) originally edited by Ivan Matveevich Vinogradov and extended with comments and three supplements adding several thousand articles.

Until November 29, 2011, a static version of the encyclopedia could be browsed online free of charge online. This URL now redirects to the new wiki incarnation of the EOM.

A new dynamic version of the encyclopedia is now available as a public wiki online. This new wiki is a collaboration between Springer and the European Mathematical Society. This new version of the encyclopedia includes the entire contents of the previous online version, but all entries can now be publicly updated to include the newest advancements in mathematics. All entries will be monitored for content accuracy by members of an editorial board [1] selected by the European Mathematical Society.

In mathematics, the ascending chain condition (ACC) and descending chain condition (DCC) are finiteness properties satisfied by some algebraic structures, most importantly ideals in certain commutative rings. These conditions played an important role in the development of the structure theory of commutative rings in the works of David Hilbert, Emmy Noether, and Emil Artin. The conditions themselves can be stated in an abstract form, so that they make sense for any partially ordered set. This point of view is useful in abstract algebraic dimension theory due to Gabriel and Rentschler.

The Encyclopædia Britannica is a general knowledge English-language online encyclopaedia. It was formerly published by Encyclopædia Britannica, Inc., and other publishers. It was written by about 100 full-time editors and more than 4,000 contributors. The 2010 version of the 15th edition, which spans 32 volumes and 32,640 pages, was the last printed edition.

The Great Soviet Encyclopedia is one of the largest Russian-language encyclopedias, published by the Soviet Union from 1926 to 1990. After 2002, the encyclopedia's data was partially included into the later Bolshaya Rossiyskaya entsiklopediya in an updated and revised form. The GSE claimed to be "the first Marxist–Leninist general-purpose encyclopedia".

Ivan Matveevich Vinogradov was a Soviet mathematician, who was one of the creators of modern analytic number theory, and also a dominant figure in mathematics in the USSR. He was born in the Velikiye Luki district, Pskov Oblast. He graduated from the University of St. Petersburg, where in 1920 he became a Professor. From 1934 he was a Director of the Steklov Institute of Mathematics, a position he held for the rest of his life, except for the five-year period (1941–1946) when the institute was directed by Academician Sergei Sobolev. In 1941 he was awarded the Stalin Prize. In 1951 he became a foreign member of the Polish Academy of Sciences and Letters in Kraków.

Ajima Naonobu, also known as Ajima Manzō Chokuyen, was a Japanese mathematician of the Edo period.

Aida Yasuaki also known as Aida Ammei, was a Japanese mathematician in the Edo period. 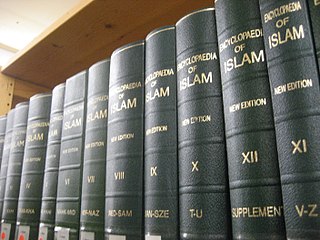 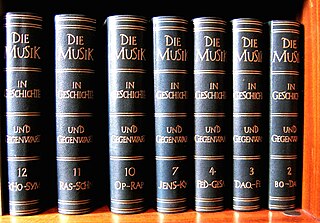 Die Musik in Geschichte und Gegenwart is the largest and most comprehensive German encyclopedic dictionary, and among Western music reference sources, only The New Grove Dictionary of Music and Musicians is comparable to it in size and scope. It is published by Bärenreiter-Verlag in collaboration with J. B. Metzler'sche Verlagsbuchhandlung.

Non-classical logics are formal systems that differ in a significant way from standard logical systems such as propositional and predicate logic. There are several ways in which this is done, including by way of extensions, deviations, and variations. The aim of these departures is to make it possible to construct different models of logical consequence and logical truth.

In mathematical logic, abstract algebraic logic is the study of the algebraization of deductive systems arising as an abstraction of the well-known Lindenbaum–Tarski algebra, and how the resulting algebras are related to logical systems. 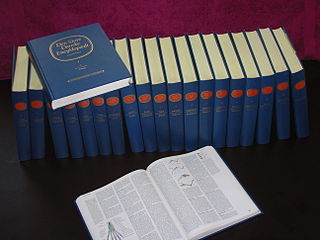 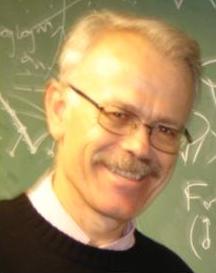 Themistocles M. Rassias is a Greek mathematician, and a Professor at the National Technical University of Athens, Greece. He has published more than 300 papers, 10 research books and 45 edited volumes in research Mathematics as well as 4 textbooks in Mathematics for university students. His research work has received more than 16,000 citations according to Google Scholar and more than 5,000 citations according to MathSciNet. His h-index is 47. He serves as a member of the Editorial Board of several international mathematical journals.

Al-Hassar or Abu Bakr Muhammad ibn Abdallah ibn Ayyash al-Hassar was a Muslim mathematician from Morocco, living in the 12th century. He is the author of two books Kitab al-bayan wat-tadhkar, a manual of calculation and Kitab al-kamil fi sinaat al-adad, on the breakdown of numbers. The first book is lost and only a part of the second book remains.

Emily Rolfe Grosholz is an American poet and philosopher. She is Edwin Erle Sparks Professor of Philosophy, African American Studies and English, and a member of the Center for Fundamental Theory / Institute for Gravitation and the Cosmos, at the Pennsylvania State University.

Helaine Selin is an American librarian, historian of science, ethnomathematician, author and the editor of several bestselling books.

Michiel Hazewinkel is a Dutch mathematician, and Emeritus Professor of Mathematics at the Centre for Mathematics and Computer Science and the University of Amsterdam, particularly known for his 1978 book Formal groups and applications and as editor of the Encyclopedia of Mathematics.

In the mathematical field of topology, there are various notions of a P-space and of a p-space.