Saint Engelmund (Engelmond, Ingelmund) of Velsen (died May 14, c. 739) was an English-born missionary to Frisia. He was educated in his native country and entered the Benedictine Order. He was ordained a priest and later became an abbot.

Although born in England, he had lived in Friesland with his parents and so knew the language. [2] He traveled to Frisia to join Saint Willibrord in evangelizing the region. Engelmund was based at Velsen near Haarlem, where he later died at an advanced age, of fever. [3]

Saint Engelmund is depicted as a pilgrim abbot with a fountain springing under his staff. [4]

Saint Boniface, born Winfrid in the Devon town of Crediton in Anglo-Saxon England, was a leading figure in the Anglo-Saxon mission to the Germanic parts of the Frankish Empire during the 8th century. He organised significant foundations of the church in Germany and was made archbishop of Mainz by Pope Gregory III. He was martyred in Frisia in 754, along with 52 others, and his remains were returned to Fulda, where they rest in a sarcophagus which became a site of pilgrimage. Boniface's life and death as well as his work became widely known, there being a wealth of material available—a number of vitae, especially the near-contemporary Vita Bonifatii auctore Willibaldi, legal documents, possibly some sermons, and above all his correspondence. He became the patron saint of Germania, known as the "Apostle of the Germans". 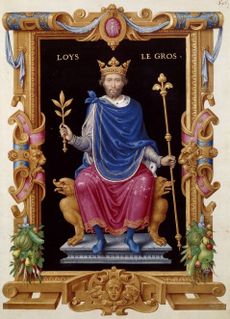 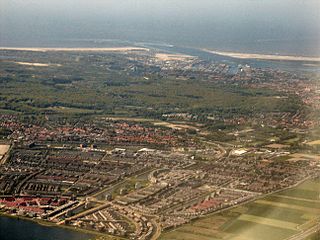 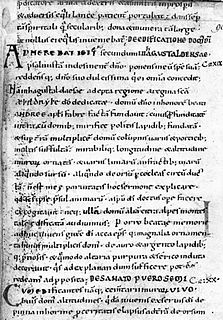 Willibrord was a Northumbrian missionary saint, known as the "Apostle to the Frisians" in the modern Netherlands. He became the first Bishop of Utrecht and died at Echternach, Luxembourg.

Osgyth was an English saint. She is primarily commemorated in the village of Saint Osyth, Essex, near Colchester. Alternative spellings of her name include Sythe, Othith and Ositha. Born of a noble family, she founded a priory near Chich which was later named after her.

Saint Ecgberht was an Anglo-Saxon monk of Northumbria and Bishop of Lindisfarne.

Saint Wigbert, (Wihtberht) born in Wessex around 675, was an Anglo-Saxon Benedictine monk and a missionary and disciple of Saint Boniface who travelled with the latter in Frisia and northern and central Germany to convert the local tribes to Christianity. His feast day is August 13.

Saint Wulfram of Fontenelle or Saint Wulfram of Sens was the Archbishop of Sens. His life was recorded eleven years after he died by the monk Jonas of Fontenelle. However, there seems to be little consensus about the precise dates of most events whether during his life or post mortem.

Saint Gregory of Utrecht was born of a noble family at Trier. His father Alberic was the son of Addula, who in her widowhood was Abbess of Pfalzel (Palatiolum) near Trier.. 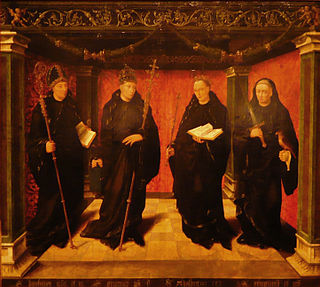 Saint Adalbert of Egmond was a Northumbrian Anglo-Saxon missionary. He was one of Saint Willibrord's companions in preaching the gospel in Holland and Frisia. 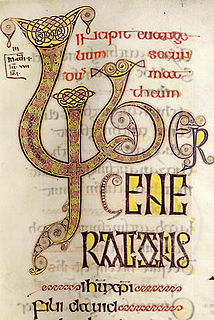 Anglo-Saxon missionaries were instrumental in the spread of Christianity in the Frankish Empire during the 8th century, continuing the work of Hiberno-Scottish missionaries which had been spreading Celtic Christianity across the Frankish Empire as well as in Scotland and Anglo-Saxon England itself during the 6th century. Both Ecgberht of Ripon and Ecgbert of York were instrumental in the Anglo-Saxon mission. The first organized the early missionary efforts of Wihtberht, Willibrord, and others; while many of the later missioners made their early studies at York. 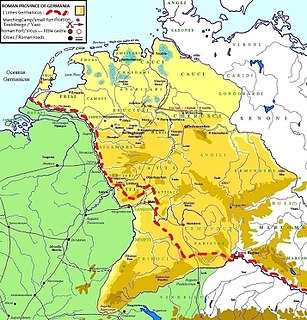 Flevum was a castrum and port of the Romans in Frisia, built when emperor Augustus wanted to conquer the German populated territories between the Rhine river and the Elbe river.

Hatebrand was a Benedictine abbot. A native of Frisia, Netherlands, he became the Abbot of Olden-Klooster, Frisia in 1183. He is famed for having revived the Benedictine order, in the area of Frisia.

Saint Credan of Evesham is a saint in the calendar of the Roman Catholic Church and of the Orthodox Church. He is also known in Latin as Credus or Credanus.

Saint Sturm, also called Sturmius or Sturmi, was a disciple of Saint Boniface and founder and first abbot of the Benedictine monastery and abbey of Fulda in 742 or 744. Sturm's tenure as abbot lasted from 747 until 779. 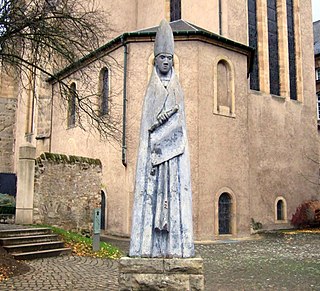 Wilgils of Ripon, also known as Wilgisl and Hilgis, was a seventh century saint and hermit of Anglo-Saxon England, who was the father of St Willibrord. His feast day is 31 January.