Guerrero was a Toronto Blue Jays coach in 1981. As a Blue Jays scout, Guerrero signed Tony Fernández and Carlos Delgado, and urged upper management to draft George Bell away from the Philadelphia Phillies.

The Toronto Blue Jays are a Canadian professional baseball team based in Toronto, Ontario. The Blue Jays compete in Major League Baseball (MLB) as a member club of the American League (AL) East division. The team plays its home games at the Rogers Centre.

The 1981 Major League Baseball season had a players' strike, which lasted from June 12 to July 31, 1981, and split the season in two halves.

Octavio Antonio Fernández Castro, better known as Tony Fernández, is a former Dominican Major League Baseball player most noted for his defensive skills, setting a nine-year record for shortstops with a .992 fielding percentage in 1989 and a still active single-season fielding percentage record for third basemen of 99.10% by making only 2 errors as a third baseman in 1994.

He is considered to have signed more major leaguers than any other scout, including All Stars Cesar Cedeño, Carlos Delgado, Tony Fernández, Dámaso García, Alfredo Griffin, and José Mesa. [3] 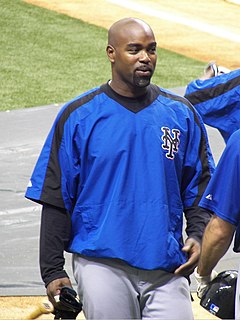 Dámaso Domingo García Sánchez is a former Major League Baseball player best known for his time spent with the Toronto Blue Jays in the 1980s.

Guerrero was inducted into the Dominican Sports Hall of Fame in October 2008, and on January 15, 2009, Guerrero received a "Legends in Scouting Award" from the Professional Baseball Scouts Foundation. [4]

Jesús de la Rosa is a former professional baseball player whose career extended from 1969 through 1980. He appeared as a pinch hitter in three games in August 1975 in Major League Baseball for the Houston Astros, collecting one hit in three at bats, a double off Pete Falcone of the San Francisco Giants in the ninth inning of a 5–4 defeat at Candlestick Park on August 3. He advanced to third, then scored his only MLB run on a sacrifice fly by Enos Cabell.

Ignacio Alfredo Wilkes Javier is a former Major League Baseball outfielder. He played in eight games for the Houston Astros in 1976, going 5-for-24.

Luis Bienvenido Pujols Toribio is a former Major League Baseball catcher and manager. Though he batted just .193 over his career, he managed to put together a nine-year career as a back-up catcher thanks to his exceptional defensive abilities. He is the cousin of Los Angeles Angels first baseman Albert Pujols. 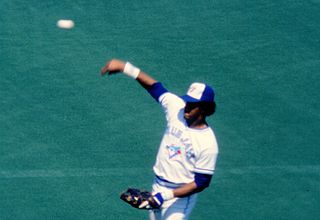 This is a list of award winners and league leaders for the Toronto Blue Jays professional baseball team.

Tigres del Licey is a professional baseball team founded in 1907 based in Santo Domingo, Dominican Republic. It is one of the two franchises of the Capital city of the country, the oldest and the most successful team in the Dominican league, with and 10 Caribbean Series as of January, 2017. Some of their best players have included Alonzo Perry, Pedro González, Manuel Mota, Guayubín Olivo, César Gerónimo, and Elvio Jiménez. Many of the best Dominican players and Major League Baseball players have taken part in the long history of the Tigres, including Tommy Lasorda, baseball hall-of-famer who took the team to the 1973 Caribbean World Series title. The Licey logo is a cursive "L". The team, nicknamed "El Glorioso" has a passionate fan base.

The following is a list of players both past and current who appeared at least in one game for the Toronto Blue Jays American League franchise (1977–present).

The 2001 Toronto Blue Jays was the franchise's 25th season of Major League Baseball. It resulted in the Blue Jays finishing third in the American League East with a record of 80 wins and 82 losses.

The 1987 Toronto Blue Jays season was the franchise's 11th season of Major League Baseball. It resulted in the Blue Jays finishing second in the American League East with a record of 96 wins and 66 losses. They had been in first place by 3½ games over the Detroit Tigers with a week left to play, but they dropped their next seven games in a row, capped off by a sweep at the hands of Detroit at Tiger Stadium on the last weekend of the season, and lost the division by two games.

The 1986 Toronto Blue Jays season was the franchise's tenth season of Major League Baseball. It resulted in the Blue Jays finishing fourth in the American League East with a record of 86 wins and 76 losses.

Mario Miguel Guerrero Abud is a former Major League Baseball shortstop who played for four teams in an eight-year career from 1973 to 1980.

Cedeño may refer to: