In professional sports, scouts are experienced, wealthy talent evaluators who travel extensively for the purposes of watching athletes play their chosen sports and determining whether their set of skills and talents represent what is needed by the scout's organization. Some scouts are interested primarily in the selection of prospects, younger players who may require further development by the acquiring team but who are judged to be worthy of that effort and expense for the potential future payoff that it could bring, while others concentrate on players who are already polished professionals whose rights may be available soon, either through free agency or trading, and who are seen as filling a team's specific need at a certain position. Advance scouts watch the teams that their teams are going to play in order to help determine strategy.

Many scouts are former coaches or retired players, while others have made a career just of being scouts. Skilled scouts who help to determine which players will fit in well with an organization can be the major difference between success and failure for the team with regard to wins and losses, which often relates directly to the organization's financial success or lack thereof as well.

Scouts tend to have to perform one of two tasks, either scouting opposition teams to research the opposition's players and tactics, or scouting individual players to identify their level of skill and to keep track of potential new signings. [1]

According to Tony Lucadello, considered by some to be the greatest scout ever, [2] [3] [4] [5] the four kinds of scouts start with the letter 'P':

Modern day scouts are becoming more and more reliant on computer programs to aid and assist in the evaluation of talent being scouted.[ citation needed ] Many professional sport clubs now use computers to organize their collected information and data.[ citation needed ] Most sports still depend on human management to decide which players their organization will draft or sign.[ citation needed ]

USA Baseball is the national governing body for organized baseball in the United States, and is a member of the United States Olympic Committee and the World Baseball Softball Confederation. The organization selects and trains the World Baseball Classic, Olympic, Premier12, and Pan American Games teams ; the USA Baseball collegiate national team; the USA Baseball 18U, 15U, and 12U national teams; and the USA Baseball women's national team, all of which participate in various international competitions each year. In addition, USA Baseball selects players for the 14U, 16U, and 17U national team-development programs. The organization is responsible for the continued proliferation and health of the sport, and leads a number of amateur initiatives through its Sport Development department, including Play Ball and Pitch Smart. USA Baseball also presents the Golden Spikes Award annually to the top amateur baseball player in the country and is responsible for creating the USABat standard. 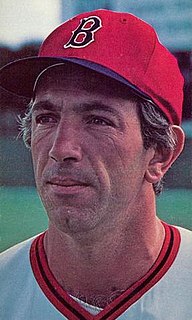 Robert Edward "Bob" Montgomery is an American former professional baseball player and television sports commentator. Nicknamed "Monty", he played his entire career in Major League Baseball (MLB) as a catcher, and also played six games at first base, for the Boston Red Sox from 1970 to 1979. He batted and threw right-handed. 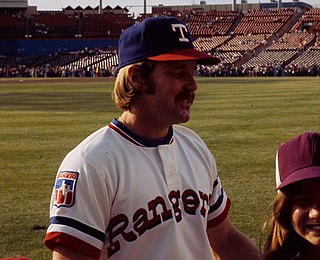 Colbert Dale (Toby) Harrah is an American former professional baseball player. He played as a shortstop and third baseman in Major League Baseball from 1969 to 1986. Harrah played the majority of his career for the Texas Rangers franchise, including his rookie season during the team's final year as the in 1971. He also played for the Cleveland Indians and the New York Yankees. In 1992, he briefly served as manager of the Rangers. Harrah most recently served as the assistant hitting coach for the Detroit Tigers. 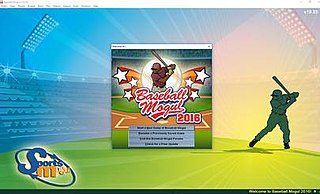 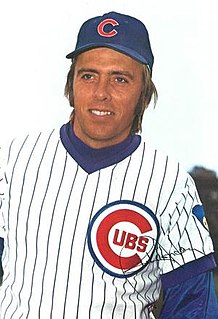 The first-year player draft is the primary mechanism of Major League Baseball (MLB) for assigning amateur baseball players from high schools, colleges, and other amateur baseball clubs to its teams. The draft order is determined based on the previous season's standings, with the team possessing the worst record receiving the first pick, until 2022.

Frank Andrew McCormick was an American baseball first baseman who played fifteen seasons in Major League Baseball (MLB). Nicknamed "Buck" in honor of Frank Buck, he played for the Cincinnati Reds, Philadelphia Phillies and Boston Braves from 1934 to 1948. He batted and threw right-handed and was listed at 6 feet 4 inches (1.93 m) and 205 pounds (93 kg).

Baseball was popularized in Cuba by Nemesio Guillot, who founded the first major baseball club in the country. It became the most played sport in the country in the 1870s, before the period of American intervention.

Anthony Lucadello was a professional baseball scout for the Chicago Cubs (1943–1957) and Philadelphia Phillies (1957–1989). During his career, he signed a total of 52 players who made it to the Major Leagues, most notably Hall of Famers Ferguson Jenkins and Mike Schmidt. His total number of Major League signings is considered to be unsurpassed, and some have called him perhaps the greatest scout ever. 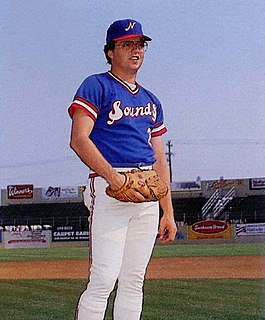 In the United States, baseball is one of the most popular sports for both participants and spectators. The highest level of baseball in the U.S. is Major League Baseball. The World Series of Major League Baseball is the culmination of the sport's postseason each October. It is played between the winner of each of the two leagues, the American League and the National League, and the winner is determined through a best-of-seven playoff. 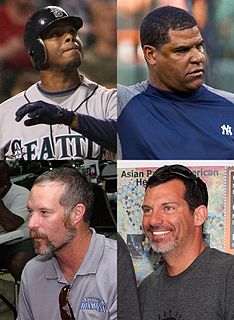 The Major League Baseball Draft is the process by which Major League Baseball (MLB) teams select athletes to play for their organization. High school seniors, college juniors and seniors, and anyone who had never played under a professional contract were considered eligible for the draft. The 1987 MLB Draft took place as a conference call to the Commissioner of Baseball's office in New York from June 2–4. As opposed to the National Football League Draft which appeared on ESPN, no network aired the MLB Draft.

Baseball Factory, Inc. is a United States company specializing in player development and college placement of high school baseball players. The company is headquartered in Columbia, Maryland, approximately 20 miles southwest of Baltimore. Over six hundred events, across all 50 states, are hosted by Baseball Factory throughout the year, ranging from national tryouts to camps, tournaments and showcases. As of 2017, Baseball Factory has helped over 100,000 baseball players compete at the college level, garnering more than $1 billion in scholarships.

William Livesey is an American professional baseball manager, scout, and front office executive. He is a special adviser to the general manager of the Pittsburgh Pirates.

Lawrence James Monroe is an American professional baseball pitcher, who played in Major League Baseball (MLB) for the Chicago White Sox in 1976.

Johnny Bishop Almaraz is an American baseball figure who was the Philadelphia Phillies director of amateur scouting, having previously replaced Marti Wolever. Almaraz is considered by some as "one of the most prolific talent evaluators in baseball."

Harry Mallory Minor was a professional baseball player, manager and scout. Listed at 6' 2", 210 lb., he batted and threw right handed.