Fabrizio De Angelis is an Italian director, screenwriter and producer.

Born in Rome, De Angelis started his career in the 1970s as a producer of genre films, often collaborating with Lucio Fulci, Joe D'Amato, Enzo G. Castellari and Umberto Lenzi. [1] In 1983 he adopted the stage name Larry Ludman and debuted as director and screenwriter with the action film Thunder Warrior , whose success led to two sequels. [1] [2] He got another major success with Il ragazzo del kimono d'oro (aka Karate Warrior), a ripoff of The Karate Kid which generated six films and a TV miniseries, all written, produced and directed by De Angelis. [1] [2]

Antonio Margheriti, also known under the pseudonyms Anthony M. Dawson and Antony Daisies , was an Italian filmmaker. Margheriti worked in many different genres in the Italian film industry, and was known for his sometimes derivative but often stylish and entertaining science fiction, sword and sandal, horror/giallo, Eurospy, spaghetti western, Vietnam War and action movies that were released to a wide international audience. He died in 2002.

Lucio Fulci was an Italian film director, screenwriter and actor. 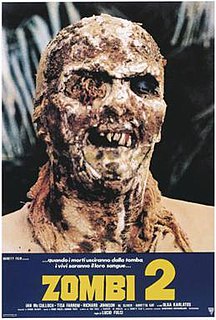 Zombi 2 is a 1979 Italian zombie film directed by Lucio Fulci. It was adapted from an original screenplay by Dardano Sacchetti to serve as a sequel to George A. Romero's Dawn of the Dead (1978), which was released in Italy with the title Zombi. It stars Tisa Farrow, Ian McCulloch, and Richard Johnson, and features a score by frequent Fulci collaborator Fabio Frizzi. Frizzi's score has been released independently of the film, and he has performed it live on tour. George Eastman is an Italian B-movie actor and screenwriter well known for his frequent collaborations with notorious director Joe D'Amato. He is most famous for his role as the insane, cannibalistic serial killer Klaus Wortmann in the gory 1980 horror film Antropophagus. He also played a similar role in its 1981 follow-up, Absurd. Both films were directed by D'Amato and written by Eastman.

Umberto Lenzi was an Italian film director, screenwriter and novelist.

Dardano Sacchetti is a screenwriter who often worked with Italian directors Lamberto Bava and Lucio Fulci.

Claudio Fragasso is a film director and screenwriter. Fragasso first attempted to make art films in the early 1970s, then became a screenwriter in the Italian film industry in the mid-1970s. Fragasso met director Bruno Mattei which led to a ten-year partnership from 1980 to 1990 during which the two worked together closely on films, with Fragasso's contributions often going uncredited. Fragasso's wife Rossella Drudi was also a screenwriter and collaborated with him on a number of projects. Fragasso would later go on to write and direct his own films in the 1980s, including Monster Dog with rock musician Alice Cooper and After Death. Fragasso made Troll 2 in 1989 which was later the topic of the documentary film Best Worst Movie which discussed the film's fandom.

Zombie Holocaust is a 1980 Italian horror film directed by Marino Girolami. The film is about a team of scientists who follow a trail of corpses in New York to a remote indonesian island where they meet a mad doctor who performs experiments on both the living and dead in his laboratory. The team face both zombies and cannibals in an attempt to stop the doctor. The film was re-edited and released theatrically in the United States in 1982 under the title Doctor Butcher M.D. 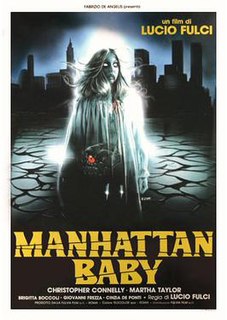 Manhattan Baby is a 1982 Italian horror film directed by Lucio Fulci, starring Christopher Connelly and Carlo De Mejo. The film begins in Egypt where Susie, the daughter of archaeologist George Hacker is given a mysterious talisman from an old woman while her father is investigating in a tomb where he becomes blind after being exposed to a blue light. Back in New York, George slowly begins to recover his vision as strange deaths begin to occur around them with the cause seemingly to be the medallion. 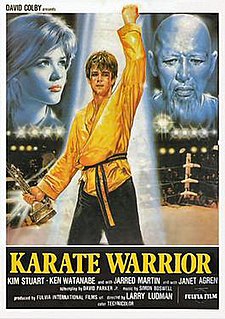 Karate Warrior, also known as Fist of Power or The Boy in the Golden Kimono is a 1987 Italian martial arts drama film directed by Fabrizio De Angelis as Larry Ludman. The film became the first in a series, spawning five sequels.